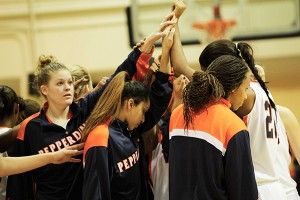 Despite a mostly successful month for the Waves, the past week’s losses are a bitter after- taste on earlier wins.

The men’s volleyball team, ranked No. 4 in the nation, broke their three-match win- ning streak with two losses to the University of Hawaii this past weekend: 3-2 on Friday and 3-0 on Saturday. Fortu- nately, the men have a chance to boost their season’s record with a big home game against USC on Friday at Firestone Fieldhouse and a game at Long Beach State next Wednesday.

The USC Trojans have had two wins and two losses this season and are just coming off of a 3-1 loss to the University of the Pacific, who Pepperdine beat 3-0 earlier this month.The Trojans also lost 3-0 to UCSD this winter, another one of the Waves vanquished foes on the court. Hopefully the Waves easy wins over what the Trojans considered tough opponents will help us going into Friday’s game.

While men’s volleyball is facing a small rough patch, it has been smooth sailing for the men’s tennis team, ranked No. 7 in the country. The Waves are 4-0 for the season, beating the University of the Pacific 7-0, University of Washington 6-1, University of Denver 7-0 and FSU 5-2, all in just one week.

The win against FSU has qualified the men for the Inter- collegiate Tennis Association’s National Indoors in Seattle, in mid-February. Before that, the Waves will host the University of Texas this Sunday at noon. The Longhorns are 4-1 and play USC two days before they come to Malibu.

Another Waves team of note is the women’s tennis team, ranked No. 33 in the Intercollegiate Tennis Associ- ation. They will kick off their spring season on Thursday at 1:30 p.m. against USC. The Trojans are ranked No. 4 and are 3-0 so far this season, but hopefully the Waves will have home-court advantage. The next day, the Waves will host the Fresno State Bulldogs, ranked No. 59.

But the men on the tennis team aren’t the only Waves winning right now. The men’s basketball team beat confer- ence rival LMU 60-57 at their house, breaking the Waves three-game losing streak and bringing them to a 10-9 season record. An 84-72 loss at Saint Mary’s on Saturday, however, brought them to an even 10- 10, despite sophomore Jor- dan Baker’s best efforts, scor- ing more than 20 points for the third time in the past five games.

Regardless, the team is do- ing better than in previous sea- sons and is experiencing the first winning non-conference record (8-5) since the 2004-05 season. “We are very optimistic about our start…[the team is] exceeding expecatations right now, like Stacy Davis, who is projected to be the Freshman of the Year in the WCC. There is a lot to be excited about!” said Coach Bryant Moore.

The Waves have a winning record in Malibu and hope to utilize their home-court advantage for the two home games this week. On Thursday, the men face the BYU Cougars, who are 16-6 overall and 6-2 within the West Coast Conference. On Saturday, the Waves host the USF Dons, who are 9-12 on the season and, like the Waves, have only two WCC wins, the latest be- ing to Gonzaga.

The women’s basketball team has been a bit more con- sistent than the men, but not in the best way. The Lady Waves have suffered five straight losses and have just one win to show for the month of January. On Thursday night, they play at the University of Portland against the 7-13 Pilots. The following

Sunday, the Waves travel to Spokane to play WCC rival Gonzaga, one of the top teams in the conference. The Waves hosted Gonzaga last Thursday, Jan. 24, and lost 80-46.

When freshman Taylor Barnett came to Pepperdine, she was excited to have a Malibu ZIP code and be surrounded by the beautiful...
Copyright 2013 Jupiter Premium Magazine Theme
Back to top