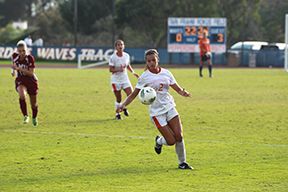 The Pepperdine women’s soccer team (12-4-0) came back on track after a tough 3-0 loss to PCH rival Loyola Marymount on Oct. 19 by notching a 2-0 victory over San Diego University on Saturday.

Pepperdine led the game by a series of attacks in the first half at Torero Stadium. Senior forward Anisa Guajardo scored in the 17th minute after receiving a corner kick from junior defender/forward Michele Pao. Freshman defender Mandy Davis scored in the second half, ensuring victory for the Waves.

“We are very pleased with the results, that’s one of the best performances of the year,” said Head Coach Tim Ward. “If we win the next four games, we will be WCC Champions. It won’t be easy to do. We have very high quality opponents. However, we will do our best.”

The victory was a brilliant comeback after the horrific defeat of the Waves to LMU, when the Lions managed to score three goals in only 11 minutes of the first half.

Pepperdine is ranked No. 18 in the nation, falling from No. 15 after the recent loss to LMU. This places the Waves only one spot behind WCC competitor Santa Clara (9- 3-4). BYU is the third WCC team currently ranked in the top twenty, sitting comfortably at No. 15,

The Waves will head to Portland on Oct. 26 before taking on Gonzaga in Spokane, Wash. Oct. 28.

Michelle Obama to hold fundraiser at Will Smith's house in Malibu

Michelle Obama to hold fundraiser at Will Smith's house in Malibu

First Lady Michelle Obama will be traveling to Malibu today, Oct. 25, for a fundraiser being held at Will Smith's home, according...
Copyright 2018 Pepperdine Graphic
Back to top