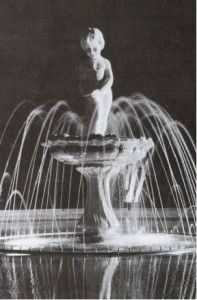 The annual Founder’s Day celebration will take place on Wednesday. As Pepperdine’s 75th anniversary comes to a close, this Founder’s Day itinerary will feature the return of a George Pepperdine College icon: “Dolores.” When the historic statue returns to campus on Sept. 19, she will appear in her original 1941 form.

Each year, the Pepperdine community convenes in Firestone Fieldhouse for a processional that commemorates the vision of George Pepperdine, the university’s founder. This year’s processional and program will include Olympians and the Pepperdine orchestra and choirs, among other elements. Students, faculty, staff and alumni will come together for a special Convocation honoring Pepperdine’s motto, “Freely ye received, freely give” (Matthew 10:8). Following the Convocation led by Provost Darryl Tippens, attendees will partake in a complimentary luncheon in Alumni Park. The day will conclude in Adamson Plaza when the Dolores statue unveiling and dedication will take place at 1:30 p.m.

Before Willie the Wave became Pepperdine’s official mascot, the school had an unofficial icon: a 2-year-old girl carved in white stone atop a fountain. The fountain made its debut at the Los Angeles campus in 1941, located in the center of the old GPC campus. Students dubbed the statue “Dolores.”

“Although her name has multiple origin myths, I’m most partial to its derivation from ‘Dolor,’ a mythological nymph that personifies sorrow (and possibly the official name of the statue),” wrote Kevin Miller, librarian for digital curation and publication at Pepperdine.

As Pepperdine transformed, so did the beloved statue. Dolores was redesigned and modified more than once. Like the Rock today, it became a campus tradition to decorate, paint and even dress Dolores.

Standing at two-and-a- half-feet tall and weighing 80 pounds, she was the frequent target of pranksters. Dolores was stolen multiple times and occasionally damaged by students and school rivals. During one of Dolores’ many disappearances, the 1959 Graphic staff joined in the search effort, writing, “Until Dolores returns, Pepperdine’s ardent swains have no one to tell their troubles to… she must be found.”

In 1982, Dolores moved to the Malibu campus in front of the Tyler Campus Center. Her nearly 50-year reign came to an end in the late 80s when the statue disappeared and did not return.

“There have been multiple versions of Dolores since her first installation on the Los Angeles campus,” said Jennifer Carver, assistant director of university events. “We felt that after all these years, she deserved to feel like her old self again, so great effort was made to recreate the original Dolores as seen in 1941.”

Students can look forward to the reading of George Pepperdine’s dedicatory remarks from 1937, delivered by former Pepperdine President William Banowsky. For the statue unveiling, alumni of GPC will be in attendance.

The special Wednesday Morning Chapel begins at 10 a.m. and is expected to run over the usual one-hour timeslot. Because of this, classes will start 15 minutes after Convocation ends.

Live from London: Bonding with the locals

Live from London: Bonding with the locals

One of the best parts of London is that there is no language barrier, which should make it easier to meet locals. However,...
Copyright 2013 Jupiter Premium Magazine Theme
Back to top