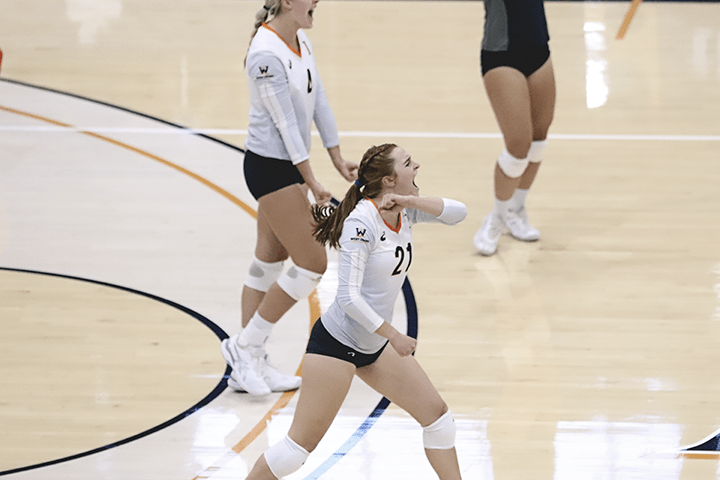 Sophomore defensive specialist Kayla Joyce celebrates a Pepperdine point during the Waves’ 3-0 victory over Gonzaga on Friday, March 5 at Firestone Fieldhouse. Joyce, a transfer from Chico State, recorded six digs in the win.

Days earlier, the Waves swept No. 12 BYU at home, pushed the Cougars to five sets the following night, then traveled to No. 6 Baylor and battled the Bears to five sets as well. The team’s trip to Waco, Texas, did not affect its performance in a 25-14, 25-19, 25-20 defeat of the Zags on Friday, March 5.

“It could have been kind of a trap game for us, but we took care of business in practice when we got back from Baylor,” sophomore defensive specialist Kayla Joyce said following Friday’s victory. “That was really, really important in setting up today’s match.”

The Waves returned to Malibu as a national top-25 team for the first time since November 2012, earning the No. 25 spot in the American Volleyball Coaches Association rankings.

“I’m happy for our girls,” sixth-year Head Coach Scott Wong said. “They deserve the national ranking. They deserve everything they’ve earned this year. It means a lot to the program in the growth of what we’ve accomplished over the last few years.”

The Bulldogs entered the doubleheader in Malibu with a 3-7 record, but the Waves took the numbers with a grain of salt. In order to maintain sole possession of second place in the WCC standings, Pepperdine needed to defeat Gonzaga in both matches.

“Gonzaga’s record doesn’t reflect who they are as a team,” Wong said. “They’ve played some really good volleyball. I’m proud of our team for how they played and how they offensively attacked Gonzaga.”

In Friday’s sweep, the Waves put up staggering offensive numbers — each of the team’s primary pin hitters hit at least .400. Senior outside hitter Shannon Scully led the charge with 15 kills on a .469 hitting percentage, plus 9 digs.

Scully credited sophomore setter Isabel Zelaya, who entered the match leading the WCC in assist per set, for Pepperdine’s offensive output. Zelaya added 38 more assists along with 12 digs in the match, leading all players in both categories.

Scully has found her rhythm as the season develops. After the first six WCC matches of the season, Scully averaged 3.04 kills per set. In the most recent four WCC matches, since she is averaging 4.25 kills per set, and her hitting percentage improved from .261 to .291.

Scully and freshman outside hitter Emma Ammerman led the Waves with five kills apiece in a dominant first set victory Friday. Junior outside hitter Rachel Ahrens tallied three of her five service aces in the first set of the match, all coming during a service series that extended a 17-10 lead to 21-10.

Ammerman and Ahrens were the other two Pepp hitters who hit .400 or higher in the match.

In the second set, the Waves defense took over. While the offensive output dipped slightly from .357 to .300 from the first set to the second, the back row extended rallies and refused to allow the ball to touch the floor.

Joyce and junior libero Madison Shields patrolled the back row and notched six and 12 digs in the match, respectively.

“We definitely have this bond on the court where we know exactly where we’re at and mentality to not let anything drop,” Joyce said.

Gonzaga jumped out to a 7-3 lead in the third set, but Pepperdine immediately responded with consecutive double blocks by Zelaya and freshman middle Meg Brown. Wong said the block was a facet that needed improvement following Friday’s match.

“Our blocking can get a little better,” Wong said. “I feel like our timing was a little off.”

Collectively, the Waves defense held the Zags to .032 hitting in the third set, pulling away to win 25-20 and sweep the match.

“Our floor defense is great,” Wong said. “We saw the tip, we read it well. We took the ball and put it up in good positions.”

Joyce, a transfer from Chico State, has been a welcome addition to the starting lineup in recent matches. Following the graduation of four-year starting libero Hana Lishman, Wong has seen the development of the floor defense over the course of the first eleven games of the season.

“It’s been awesome to see that development because I feel like that has been a big development of our team — just not letting the ball hit the floor,” Wong said.

“[Assistant Coach] Steve [Astor] has been doing a great job of helping us with our blocking at practice and that’s something we’ve been really focusing on this year,” Scully said.

As the team prepares for upcoming doubleheaders against Portland and Loyola Marymount, two teams below them in the WCC standings, the goal of winning the program’s first WCC title since 2011 remains on their minds.

“Game by game, people are going to show up here and they’re going to give their best,” Joyce said. “We expect that and we’re ready for it.”

In Monday’s AVCA rankings, the Waves moved up one spot to No. 24 in the nation.