W. Volleyball Sweeps BYU At Home in 3, First Time in a Decade 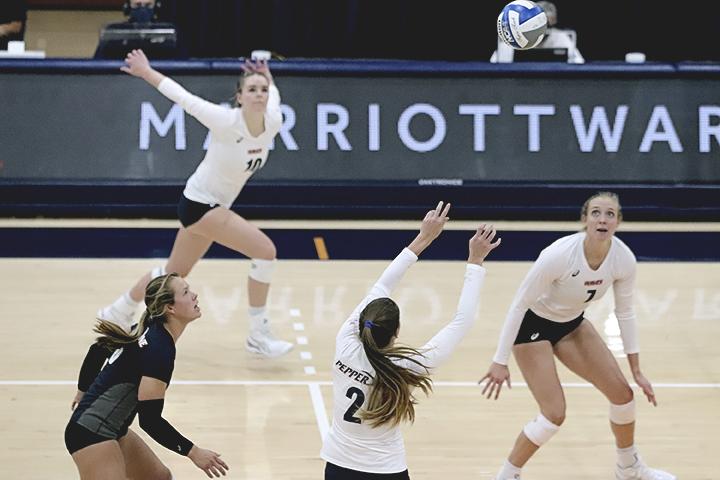 Sophomore setter Isabel Zelaya (No. 2) pushes an outside set to senior outside hitter Shannon Scully (No. 10), while junior libero Madison Shields (No. 6) and senior middle Alli O’Hara (No. 7) cover the hit in Firestone Fieldhouse on Feb. 23. The Waves maintained their undefeated status at 7-0 by sweeping No. 12 BYU in three sets.

Pepperdine Women’s Volleyball swept No. 12 BYU at home in three sets, placing the Waves at number two in the West Coast Conference and ending a 10-year losing streak against the Cougars.

“It’s awesome — we are speechless,” said senior outside hitter Shannon Scully. “We expected that we could do this, and we prepared for this all week, and just to see us play our best and come out with a win a sweep is just awesome. We’re really excited.”

The Waves started the night strong and aggressive on offense, with junior outside hitter Rachel Ahrens earning the first kill of the night and junior libero Madison Shields slamming 2 aces in Pepperdine’s first 10 points. 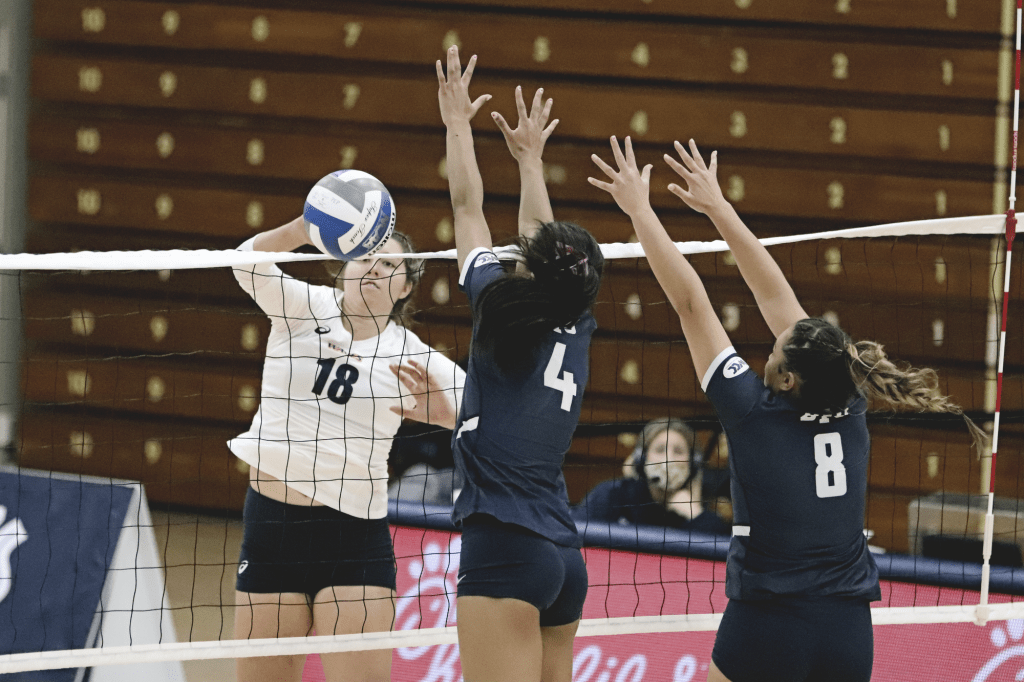 Junior outside Rachel Ahrens swings past the BYU block. Ahrens racked up 14 kills over the course of the match, hitting a .333 average. Photo credit: Ali Levens

“I think we did a really good job of coming in really prepared,” said sophomore setter Isabel Zelaya. “We knew the game plan and we just played together.” 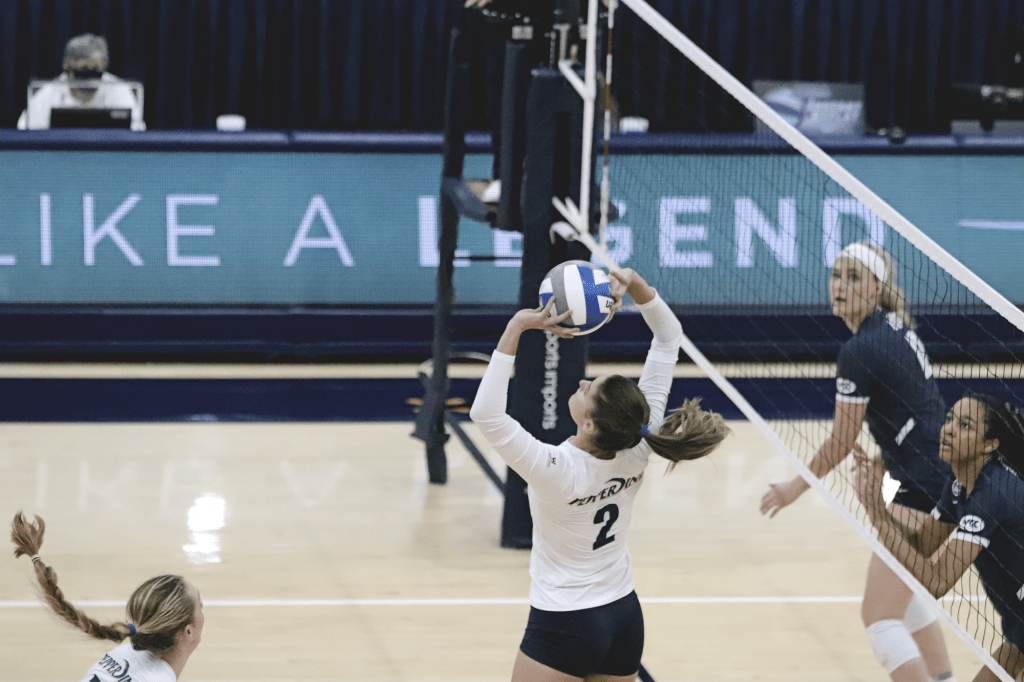 Zelaya arches back to set O'Hara. The Waves had a .349 hitting average for the match. Photo credit: Ali Levens

BYU didn’t put up much of a defense, with the Waves offense at .349 hitting average for the match. Switching up the offensive attack, Zelaya set 43 assists for the match, running smart, quick plays out of the front and back row.

“We’ve been working a lot of things and our auto-system hitting, man it showed tonight,” said Head Coach Scott Wong.

The Waves kept a substantial lead throughout the first set. The Cougars pushed back at match point, taking four points with Pepperdine still at 24, but the team rallied, ending the set with an exceptional dig by Shields and a smart tip by freshman opposite Emma Ammerman.

The second set started strong with a kill from freshman middle blocker Meg Brown, who was named the WCC Defensive Player of the Week on Monday.

“Meg has been awesome,” Wong said. “She’s not only offensively — but as we saw with the Defensive Player of the Week — defensively as a blocker, she is stuffing balls and she’s reliable. She’s somebody that carries a big load for us as a freshman and I am constantly amazed on how she approaches the game and how she wants to keep on pushing the limits on her own boundaries.”

The two teams battled it out early in the second set, tying at 10-10 as the Waves defense readjusted. After a Cougar service error, Ahrens dominated the court, slamming a kill, combing with senior middle Alli O’Hara for a double block and logging another kill to give Pepperdine momentum and a four-point lead that they extended for the rest of the set.

In the third and final set, the score started tight at 3-3, but the Waves used their momentum to re-establish their lead and finish the night strong.

Scully stepped up throughout the match, racking up 8 kills in the last set alone, ending the night with 18 kills and a .389 hitting average. 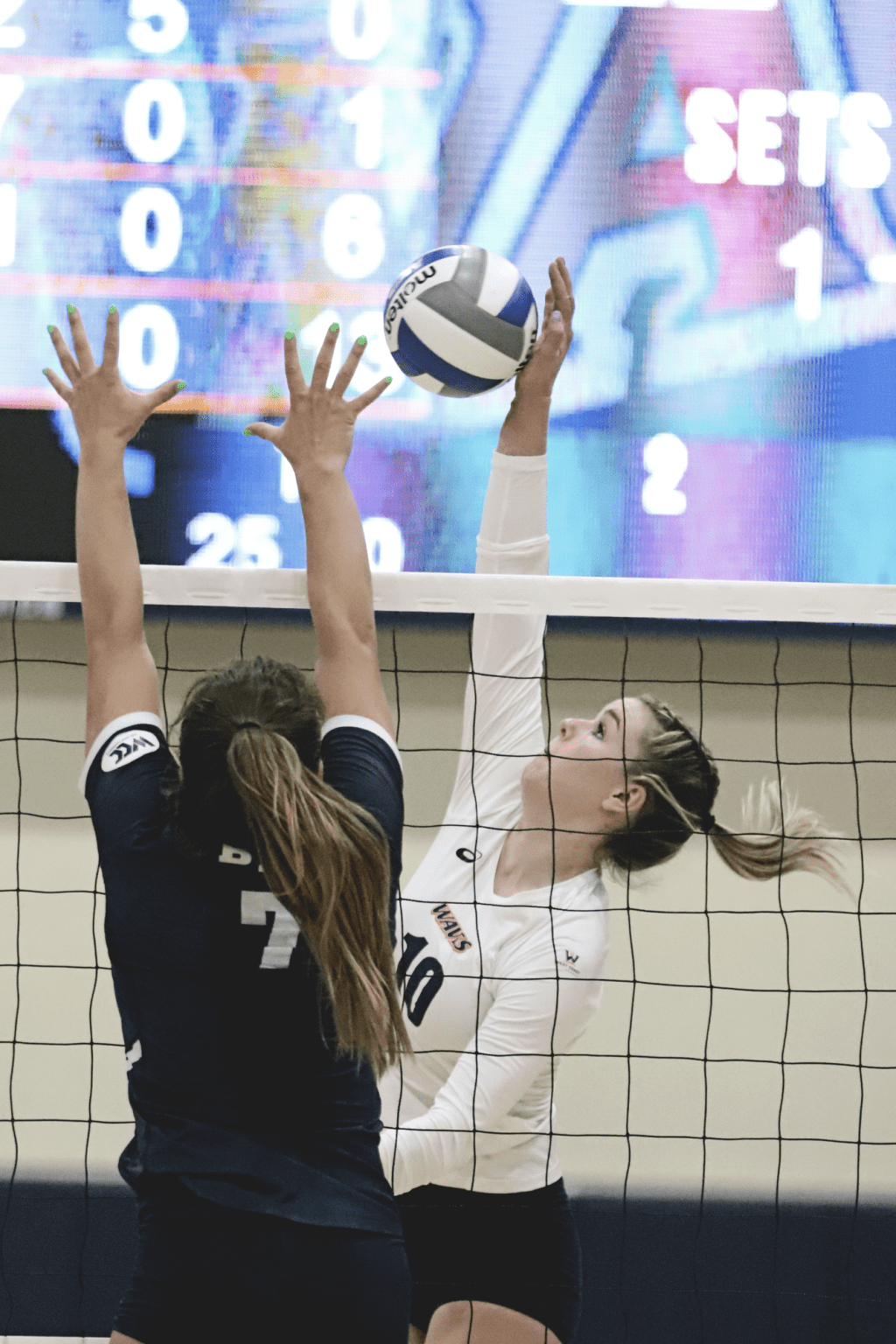 Scully reaches over the Cougar Block. The senior stepped up in the third match of the night, ending with the most kills (18) of the match. Photo credit: Ali Levens

“I think everyone was doing their job, which made it really easy for us to flow and you know, makes it easy for me to do my job, so I’m really happy,” Scully said.

For the majority of the night, Pepperdine dominated by scrappy defensive plays and smartly placed balls, evading the Cougar block by making short tips and hard line drives.

Ahrens demonstrated this best, alternating her swing throughout the night and racking up 14 kills with a .333 average for the match and the honor of the final kill of the night.

The Waves defense remained crucial in holding back Cougar attacks, with Shields leading in the back row and collecting 18 of the team’s 54 digs of the match.

Pepperdine faces BYU again tomorrow night in Firestone Fieldhouse at 7.p.m., PST, and the team is fired up for another round.

“Our team goal this season is to win the WCC so this is just another step in the right direction,” Scully said “We’re gonna enjoy this win tonight and come back ready to play tomorrow.” 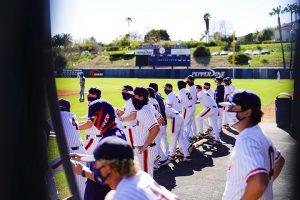 The Pepperdine dugout watches during game two against CBU on Feb. 20. This was Pepperdine's first victory on Eddy D. Field...
Copyright 2013 Jupiter Premium Magazine Theme
Back to top