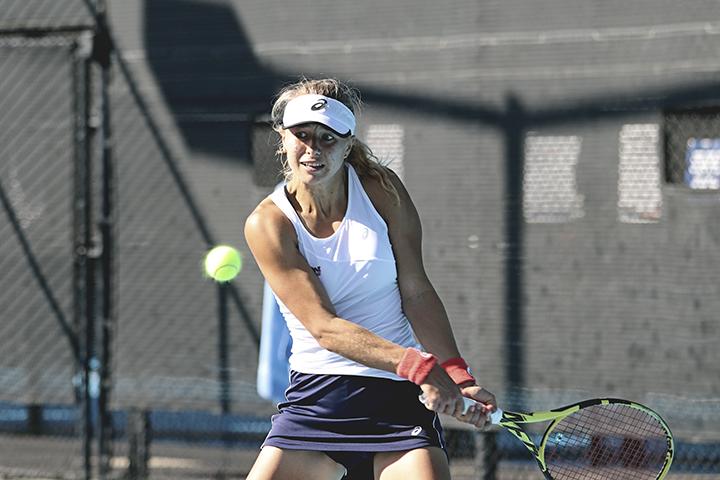 Taking the court following a two-week break from matches, Pepperdine Women’s Tennis did not miss a beat.

The No. 4 Waves defeated No. 13 Oklahoma State 4-0 Friday, Feb. 26, at the Ralphs-Straus Tennis Center, winning the doubles point and then taking singles courts four, five and six.

“For a while there, we were relying on one, two and three, and so it’s nice to see four, five and six pull the weight because we’re going to need that to be a really good team,” Head Coach Per Nilsson said.

Coming off the layoff without a match, the Waves were efficient and effective. The extra practice time allowed the coaching staff to fine-tune doubles pairings and the group’s conditioning.

“Our coaches used the time — we practiced a lot,” freshman Taisiya Pachkaleva said. “We did hard fitness. The results of our hard practice is that we won today.”

“As a freshman, I’m getting used to playing with the new girls,” Pachkaleva said. “It’s getting better and better. We’ve practiced more doubles and tried to improve it.”

The matchup on court one between Pepperdine’s Jessica Failla and Shiori Fukuda and the Cowgirls’ No. 34-ranked doubles pairing of Ayumi Miyamoto and Bunyawi Thamchaiwat was tied 3-3 and went unfinished.

At the ITA Indoor National Championships in early February, the Waves failed to win the doubles point in each of their three matches, so the development of the doubles pairings was encouraging for Nilsson.

“Being at home and having a weekend off without matches helps us to work on some doubles,” Nilsson said. “Just figuring out some doubles pairings that we know could work, and then being able to practice together for a little bit — we didn’t have that before Stillwater, so that’s definitely showing.”

In singles, the young Waves on courts four, five and six got the job done.

Redshirt freshman Lexi Ryngler did not play due to shoulder inflammation, so Redelijk earned the No. 6 singles spot for the match. Redelijk did not disappoint, dominating Lenka Stara 6-0, 6-4 for Pepperdine’s first singles victory of the afternoon.

Zaar moved up to court five and beat Medvedeva in straight sets, 6-4, 6-1.

“That’s the benefit of having a deep roster — you have people that are good that can come in,” Nilsson said. “We’re still tinkering with our lineup to see what we need to do for the end of the year.”

On court four, Pachkaleva, a native of Moscow, Russia, played Dariya Detkovskaya. Pachkaleva, ranked No. 88 in the country in the ITA’s most recent rankings, defeated Detkovskaya 6-0, 3-6, 6-1 for her fourth consecutive singles victory.

Pachkaleva said she is beginning to enjoy home matches at Ralphs-Straus.

“I love Pepperdine now and I’m honored to be here,” Pachkaleva said. “It’s just amazing to play at home. I consider it my home now and I want to win every match for Pepperdine.”

The victories by the three underclassmen clinched the match for Pepperdine before courts one, two and three finished.

Since the Cowgirls were to play a match the following day against USC, the coaches decided to end the match when one team clinched it instead of playing out all six singles matches.

On courts two and three, Pepperdine fifth-years Lahey (No. 1 in the country) and Fukuda (No. 12), respectively, were locked in close matches.

Fukuda led No. 77 Miyamoto 4-1 in the second set after falling 5-7 in the first. Lahey lost the first set to No. 24 Thamchaiwat after double-faulting on set point, but roared back to win the second set 6-0 before the match went unfinished in the third.

While Nilsson said Lahey needs to start matches better, he also said he is “not worried” about her performance.

“Ash hasn’t been on the practice court as much because of her injury that she had,” Nilsson said. “She’s a perfectionist. She wants to perform at a high level right away. I’m actually really happy with where she is.”

On court one, No. 33 Failla battled No. 104 Wolfberg, winning the first set 6-4 and going to a tiebreak in the second before the match was called. Failla has yet to lose a collegiate singles match in 2021.

The ITA has not released singles rankings in nearly two months, and the release schedule remains to be determined, according to the ITA’s Modified Ranking Plan. When they do finally come out, Failla will likely ascend.

“She deserves a high ranking,” Nilsson said. “She’s playing some of the best tennis in the country.”

As a team, the Waves will not depart Southern California for the entire month of March, as their schedule calls for five home matches and one at USC.

“Right now is not the best time to travel, obviously, and so we did this on purpose — we’re at home for awhile, or we’re locally,” Nilsson said. “In April, we have some travel then, but we’re hoping things have calmed down a little bit.”

Their next match is Friday, March 5, in Malibu against the University of California, Santa Barbara.

With another week of practice coming up, Nilsson and his fourth-ranked team will continue to work on small details and enjoy the time at home.