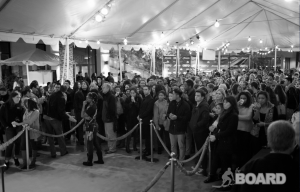 Courtesy of Kevin Arnold
ROLLING OUT THE RED CARPET — REEL STORIES offers a chance for celebrated filmmakers and newcomers alike to present their work in front of a riveted audience. The festival was held Friday Jan. 25.

It was lights, camera, action down at Joslyn Plaza last Friday night as Pepperdine’s 4th annual REEL STORIES Film Fest made its debut.

The event featured Pepperdine’s very own student filmmakers who were able to show their movies alongside feature length productions such as Alison Klayman’s “Ai Weiwei: Never Sorry” and Malik Bendjelloul’s Oscar-nominated film, “Searching for Sugarman.” Among the judges present were Academy Award–nominated filmmakers, critically acclaimed composers and Pepperdine’s very own director and head of  the Center for Entertainment and Media Culture, Craig Detweiler.

REEL STORIES Film Fest was founded in 2009 by university alumna Susie Lee (‘10)as an opportunity for student filmmakers to showcase their talent and unite the Pepperdine and Malibu communities. Since then, it has exploded, gaining popularity among undergraduate and graduate students alike. This year’s festival was bigger than ever, complete with a bouncer-equipped VIP section, a full-length red carpet and certified step-and-repeat.

“Everything is just phenomenal,” said graduate student Hayden Christensen. “There’s an incredibly high quality of films that just keeps getting better and better, and it’s a place where they can showcase great student films and gain exposure with professional people.”

With professional filmmaking also came professional prize money. In addition to the emblazoned crystal keepsakes that were given out was a cash prize of $1,000 awarded to the grand prize winners. While all the films presented a quality of hard work and excellence, two in particular won the audience’s and judges’ votes. Ben Holcomb’s touching “Currency” and David Chang’s heartwarming “Wendy” ultimately won over the crowds. The two films portrayed what critics claimed embodied the true meaning of REEL STORIES.

“It was my first time ever submitting a film to REEL STORIES,” said Holcomb. The student, who created Pepperdine’s comedic sitcom “The Beacon,” both produced and directed his film with the help of student composer Thomas Yee. His short film follows the daily exchange of hands that a dollar bill experiences and features a narrative of his 103-year-old grandmother.

“I always liked the idea of how big the world was and how we’re all connected,” Holcomb said. “It was interesting to see how tangible it was with a dollar bill.”

Holcomb’s grandmother, who hadn’t spoken much for three years, was able to find a voice for her performance. It took some editing skills, but Holcomb was eventually able to splice together the materials to create a beautiful eight-minute rendition of her dialogue.

“It is just a really great piece for my family to have of my grandmother,” Holcomb said in his acceptance speech.

“Wendy,” on the other hand, was a roller coaster through adventure and budding college romance.

“It was a great outlet for student creativity,” explained senior Titus Rhode, who acted in the film as Peter, a college student trying to get Wendy to attend his college. Though it was Rhode’s first time acting, he recalls the experience as nothing but enjoyable.

“There’s been a lot of anticipation about the film,” Rhode said.

As for the story itself, it details the journey of introverted community college student Wendy and her pursuit of a four-year university. Amid frat parties and a half-hearted detention by a rent-a-cop, Peter is able to show her the deeper meanings of youth.

“It’s a movie that shows that anything is possible, and even if you aren’t exactly looking for it you should just let [adventure] happen,” Rhode said.

Other student films included the horrifying thriller “No Visitors,” the comical “Molly,” the dramatic “Studio” and the unique and creative “Diptych: Donna Americana & Le Dejeuner.” All were well deserving of awards for exceptional work at the film festival.

“I filmed part of my movie in Florence,” said senior art major Mark Allen over his salmon pate. His piece was an abstract mish-mash of artistic imagery filmed with an 8mm camera.

“It’s very avant-garde, with no linear narrative,” Allen said. “It takes people out of their comfort zones where there is no need for words, that way they can have their own interpretations.”

As the night concluded, none were left wanting. The general consensus was that the film festival had been a success, including its atmosphere.

At a festival where the films are judged not only on the quality of their work but also on the substance of their message, REEL STORIES continues to present a thriving atmosphere of cultural enrichment for the Malibu and Pepperdine communities. The student work shown at the festival inspires and captivates audiences each year with their content. Pepperdine University can only hope to see REEL STORIES’ continued traction in the professional film community.

Pepperdine’s pick for a win on Sunday

Dance in Flight returns to Pepperdine and celebrates its 20th year on campus this week. The show, which opens tonight,...
Copyright 2013 Jupiter Premium Magazine Theme
Back to top