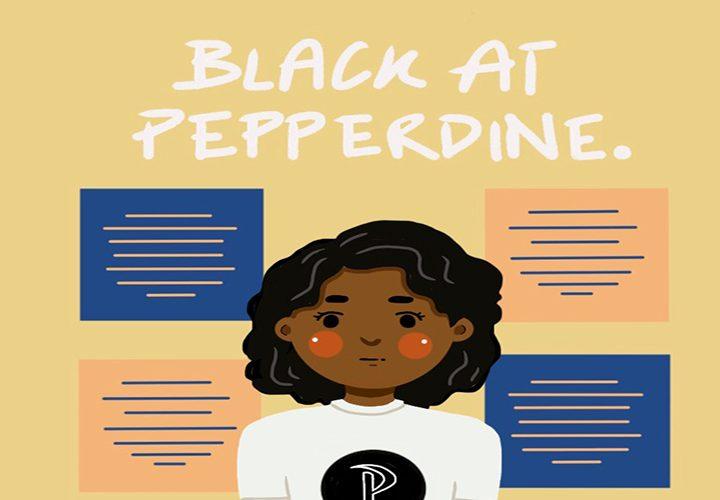 Garnering over 2,500 followers in just 5 weeks, the Instagram account @BlackAtPepperdine serves to document community stories of anti-Blackness and racism within Pepperdine’s campus.

On May 25, a few weeks before @BlackAtPepperdine was created, a 46-year-old Black man named George Floyd died during an arrest after allegedly passing a counterfeit $20 bill in Minneapolis. In response, people called for justice against police brutality as more than 140 protests rocked cities on a national scale. Meanwhile, Pepperdine community members called for a local response to the racial injustice found within Pepperdine’s campus.

In a letter posted July 9, the owner(s) stated that any posts are “not [their] opinions” and that they will “never publicly voice [their] opinions on the platform.” Their main intention is to “amplify voices, not propose arguments” within the Pepperdine community. The owner(s) of the account declined an interview with the Graphic, choosing to remain anonymous to uphold neutrality, confidentiality and their safety.

The owner(s) avoid adding captions to photos to uphold impartiality and all published content is at the discretion of the people who submit it to the account. If the name of an individual is submitted, it is not posted. These names are reported to the administration instead, according to the account. Only organization and group names are shared unless otherwise indicated. Names of faculty, staff and administrators are not made public either. 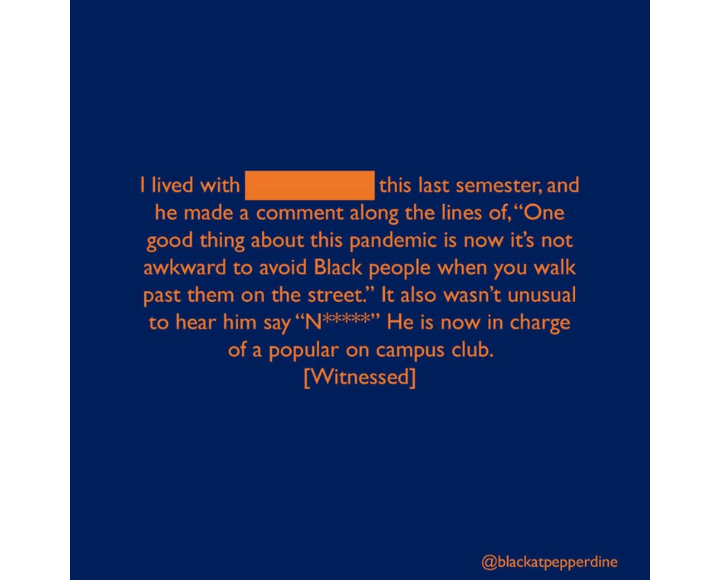 An anonymous Pepperdine student writes about witnessing an anti-Black and racist experience from the previous semester. The event was about another student using the N-word and wanting to avoid Black people. Courtesy of @BlackAtPepperdine Instagram account 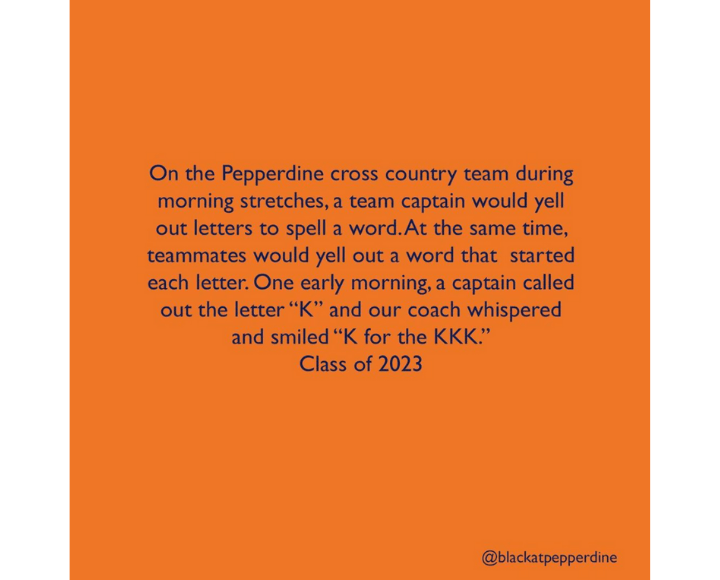 A Pepperdine Cross Country sophomore shares a story in which their coach whispered “K for KKK” during morning stretches. Courtesy of @BlackAtPepperdine Instagram account 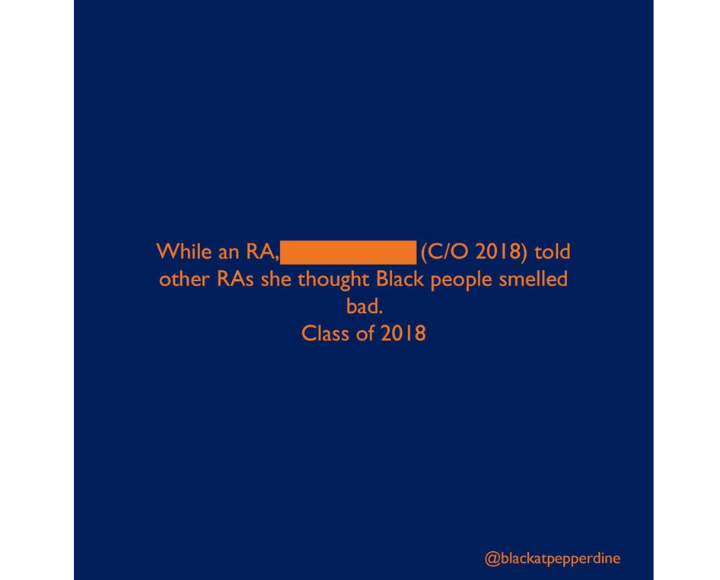 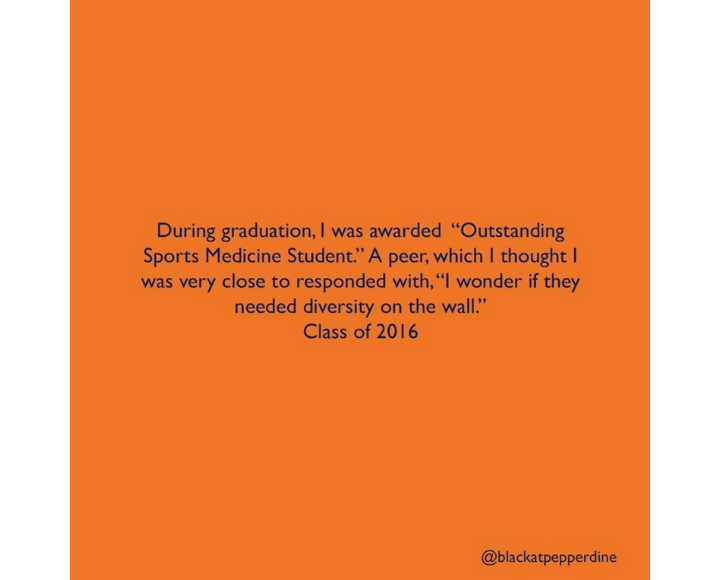 A Class of 2016 Pepperdine alumnus voices a racist comment made by a peer in response to their selection as an Outstanding Sports Medicine student. Courtesy of @BlackAtPepperdine Instagram account

From the Athletics department to Housing and Residence Life and the classroom setting, community members submitted their experiences of racism and anti-Blackness with over 260 shared stories as of Aug. 13, some dating as far back as the Pepperdine Class of 2003.

A recent post published anonymously on @BlackAtPepperdine mentions President Jim Gash as the successful presidential candidate who “joked that he was basically an ‘African American’ because he holds dual citizenship in both the US and Uganda,” according to the post. 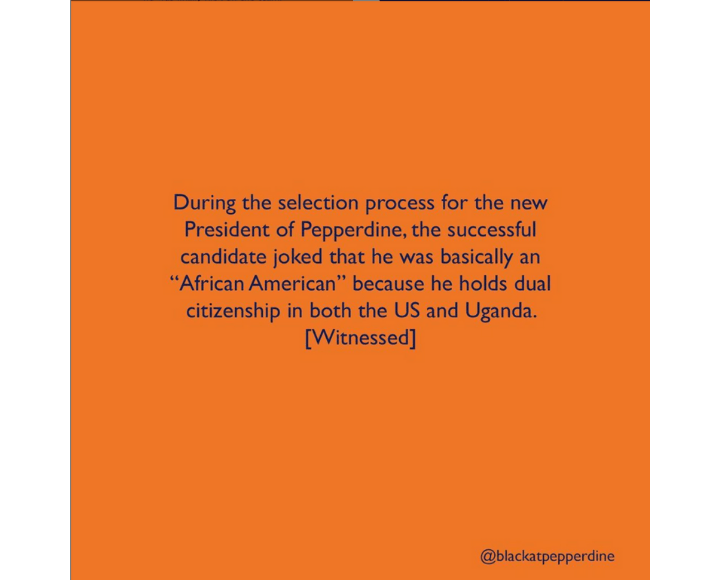 Meanwhile, President Gash continued to post on his personal account, chronicling the growth of his avocado plant during his first year as president. In response, community members shared frustrations due to a lack of response from Gash and the administration.

Student Kristopher Gordon commented on Gash’s recent Instagram post, writing, “Instead of focusing on an avocado plant’s growth, you should instead read @blackatpepperdine’s posts, make systemic changes within the school and come back a year later to see if you have helped. Specifically, you should read the submission of your repeated ‘signature phrase’ that you refer to yourself as an African-American because of your work in Uganda. Shame on you.”

Student Monique Hampton also commented on the post. She wrote, “@jim_gash literally just posted celebrating 1 year of being president at @pepperdine…but can’t take the time to acknowledge his discriminatory language and the racism he encourages with his ‘jokes.’ Disgraceful.”

In response to the statement, Gash said, “As I shared at the recent President’s Briefing, the comment I made, repeating a joke by an Ugandan justice, was intended to be a lighthearted play on words about my still-pending potential citizenship in Uganda. I also recognize that intent sometimes doesn’t match impact. I accept full responsibility for not realizing in advance that my attempt at humor might be offensive. If I had, I never would have said it. I am grateful to be a part of a Christian community that extends grace to one another as we continue to grow together.” 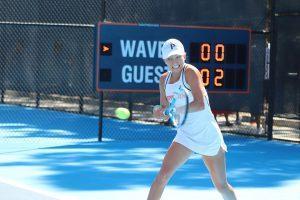