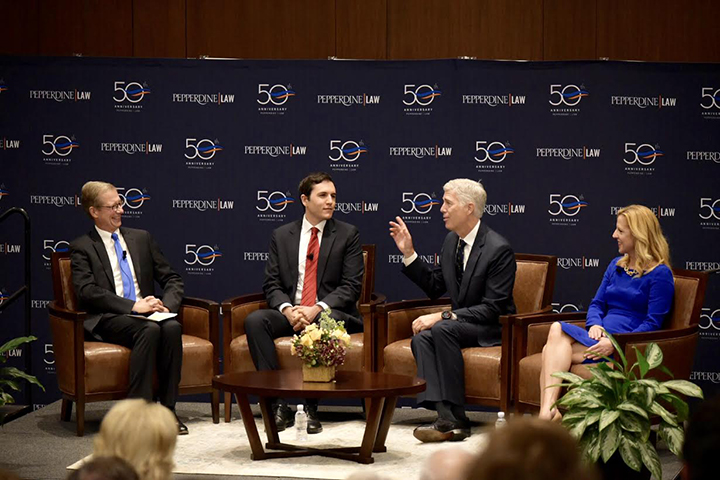 U.S. Supreme Court Justice Neil Gorsuch sat down with Dean of Pepperdine Law Paul Caron on Wednesday afternoon to discuss Gorsuch’s new book, “A Republic, If You Can Keep It.”

Themes in Gorsuch’s book, such as the Constitution, separation of powers and the role of a judge, were talking points during the event at Pepperdine Law on Sept. 11. The justice shared the Caruso Auditorium’s stage with two of his former law clerks, David Feder and Tobi Young. Gorsuch praised the younger Feder for his contributions in helping write the book.

“I love students, and I love spending time with students,” Gorsuch said during the event. “[Students] can do this too. You don’t have to be 65 and gray-haired to write a book.”

The audience was filled with members of the Pepperdine community, including notable figures such as President Jim Gash and former President Andrew K. Benton. Benton, who has taught undergraduate constitutional law for the past 20 years, spoke highly of Gorsuch.

“We placed someone on the Supreme Court who is very humble and real,” Benton said. “He fits well into our community as a person of faith. All I had known about Justice Gorsuch was what I had read, and now I am even more impressed.”

Gorsuch discussed his belief to uphold the Constitution to its original meaning at the time of enactment, known as originalism. The other side of the spectrum would argue for a living Constitution, or the claim that meaning of the Constitution is subject to change.

“I’m not saying the Constitution’s perfect,” Gorsuch said. “The original version had two major defects: it didn’t have equal rights for women or for racial minorities. Nine old judges didn’t fix those problems, ‘We the people’ did.”

Although Seaver senior Chase Manson did not agree with Gorsuch’s stance, Manson said he appreciated hearing a different perspective.

“He talked a lot about originalism versus living constitutionalism,” Manson said. “It was interesting to be in that dialogue, and to then go have the conversations on how to fix our justice system. I really appreciated his thoughts on that.”

First-year law student Uni S. Kim also shared her differences with Gorsuch, but wanted to seize the opportunity to hear a U.S. Supreme Court Justice and be engaged with his views.

“I do not personally agree with Gorsuch’s views and previous rulings,” Kim said. “Despite our political differences, I think it’s really good to be engaged and listening to what the other side has to say. It doesn’t matter if you’re a liberal or republican, we should still respect and uphold the Constitution.”

Former Supreme Court Justice Bryon White was a role model for Gorsuch growing up, Gorsuch said. He shared how White was a man of simplicity, never seeking fame or fortune.

For Seaver senior Jared Lee, the emphasis on modesty stuck with him.

“Justice Gorsuch talked about the incredible humility it takes to be a judge,” Lee said. “A quote I wrote down was, ‘If you do your job correctly, no one should remember you.’ The job [of a justice] is not to be a celebrity, it is to uphold the Constitution and and the law.”

The event concluded with Caron presenting Gorsuch with two tickets to the musical, “Hamilton,” as a thank you for speaking.