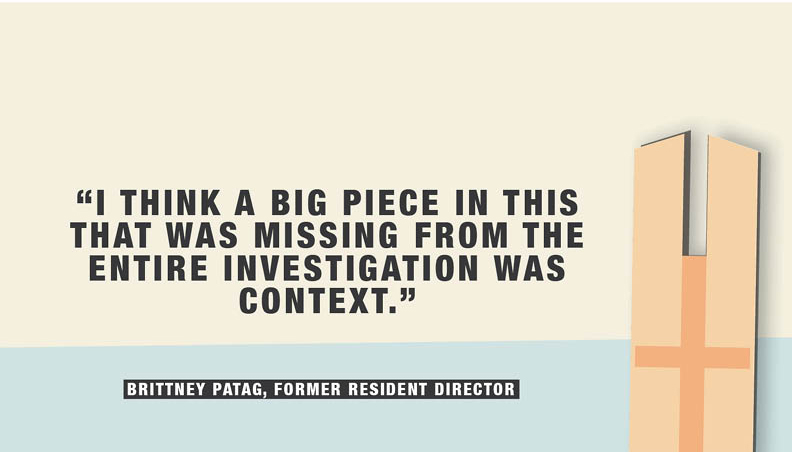 EDITOR’S NOTE: Some names have been changed for anonymity.

Three professional staff members have left Pepperdine as of Jan. 27. This change in Housing and Residence Life personnel was the result of an incident in Morgan Hall that occurred over Christmas break, according to several University staff members who spoke on condition of anonymity.

“Regrettably, there was an incident on campus involving several University staff members. Student Affairs and the Department of Public Safety worked cooperatively to investigate the incident thoroughly and have taken appropriate action,” according to a statement issued by Public Relations on Jan. 31. Farmer, Dean of Student Affairs Mark Davis, and Associate Dean of Students Jon Mathis declined to comment.

Patag filed a grievance against the University on March 3, 2017, alleging “several discrepancies with how the investigation was handled,” according to the grievance. Pepperdine has since issued Patag a check for five months of back pay and changed her resignation date to May 15, 2017, Patag wrote in an email.

On Dec. 16, after an evening get-together at Harri’s on-campus apartment, six staff members and Patag’s husband, went into Morgan Hall and spray-painted on its walls, according to University staff member Kate Wilson (name changed), who said the group also “discharged a fire extinguisher and ran from the ensuing fire alarm.” Patag herself attended the get-together but did not follow the group to Morgan Hall, she wrote in an email.

“Morgan was about to be demolished after fall semester close-down, and the incident occurred after students had left campus for Christmas break,” Wilson said. “The idea to go spray-paint originated at a staff Christmas party that evening on 12/16, as result of seeing posted Facebook and Snapchat photos of Morgan residents also spray-painting random messages on the walls as they left for break.”

After the alarm sounded, DPS officers arrived and began an investigation. Harri had left the scene after spray-painting a smiley face and was not present when the fire alarm went off, according to several University staff members who wished to remain anonymous. At this time, it is unclear what messages were spray-painted on the wall.

“I think a big piece in this that was missing from the entire investigation was context,” Patag wrote. “The context missing from the investigation is that everyone was operating under the belief that Morgan was being destroyed to the ground by a wrecking ball on Monday morning. Professional staff didn’t believe anyone would see anything that was written. Students had left for break, there were no residents in the house, and that provided a larger sense of freedom for professional staff in terms of the content of what was spray-painted.”

The walls of the dorm were already painted by students who had received approval from Department of Facility Services and RDs as long as the paintings were “reflective of Pepperdine and existing community living standards,” Director of Facilities Services Carly Mischke wrote in an email. She also wrote that spray-paint was not allowed by students.

“If the finished product was found to be in bad taste or offensive in any way it would be painted over,” Mischke wrote.

Patag wrote that the rule against spraypaint was not made clear to HRL before the incident.

As Morgan Hall was not roped off or closed up in any way, Patag said staff members did not break in.

“There was no malicious intent in anyone that night, of this I am fully confident,” Patag wrote. “It’s such a shame — understatement of the year — that it turned out how it did. … Resident Directors are the front line of keeping the students abiding by the rules of the university. I truly believe no one would have gone to Morgan for one second if anyone thought that there would be repercussions.”

Patag wrote that she did not set foot in Morgan that night. She said she went home after the get-together because she did not feel well. As the RD on duty, however, Patag was responsible for responding to the DPS emergency call.

“I received the duty call that night, and was told by DPS that Los Angeles Police Department was en route, and vandalism had occurred down at Morgan,” Patag wrote. “Because I knew that students had also been spray-painting in Morgan during move-out week, I was unsure of how to correctly respond, knowing that professional staff had also been down there.”

Patag wrote that she texted her immediate supervisor, Farmer, right away and told him all of the details she knew and “asked for advice on what to do.”

“I neglected to tell DPS that RDs had been involved, but did tell DPS that the Department of Facilities had given approval for students to paint on the walls — which was true,” Patag wrote. “At the time of the DPS call, I was unsure of the content that had been spray-painted on the Morgan walls, and did not know that staff had run from the alarm.”

Patag wrote that as a result of the DPS investigation, she was accused of a cover-up with supervisor Brandon Farmer and “accused of lying/diverting DPS from the truth.” Patag wrote that she was officially asked to resign because she “did not tell DPS about the fire extinguisher being discharged (a fire safety issue) and because I was being held responsible for my spouse’s actions that night.”

According to Patag, the individual who tampered with and discharged the fire extinguisher was not asked to resign.

The Office of Public Relations confirmed that the fire alarm was activated and alerted DPS to the incident which the University later learned “involved several University staff members.”

In response to the firings, University Public Relations released the following statement:

“Upon discovering that staff members were involved, Student Affairs requested that an independent investigation be conducted by DPS. The investigation findings were then shared with the department heads of involved staff members. Those departments, in accordance with procedures outlined in the University Policy Manual, then determined the appropriate disciplinary action for each employee.”

“That is a great question, and one that has continued to cause confusion and deep pain because we still don’t know the answer,” Patag wrote. “The four of us who were forced to resign were not told any details beyond our individual charges.”

Between the incident on Dec. 16 and being asked to resign on Jan. 27, the involved staff members waited six weeks to hear the University’s decision.

During this time, Patag did not speak with a representative in Human Resources and was not told what charges were mounted against her, according to her grievance.

Coefield expressed his sentiments about leaving his position.

“I think what’s important for folks to know is how leaving any institution that you’ve cared about and loved for a while is difficult,” Coefield said. “I’m deeply appreciative of the Pepperdine community, and I think one of the huge privileges of my position was being able to work with great students whom I loved dearly, and work with great staff and wonderful faculty.”

Coefield said he will always be thankful for his students, and for now, he is “still trying to process.”

Assistant Director of the Pepperdine Volunteer Center Justin Schneider, who said he is close friends with Coefield, offered his perspective on the incident. Schneider said any time a person is let go, many factors need to be weighed, such as the cost of hiring and training new employees.

“You also have to ask, ‘What’s going to be the cost of staff who remain?’” Schneider said. “They now have increased workloads and increased burdens. In a place like Pepperdine, then you ask, ‘What’s the cost to the overall community, including the students?’ … You ask, ‘Is this offense something that causes them to be a threat to campus?’”

The six remaining Resident Directors will continue to fill in the gaps left by Harri and Patag for the remainder of the semester. A student in Patag’s staff group said many students are feeling “left in the dust” as a result of the staff resignations.

“I think that just a lot of us are very sort of questioning HRL as a whole, especially since [Patag] was just a great, great human being,” the student said. ” I think we’re all really frustrated. We want her to come back and be back. We obviously want to carry out our jobs, and the reason we signed up was not for higher administration but for the freshmen, but a lot of us are just feeling a little, I don’t know. We still want to carry on our jobs, but it’s hard to have a heart for it at the moment.”

Schneider said the thing that concerns him most is “the community that remains.”

“I think about the students that Brittney [Patag], Michael [Harri] and Bryce [Coefield] worked with,” Schneider said. “I see them as students who oftentimes struggle the most to ‘fit in’ at Pepperdine. I think of them losing these significant advocates and that’s what makes me sad. I’m also sad for staff members who remain and continue to work with students who are unsure who to trust.”

Schneider added in an email, “Lastly, I pray for those who made the decision. They have the University’s best interests in mind whether I agree or not, and they made a very difficult decision that was not made lightly.”

Update made on Nov. 30 at 3:20 PM: Brittney Patag filed a grievance with the university after her resignation and was granted back pay and a change of resignation date. The individual who discharged the fire extinguisher was not asked to resign. Patag claims that the rule against using spraypaint was not made clear to HRL before the incident.

Update made on Mar. 18 at 10:47 AM: Brandon Farmer will be leaving Pepperdine at the end of spring semester on his own volition.

Update made on Mar. 16 at 9:29 PM: At this time, it is unclear what messages were spray-painted in Morgan Hall.