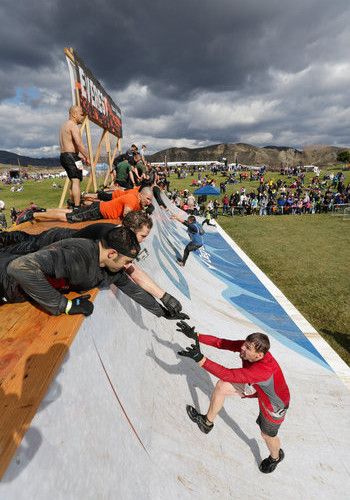 A member of the California National Guard, Bill “Big Sarge” Hansen was injured while serving a tour in Iraq in February of 2009. An accident involving an IED explosion caused him to suffer three cracked bones in his neck, herniated disks in his back, a traumatic brain injury and further injuries to his knee and shoulder.

“I was pretty messed up for a little bit,” said Hansen, who needed to take pain medications and said he began losing himself to them. “It slowed down my life. I blew up to about 360 pounds. Before I had been hurt I had been getting ready to fight MMA again and was competitively body building … the doctors said that [the muscle conditioning] was what saved my life. It kept my neck in place.”

“I was like, ‘Whoa, I’m really out of shape,’” said Hansen, who resolved to push himself to get back in good health and return to normalcy. Hansen heard about the Tough Mudder event from a fellow member of Wounded Warrior, and he knew that the event was the challenge he needed.

“I YouTube’d it and thought, ‘Wow, that looks crazy. Let’s do it!’” said Hansen, who went on to train for his first Tough Mudder event.

“The average time it takes someone to do a Tough Mudder is four hours,” said Hansen, who had to walk through his first event. “It took me seven and a half hours. But I didn’t care. I was going to finish it. For me, it was not the speed, but the destination. I was going to get to the other side.”

Hansen has continued to rehabilitate himself and has gone on to help train and lead his own team of fellow Wounded Warriors in the nation-wide event. Tough Mudder has shown strong support for Wounded Warrior, raising more than $6.5 million for the organization to date. 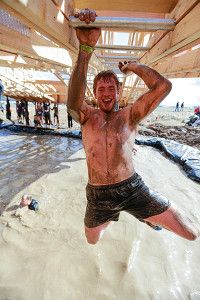 So what exactly is a Tough Mudder?

Simply put, it is a hardcore, 10-plus mile military style obstacle course designed to test all-around strength, stamina and mental grit. OK, maybe it’s not that simple, but what truly differentiates the event from others is the strong focus on camaraderie.

“People help each other up, push each other through obstacles and in general will wait for others in the crowd to offer help and assistance with the various challenges,” said Sean Corvelle, the start line emcee for Tough Mudder. Corvelle’s role is to motivate and energize competitors throughout the event, whether it is through words of encouragement through the megaphone or with tips and strategies for the various obstacles. “It is not a race. It is a challenge … it’s a self challenge and a test of will … everything you’ve done in your life up to this point is challenged on this course,” Corvelle said. He describes the atmosphere as a social event, one in which people come together to support one another in achieving a physical and mental goal.

“You can start the event alone, but you are going to finish as a team,” said Ben Johnson, a representative of Tough Mudder. Johnson said the upcoming event in Los Angeles, the first North American event of 2014, will feature new and unique challenges never before seen in Tough Mudder history.

“We always have our staple obstacles at our events: arctic enema, everest, funky monkey. This year, LA will be having new obstacles on site … we have put a lot of time over this past year in designing some new stuff and LA is going to be the first market to actually see these things come to life and it’s really exciting,” Johnson said. 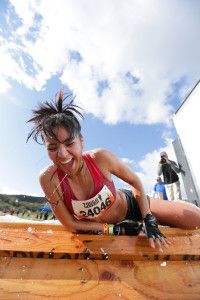 The LA event will take place at the Glen Helen Raceway in San Bernardino on March 29 and 30, and is expected to bring in an estimated 12 to 14 thousand people.

“Anyone that is in moderate shape can make it through the course … you can walk the entire course and be OK, it just won’t necessarily be as exciting,” said Johnson, who recommends first time competitors to try doing some running and some pull-ups and push-ups in anticipation for the event, and to be sure to have the right gear.

Tough Mudder looks to provide all competitors with a great challenge set in a social atmosphere. For more information about the upcoming event and registration and to see some truly gnarly photos and videos from past events, visit www.toughmudder.com.

Editor’s Note: Are you considering attempting the Tough Mudder? Would you be interested in joining a team representing Pepperdine University? Email me at chirag.patel@pepperdine.edu and let’s hit the course together! And as a bonus, here is a code good for 10% off on registration: TMLA53882 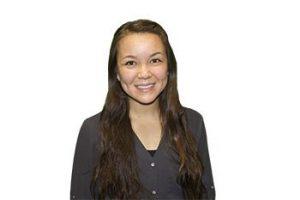 What could have been and why you should have taken advantage of all-you-can-eat-chocolate day   I don’t want to hear...
Copyright 2013 Jupiter Premium Magazine Theme
Back to top