By Alysha Tsuji and Richie Estrella 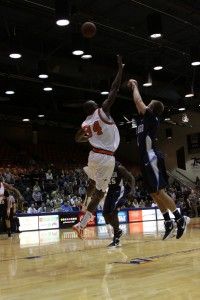 “We played pretty well in the Gonzaga game [on Feb. 4],” senior center Corbin Moore said. “We didn’t execute the game plan as well as we could have [in this game]. We made lots of mental mistakes and minor errors.”

Pepperdine only has three conference games left this season and all of them are at home. They face the dominant BYU Cougars (20-6, 8-3) once again in their next match-up on Saturday, Feb. 11.

“To prepare we are going to watch tape of the last time we played BYU,” Moore said. “Their two power players are their two big men. We are going to have to try to come up with a strategy to minimize their scoring inside.”

Last time the teams met, Brandon Davies and Noah Hartsock ran a clinic in the paint, putting up 29 and 20 points respectively.

In the men’s basketball squad’s loss against the Toreros, the ultimate deciding statistics factor turned out to be the points each team acquired off the bench. San Diego’s bench entered the game strong with 39 points, while Pepperdine’s bench scored 18 points. 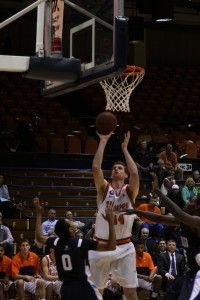 Aside from that, in the first half of play, the Waves fell behind early, as they were not able to handle the consistent scoring from the Toreros.

While San Diego sank 52 percent of its field goals and 44 percent of its three-pointers, Pepperdine faltered, especially from the free throw line, marking down only two of seven attempts.

In the second half, Moore came out with a bang, converting a simple lay-up. Then on the next play, he dove to the floor for a hustle play, which eventually gained him an assist. The quick start brought the Waves to within four, 34-30, but that’s the closest they would get.

For every Pepperdine score, San Diego had an answer, and it resulted in a 70-57 blowout. To add salt to the wound, San Diego’s Cameron Miles threw down a dunk with a little over a minute left.

Men's tennis falls in a close match to No. 1 ranked USC

What were today's most interesting stories? Pussy Riot, bacon milkshakes, and something about Steve Jobs. Graphic Online...
Copyright 2013 Jupiter Premium Magazine Theme
Back to top