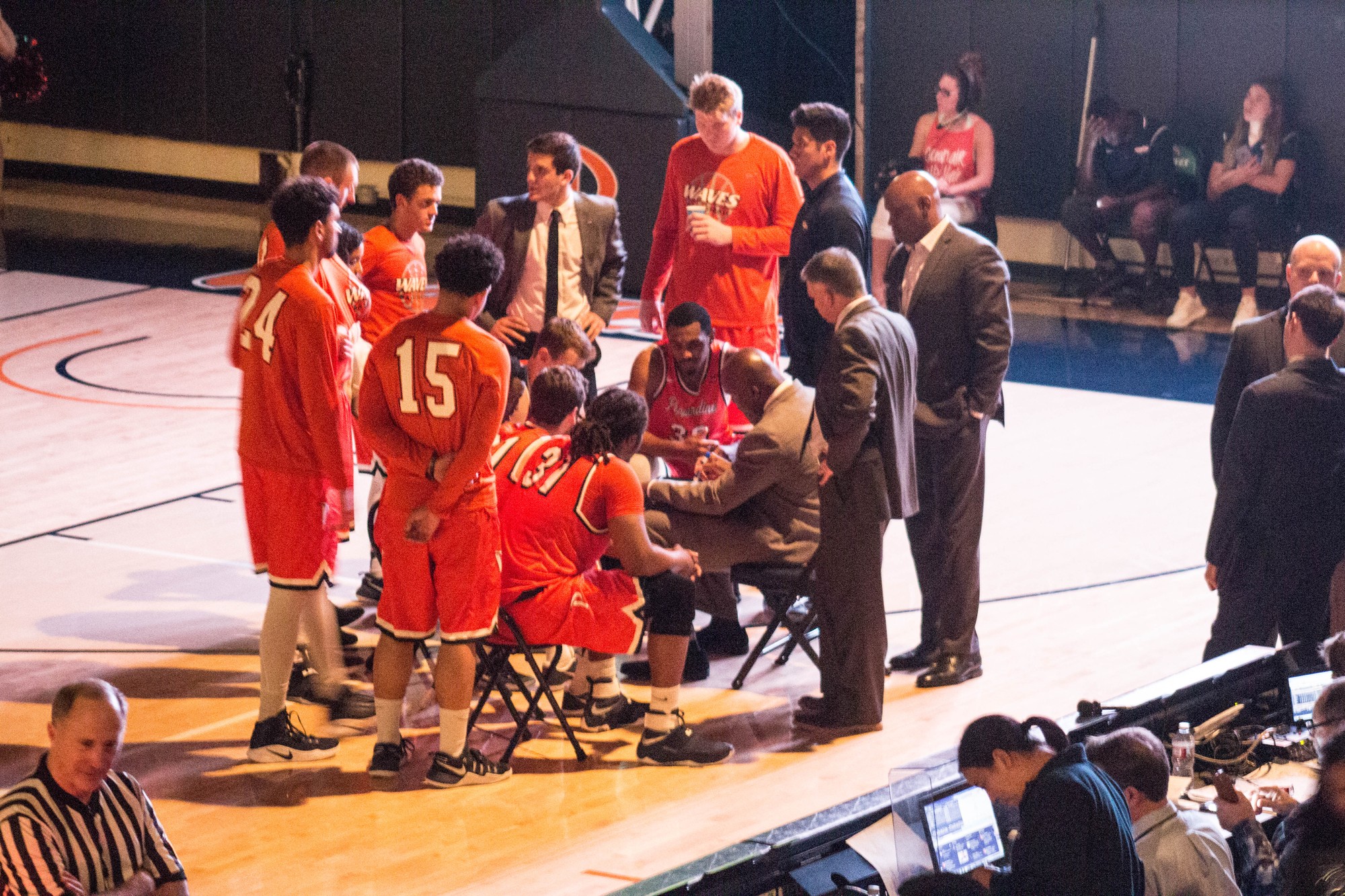 Of the two games last week, Pepperdine’s 29-point loss to Saint Mary’s hurt the most. This isn’t an alt-fact: Getting blown out in your own gym always hurts, especially in a season in which opponents have outscored the Waves by 62 points throughout the course of this 9-21 season.

Somehow, the 29-point loss on the court hurt less than the off-the-court news that broke shortly before tipoff.

Senior Chris Reyes is out for the season from a heel injury he sustained against Santa Clara. The Utah transfer averaged 13.4ppg and 7.9rpg

Pardon the cliché, but the fact that Pepperdine lost one of its starters during a 51-point loss against Santa Clara is an insult to injury.

The senior forward was in the midst of a late-career Renaissance. After only averaging 3.4 points and 3.0 rebounds while playing 12 minutes per game, according to sports-reference.com. Reyes started all 27 games he played in and averaged 33 minutes per game.

Reyes was great at doing the little things on the court, Granted, it is hard to outshine senior guards Jeremy Major and Lamond Murray Jr. in the middle of their record book-torching seasons, but Reyes’ eight double-doubles are a bright spot in an otherwise-forgettable season. In the early months of the season, Reyes cracked the top-ten in the NCAA for field goal percentage; despite a curtailed season, Reyes is still third in the WCC for field goal percentage (53.7 percent), fourth in total rebounds (212), fifth in blocks (38) and ninth in Player Efficiency rating (20.3), according to sports-reference.com.

The last 73 minutes of game-time without Reyes have shown what Pepperdine would have looked like had he not used his fifth year of eligibility in Malibu: Nearly unwatchable. Pepperdine has been out-rebounded by an average of 12.6 rebounds per game, and the Waves have failed to break their average of 69 points per game, according to sports-reference.com. The artist formerly known as the Waves offense has completely stalled; now more than ever, the offense revolves around a Murray Jr. dribble-drive or a shot attempt early in the shot clock (related note: Murray Jr. shot 7-of-19 from the field, yet led the Waves with 17 points).

Simply put, the Gaels put on a clinic. Against a shorthanded, injury-ridden, (insert practically any synonym for depleted here) Pepperdine team, Saint Mary’s was able to do what it does best: Grind out possessions, smartly distribute the ball and effectively use the shot clock.

Even though the Gaels were favored by 18.5 points before the Waves announced Reyes’ season-ending injury, it’s safe to say that if Reyes was playing, this game would have been a little more competitive.

Honoring the Past — Arthur Puu

Oh how time flies by.

Six seniors entered the 2016-17 campaign, but due to injuries throughout the season, only four played in their final regular season game at Firestone Fieldhouse on Saturday afternoon: Jeremy Major, Jonathan Allen, Kevin Hempy and Lamond Murray Jr.

For Chris Reyes and Amadi Udenyi, two seniors hit with the injury bug, their presence on the basketball court was sorely missed by this young and developing Pepperdine squad. Udenyi has been granted a medical redshirt, which will allow him to play next season at Pepperdine, but for Reyes, he has been ruled out for the rest of the season, truely a tough break for a player who has stayed healthy and has been a key star for the Waves all season in his only season with the team.

Jonathan Allen and Kevin Hempy contributed a lot of energy off the bench, but both seniors have had inspiring journeys as both were walk-ons. In his lone season for the Waves, Hempy began the season with garbage time and DNP’s, but as the season went on, he began to log major minutes in the rotation. Over the past three games, he has averaged 19.7 minutes per game with 3.0 rebounds per game. Allen has also played big minutes in the rotation as of late, averaging 21.8 minutes per game with 4.2 rebounds per game. He had arguably his best game of the season against Santa Clara on Feb. 16th with 11 points on 5-of-6 shooting.

And finally, Lamond Murray Jr. and Jeremy Major have been two key players for the Waves over the past four years in Malibu.

Murray wasn’t the top dog early in his Pepperdine career. He came off the bench in his first two seasons, but really blossomed into a star in his junior and senior seasons. This season, he has been the leader for the Waves offensively, leading the team and the WCC with 20.3 points per game. With those numbers, he could become the first player in program history to average at least 20 points a game since Brandon Armstrong in 2001. Murray is also one of nine players in program history to post at least four 30-point games in a career, with three coming this season (a career-high 33 vs. Weber State, 32 vs. Santa Clara, 30 vs. BYU and 31 vs. USF). He was also the first Wave since Armstrong in 2001 to earn back-to-back WCC Player of the Week awards in early February 2017.

Major has reached many big milestones this season: becoming the Waves’ all-time assist leader and the first player in program history to record four seasons with at least 100 assists. He is also on pace to set the program record for most career starts on Saturday against San Francisco, which would be his 122nd career start (he’s currently tied with Levy Middlebrooks). Major became the program’s all-time leader in assists back on January 19 at BYU, breaking Mark Wilson’s record of 450 set 33 seasons ago. He also climbed the career record books in other categories, such as top five in steals, three-pointers made and games started this season.

Each senior will surely be missed for their contributions to the men’s basketball program and to the Pepperdine community.

This wasn’t a particularly fun game to watch. Getting throttled in front of your home crowd (all 12 students in the stands) is more than a little embarrassing.

Or was it? Maybe it’s the dark, dark cynic in me that’s a result of watching years and years of nearly all my favorite teams fold under pressure (or just leave; pour one out for the Sonics), but my expectations were fairly non-existent. Yeah, we beat BYU, but they’re not even close to that top tier that SMC and Gonzaga occupy. I mean, Pepperdine just lost to sub-.500 LMU by over twenty points; what did you think would happen against the 20th best team in the nation?

So, yeah, I wasn’t overly surprised by the loss. In fact, considering rebounding machine Chris Reyes was hurt (along with Amadi Udenyi and Kam Edwards, who’ve been MIA all year), this certainly wasn’t as bad as it could’ve been.

Knox Hellums continues to show potential as a three-point threat. Lamond Murray Jr., as always, had a solid performance. And although freshman Nolan Taylor shot 0-9, he showed flashes of a paint-enforcer, nabbing six rebounds.

Yes, that game was not overly fun. But remember, it can always be worse.

MBK | Hey, who turned off the lights? Power outage in Pepperdine has us on a delay. pic.twitter.com/gfuTR1uBNk

Does Pepperdine need a new gym? My column:

A Pepperdine athletic department official tells me power surges happening throughout campus. Lights are back on. Game vs St Mary’s to resume

Yeahhhh sorry about that guys. Our bad. https://t.co/2jL23U9Ctk

With five seniors graduating upon the conclusion of the 2016-17 season, there are a lot of questions that will have to be answered by Head Coach Marty Wilson and his coaching staff for the upcoming season. Among all the pressing questions, the biggest one will be figuring out which players will replace Major, Murray Jr. and Reyes.

Freshman guard Elijah Lee has shown flashes of his full potential over the second half of the season, posting back-to-back double digit performances early in February (10 vs. Pacific, 16 vs. BYU). Entering Saturday, he ranks 12th in the WCC in assists (2.7) and ninth in steals (1.1).

Freshman forward Nolan Taylor has shown a lot of growth over the span of the season. Despite missing the first seven games of the season, he became the Wave’ fourth-leading scorer in WCC play at 7.1 points per game while scoring in double-figures in five straight games against BYU, San Diego, Santa Clara, LMU and USF (15, 10, 14, 17 and 20 respectively).

Fellow freshmen Craig LeCesne and Knox Hellums have both been key staples of the Pepperdine bench all season. Hellums, known to be a three-point specialist and capable shooter, scored a career-high 19 back in November against Portland State and later posted 15 against Pacific on Feb. 4.

LeCesne has been the heart and hustle of the Waves team off the bench, and while those stats don’t show in the box score, his presence has been felt in the game. He started the season on fire, notching his first career double-double with a 10 point, 11 rebound effort against Life Pacific back in November, but cooled off towards the end of the season, averaging 6.9 minutes per game with two DNPs due to illnesses. He did, however, rack 10 minutes of playing time against Saint Mary’s, going 2-for-3 from the field for 6 points and 3 rebounds.

The future, however, does look bright. The team still has many talented players such as forwards Nolan Taylor, Kameron Edwards and Craig LeCesne; guards Knox Hellums and Elijah Lee; as well as incoming freshmen Trae Berhow, Colbey Ross and Jade’ Smith. Add that with the return of Amadi Udenyi, a fully healthy Kaijae Yee-Stephens and an eligible Eric Cooper Jr., the team looks primed for success next season.

A Parting Note from the Three-Man Weave Staff — Kyle Cajero

Chalk it up to injury luck, poor timing, no defense or the myriad other reasons why Men’s Basketball had a down year, but this season was difficult to watch. Jackson, Arthur and I wanted to take the on-the-court difficulties and turn them into highlights with the “Three-Man Weave” series. We found the silver linings. On behalf of Jackson and Arthur, I hope we succeeded in making an enjoyable and informative sports column.

Thank you, dear reader, for reading these columns throughout what can only be referred to as a disappointing season. As easy as it is to criticize or completely abandon Pepperdine basketball, we appreciate the handful of parents, friends and strangers who stumbled upon these “Three-Man Weave” columns and gave us a bit of your time.

Lastly, these articles could not have existed without an important behind the scenes trio: Copy Chief Samantha Gonzales, Managing Editor Rachel Ettlinger and Producer Jennevieve Fong.

The Graphic would also like to extend its gratitude to Assistant Athletic Director of Communications Roger Horne for his patience, support and willingness to help us cover Men’s Basketball.