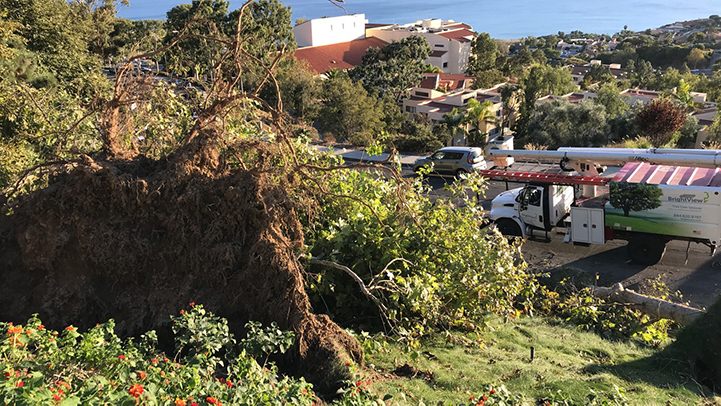 Falling trees, allergy flare-ups, fire risks and hotter temperatures are on their way, and the Santa Ana winds are to blame.

Santa Ana season starts in early autumn and stretches through the entire winter in Southern California. During this time, strong and warm winds blow through coastal regions due to the pressure, topography and temperature of the area.

“Wind is the horizontal movement of air mass,” Gerard Fasel, assistant professor of physics, said. “In this case, that mass is moving to the relative low pressure at the coast.”

Fasel explained that winds move from high to low pressure areas, which is why the Santa Ana’s affect coastal regions the most.

“Think of rolling a marble down a hill,” Fasel said. “The greater the distance between the high point and low point, the faster the marble will move down. Likewise, the higher the high pressure area and the lower the low pressure area, the faster the air mass will slide down. That’s why we get those huge winds.”

As winds pick up, traveling to low pressure areas, they accelerate even faster by channeling through narrow canyons. The air mass picks up speed when it is forced into a smaller space, Fasel said.

The faster the wind moves, the hotter it gets, which explains why the wind is very fast and very warm during Santa Ana season.

“Temperature has to do with how fast things move,” Fasel said. “As the air particles move faster and faster, the temperature increases. That’s what we see happening when the wind picks up speed as it comes through the canyons.”

This hot, moving air makes this season especially conducive to fires, and for many people living in Southern California, Santa Ana season is fire season.

“During the Santa Ana season, we get a lot of fires,” Fasel said. “That’s because of the really dry conditions and the increased motion of air particles due to high wind speeds.”

The Thomas Fire in 2017 in Northern California and the Woolsey Fire this past November in Malibu were both fueled in part by the Santa Ana winds. Experts agree that many people associate the winds with traumatic events like these, and the winds are a time of anxiety and stress.

“I have friends that, when the wind starts, start to worry,” Fasel said. “People realize that when we have the winds, there’s probably going to be a fire, and we know how devastating fires can be.”

Fasel said he does not feel this way during the Santa Ana season. In fact, he looks forward to the winds.

“I love the winds,” Fasel said. “I find them really relaxing. I love sitting outside at night or hearing the winds as I’m going to bed.”

A tree was uprooted this past October during the Santa Ana season. Photo by Milan Loiacono.

Fire danger isn’t the only thing on people’s minds when the wind comes. For some, it is a season of sneezing, sniffling and other allergy symptoms.

The San Diego Union-Tribune reported that a year-round warm climate creates a diversity of allergens, which could create problems for residents who are sensitive.

“Even though San Diego has ideal, year-round weather, the downside,” said Dr. Bryn Salt, an allergist at Sharp Rees-Stealy Medical Group, is that … nothing dies,” the article said.

The Santa Ana winds contribute to these symptoms by blowing in more pollen from inland.

Another way students can prepare for the winds is by understanding Pepperdine’s safety protocols for severe wind conditions. 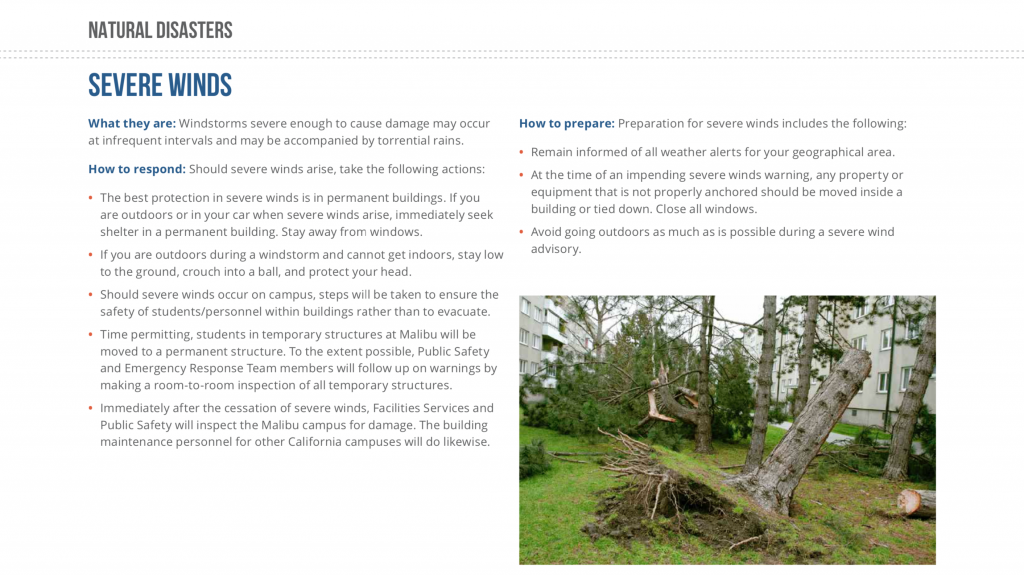 In the Emergency Preparedness Guide, the Department of Public Safety advises students to monitor weather alerts and, in cases of severe winds, avoid going outside as much as possible, staying inside permanent structures.

Power lines, trees and street lights are all potential victims of severe wind storms. Even a parked car could be at risk.

@pepperdine is trying to get power back on after a campus-wide outage began around noon. Three trees fell on Seaver Drive near the Center for Communication and Business building. pic.twitter.com/7QnYPzWcBP

The Emergency Preparedness Guide instructs students, in the case of a power outage, to move to a well lit area and notify DPS.