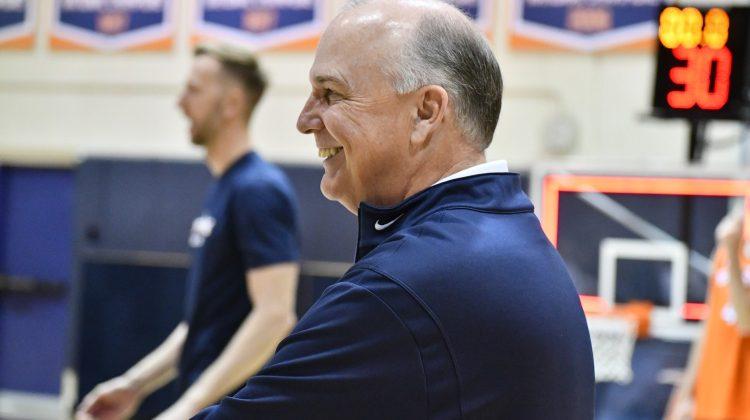 Pepperdine Athletic Director Steve Potts smiles in Firestone Fieldhouse in fall 2019 as Men’s Volleyball Associate Head Coach Paul Carroll stands in the background. Since his arrival in 2011, Potts said he prioritized a three-pronged approach to his hires – Christian values, academic excellence and competing for championships – in that order. Photo courtesy of Morgan Davenport

Steve Potts is in his 12th year as athletic director at Pepperdine, and said the most important part of his job is hiring people.

When searching for a new coach or staff member in the athletic department, Potts focuses on three aspects of the Pepperdine Athletics mission: Christian values, the academic well-being of student athletes and competing for championships — in that order.

“It’s important to me that I hire people that fit that mission — and every person that I talk to, I start out with those three things,” Potts said. “I don’t say, ‘What faith are you? Tell me about your Christian commitment.’”

Potts grew up in the Churches of Christ in Nashville and attended Pepperdine’s Caruso School of Law, where he later taught for 17 years and served as an associate dean of Administration for a decade. He then spent 11 years as Athletic Director at Lipscomb University — another Church of Christ institution.

Despite his strong faith background, Potts does not require Athletics applicants to be members of a Church of Christ, or any Christian faith community.

Pepperdine Athletics does not require tangible proof of belonging to a faith community — such as a letter of recommendation from a pastor — in its hiring process, but Potts said he does call references to ask whether an applicant would fit Pepperdine’s mission.

The Hiring Process for Head Coaches

Athletic Director Wayne Wright hired Ward in 1998, Wright’s final year in the position. Wright did not question Ward about his faith, but then-President David Davenport and then-Vice President Andrew K. Benton asked about it.

“When I got here, I would have called myself a Christian, but probably like a non-practicing one,” Ward said.

Ward was baptized as a non-denominational Christian three years after he began coaching the Waves.

Monobe, who got the job in 2020, is a baptized Catholic but said it had been a while since she belonged to a parish community.

Both Ward and Monobe earned the Athletic Department’s approval in interviews before meeting the University president.

When Potts and the senior administration of the Athletic department decide on their final candidate for a head coaching position, they bring the candidate to the president for a final interview. Both former president Andrew K. Benton and current president Jim Gash have preferred this method — vetting the final candidate — Potts said.

Though Potts does not require a demonstration of faith when candidates apply for a coaching position, he said he expects applicants to demonstrate a commitment to Christian values if they reach the interview stage of the process.

That includes finding purpose, serving others, leading by example, building a diverse community of fellowship and fostering a sense of belonging, according to the department’s mission.

“I ask those interviewing, ‘Tell me how you integrate your faith into your coaching,’” Potts said.

There is no one correct answer to that question, Potts said — some coaches choose to pray with their student-athletes, while others may direct them to a different source in the department for spiritual guidance. For example, Ward prays with his team after every match and before some practices, while Monobe invites her “spiritual leaders on the team” to lead prayers before team meetings.

Monobe’s interview process took place via Zoom in 2020, and she said she was prepared to answer questions about faith. She said Potts made her aware of the faith aspect of the interview.

“I was so grounded in what my values were as a coach, and I knew that it didn’t steer very far from [Pepperdine’s] mission,” Monobe said.

Monobe said she was not worried about meeting Pepperdine’s mission, as she was a part of a powerhouse championship culture at UC Berkeley as a swimmer and at UC Santa Barbara as a coach. She believed her team values, including integrity, humility and respect, align with Christian values.

“I knew that [my faith] wasn’t going to be the end-all, be-all,” Monobe said.

In his time as athletic director, Potts said some hires “haven’t worked” despite their professed commitment to Christian values. He has also turned away candidates due to a lack of faith.

“The least successful hire I ever made at Pepperdine — and it wasn’t in Athletics — was a person who was the most qualified for any position I’ve ever hired,” Potts said. “They were a superstar in their field. But they didn’t fit Pepperdine.”

While Ward said he is now confident and open in his faith after 23 years as a head coach, Monobe said she is at a different stage.

“I still don’t know what direction I entirely want to go, but I do welcome it and I feel like this has definitely reminded me how important [faith] can be, especially in trying times,” Monobe said.

The head coach has the responsibility to interview and choose assistant coaches for their staff, though the department approves their selections, Ward said. The University does not vet candidates for assistant coaching and other non-senior administration staff positions, Potts said.

Monobe said she chose assistant coaches who aligned with her cultural values and coaching philosophies, not necessarily her faith.

“I picked people that were going to work with me well — that was the priority,” Monobe said. “I was picking people that I could mold into what I thought was going to be the best fit for our program.”

Ward said his approach is similar.

“I don’t necessarily think that a hire has to be a Christian, but I do believe they have to be someone that loves life and has Christ-like qualities,” Ward said.

Recruiting new student athletes is also a major part of a head coach’s job, Ward said, he speaks to at least one recruit daily and goes on recruiting visits at least ten weekends per year.

Monobe said she explains to prospective student athletes that Pepperdine allows them an opportunity to pursue truth, but it does not force religion upon its students. She uses “community” as a cornerstone of her recruiting pitch.

“It’s not going to take away from anything — it’s going to enhance your experience,” Monobe said. “You can be as involved as you want, or you can just have it there as a presence.”

Ward is also open about the faith aspect of the school and how he makes it a part of his coaching.

“Soccer is simply the vehicle we use — but really, it’s a ministry,” Ward said. “I love to win. Winning is obviously the point, but it is no longer my purpose.”

Though only 57% of Seaver College students identify as Christian, according to fall 2021 Office of Institutional Effectiveness figures, Potts said he is proud of Pepperdine Athletics and Pepperdine University for maintaining their Christian identity.

“I love the fact that we’ve always been so intentional about it,” Potts said. “And I think hiring is one way that we can maintain that intentionality about it.”