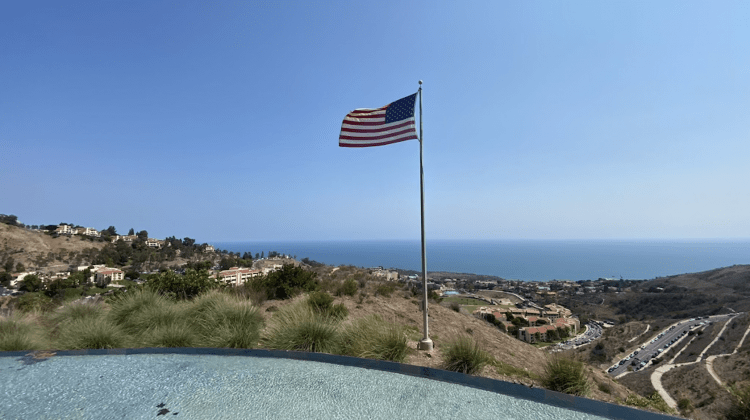 This is the view from Heroes Garden in August 2021. The Malibu campus has been the home of Pepperdine for 50 years. Photo by Anezka Liskova

Pepperdine University is celebrating 50 years of operation on the Malibu campus this year.

George Pepperdine founded the university in South Los Angeles” in 1937, before it expanded to Malibu in 1972.

The move to Malibu has only expanded the opportunity to impact the world, Chancellor Sara Jackson said. Jackson started working at Pepperdine in 1979 as the director of Student Life, said she remembers when she and her father used to ride horses on the property when it was only dirt on the hills. He described to her where every building would be built, speaking about George Pepperdine’s dream, she said.

“George Pepperdine’s dream was to establish a Christian college that equipped young people with an outstanding education and instilled in them Christian values,” Jackson said. “His vision has not wavered. In fact, it has defined the legacy of the school.”

The Integrated Marketing Communication department produced a video telling the story of the Malibu campus, which will first show at Founder’s Day this year.

Michael Gose, professor of Humanities and Teacher Education, learned about Pepperdine in 1958 when his family moved to Buena Park, Calif. He earned his master’s degree in Religion on the L.A. campus and later became a professor in 1980. He experienced both of the campuses and said it was a dramatic change to go from L.A. to Malibu.

“You’ve gone from the most extreme urban situation to the most affluent, rural situation in one full swoop,” Gose said.

“I feel like one of Pepperdine’s strongest selling points is the proximity to the beach, and it definitely was one of my reasons for coming to this school,” Hansen said. “I think if Pepperdine had stayed in L.A. the demographic for the students that would choose to come to Pepperdine would change. I don’t know if myself and many others would have chosen to attend if it wasn’t for the location.”

Over the course of the past 50 years, faculty said they have experienced many memorable moments at the Malibu campus.

“I got to play intramural football and intramural softball [on the L.A. campus], and in those days, they would cover it in the Graphic so I still have the Graphic clippings of me playing football,” Gose said.

While on the Malibu campus, Gose said his favorite memories are teaching softball, starting the Great Books Colloquium and starting the Film major.

“I think the sense of community is strong on Pepperdine’s campus,” Hansen said. “The small school allows you to really get to know many of your classmates.”

The Adamson family beach house was a key to the success of establishing a campus in Malibu, Jackson said. The Jackson family lived there through the 1970s where they hosted families who donated funds to construct buildings on the Malibu campus. These include Blanche Seaver, Leonard Firestone, Beverly Stauffer and Tex and Flora Thorton.

“[They] would come to the Adamson beach house for lunch or dinner, meet the architect of the campus, look at the drawings and hear the vision cast for what this University could become,” Jackson said. “After the meal, guests would get into Jeeps and drive up onto the barren hills of the Malibu property to imagine the future of the campus.”

During President Andrew K. Benton’s presidential term, from 2000-2019, the school ascended to the top 50 nationally ranked schools, Gose said. Pepperdine was one of only three private schools on that list founded after 1900. The other two were Rice and Brandeis University, which “enormous endowments” helped found, Gose said.

“We really have been the little engine that could in our short lifespan [to] move into that top 50, ” Gose said. “My hopes for Pepperdine is to continue to ascend in terms of our motto of purpose and service, and national recognition.”

In the most recent U.S. News and World Report rankings, Pepperdine came in at 55th.

Jackson said he believes it is not only the beauty of Pepperdine’s campus and location that makes the University special, but the people who serve the community and the ideals they all share.

“I believe the world needs more Pepperdine — individuals who are equipped with a world-class education and a heart to serve,” Jackson said.