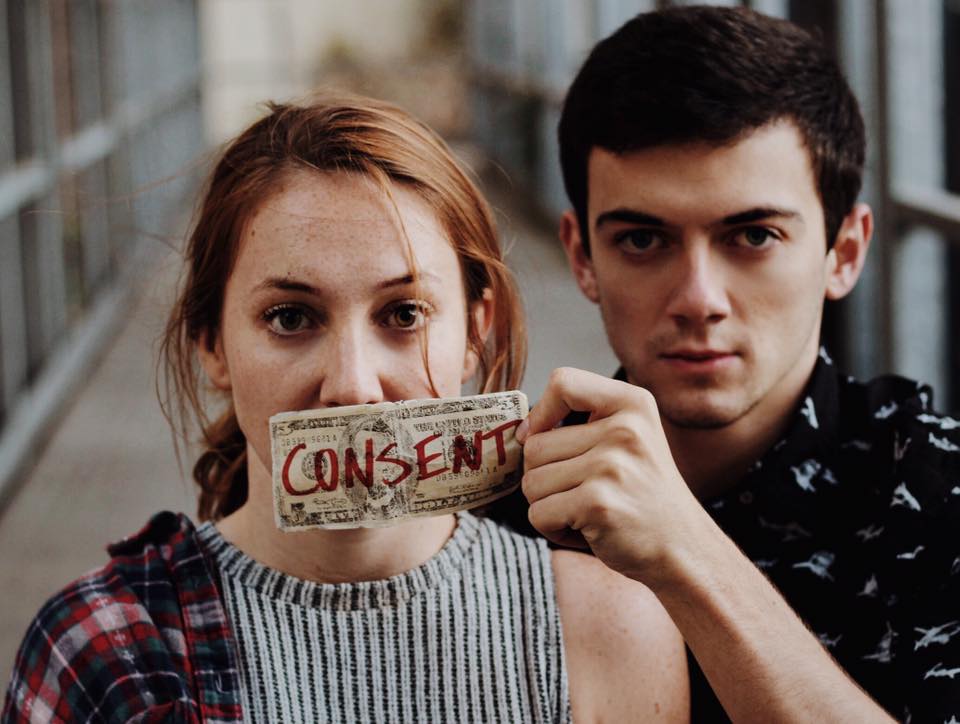 Lynda Radley’s “The Interference” came to Smothers Theatre last week in its first U.S. performance. The play originally debuted in the summer of 2016 in Scotland, where it won the Scotsman Fringe First award and a Broadway Baby Bobby award.

The story surrounds the character of Karen Henshaw, a young woman in college seeking justice after she was sexually assaulted. Different characters side with or against Karen, revealing hard-hitting truths about rape culture and popular responses to college sexual assault cases. The play is set up in an ensemble format, with each character on the stage for the entire duration of the play. It is a typically European form.

Senior Alexandria Garrett, who played Karen Henshaw, said this story is especially relevant to today’s culture and is one that needs to be told. “It’s kind of sickening how needed this show is, because it’s a show that is saying, we live in a rape culture, and what are we going to do to stop it? It’s a show that asks tough questions,” she said. “No matter how hard it is for me to tell a story, that is how badly someone needs to hear it.”

Garrett was part of the original cast in Scotland and has spent more than a year playing the character of Karen. She said the time spent in the story has taught her to actively take a stand against injustice and speak out instead of remaining passive.

“It’s hard at first, but then you can’t help but say something,” she said. “Things as simple as hanging out with someone and them making a comment that is definitely inappropriate. In the past I would have been scared to say anything.”

Junior Sarah Barney, who played the Reporter, said the play is very much a call to arms, bringing attention to a cultural issue. “It’s very much so a challenge to do something about it and to change this rape culture and the kind of stigmas that we’re dealing with,” she said.

The performance came at a timely hour, as April is Sexual Assault Awareness Month. According to the Rape, Abuse and Incest National Network (RAINN), 11.2 percent of undergraduate and graduate students experience some form of sexual violence, and sexual assault is more common in colleges than other crimes.

Junior Brandon Ruiz played Tom, a member of the duo Tom and Jerry, who expresses his doubts of Karen’s allegations on his sports news show. Ruiz hoped the play would dispel some of the myths around sexual assault cases and communicate a truthful story through fictional characters. “The content of the play is very heavy and dark, but I think it’s very real and that people definitely need to hear this if they aren’t aware of it,” he said.

Ruiz said he found the accuracy of the play and the statistics he learned while rehearsing made the story more than a fictional narrative. “When you hear the numbers, when you hear the details of some of these cases and the parallels in a lot of these cases, it makes it very real,” he said. According to Ruiz, Radley’s writing was very thoroughly researched and bore an eerie resemblance to the letter read by the victim of the Stanford sexual assault case in 2016 even before that letter was published.

Garrett said the cast discussed the play with law professors and professionals from the counseling center to immerse themselves in the issues and be able to more accurately depict the aftermath of a sexual assault. She said she hoped that her performance would spark discussions between friends who see the show, and get people to ask difficult but important questions about sexual assault and the world in which we live.

Barney said that although audiences could expect to be put out of their comfort zones, the play ultimately would move the audience to act for change. “Having the opportunity and the platform to spread a message that I feel passionately about, via an art form that I feel very passionately about has been an absolute gift,” she said. She hoped that her performance would inspire support for survivors of sexual assault and for people to take responsibility for our culture.

Each performance of “The Interference” was followed by a talkback conversation between actors, directors and audience members. There will also be performances June 6 through 8 at the Rogue Machine Theatre in Los Angeles.