‘The Board’ Sees Budget Reduction for Student Wellness Advisory Board 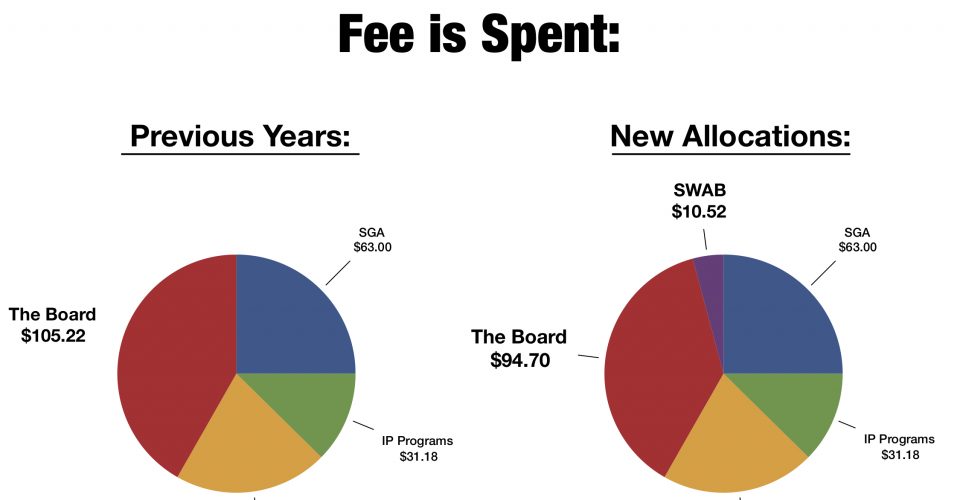 Pepperdine students spend $126 a semester ($252 a year) on a mandatory Campus Life Fee. In recent years, the lump-sum of this fee was divided among Pepperdine’s three student leadership organizations: the Student Government Association (SGA), the Inter-Club Council (ICC), and the Student Programing Board (the Board). This year, a new group is added to the mix.

The Student Wellness Advisory Board (SWAB), an organization dedicated to promoting health and wellness on campus, is now the fourth group on campus that receives a portion of the Campus Life Fee. The Student Programming Board’s budget was reduced by 10% in order to allow for this adjustment.

The change is a result of a resolution proposed and passed by SGA at the end of this past school year. Brittany Skinner, director of Student Activities, works closely with SGA to help them carry out their goals for the year. Skinner said for the past two years, SGA’s goal was to transform SWAB into an independently funded organization.

“It was great leadership by SGA, caring about student health and really wanting to advocate for students by helping [SWAB] get a chunk of the pie,” Skinner said. 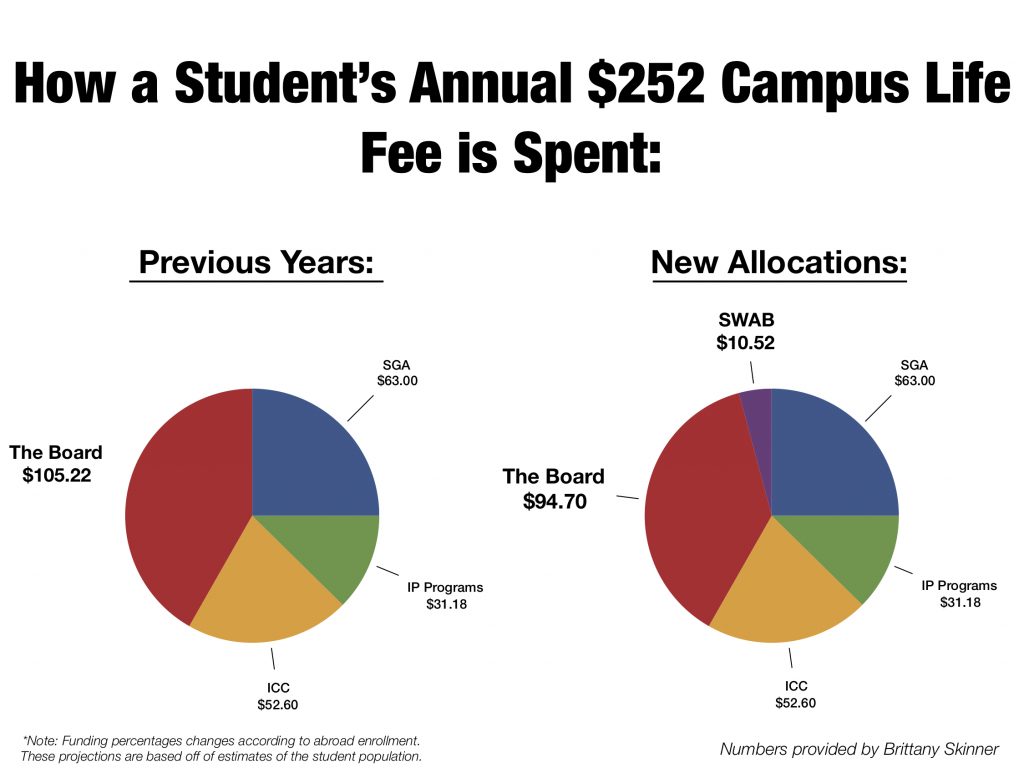 Until two years ago, SWAB got its funding from the Inter-Club Council (ICC), who allocates their funding to approved student organizations. Skinner said before the university could fund SWAB independently from ICC, SWAB first had to undergo a trial period.

“Last year, instead of SWAB having to come to ICC for each event or funding request, [SGA and ICC] were like ‘We support this health initiative, so we’re just going to give you a lump sum from part of our funding,’” Skinner said.

“We called it a ‘pilot year,’ this past year, in order to develop SWAB as one of the one of the now four organizations that would receive funding,” Skinner said. “Before you make a major change like adding another group receiving funding, we have to make sure they’re planning great events, that they have a good structure.”

After SWAB’s pilot year went well, Skinner said the next major decision was to decide how they would provide funding for the group.

“Doug Hurley, the associate dean of students, and myself made the decisions on what the allocations were going to be for this year,” Skinner said. “We looked at the resolution that SGA put forth, and their suggestion as 10% for SWAB. We talked to SWAB about where they would feel comfortable, and they felt like 10% was a good amount of resources for them.” 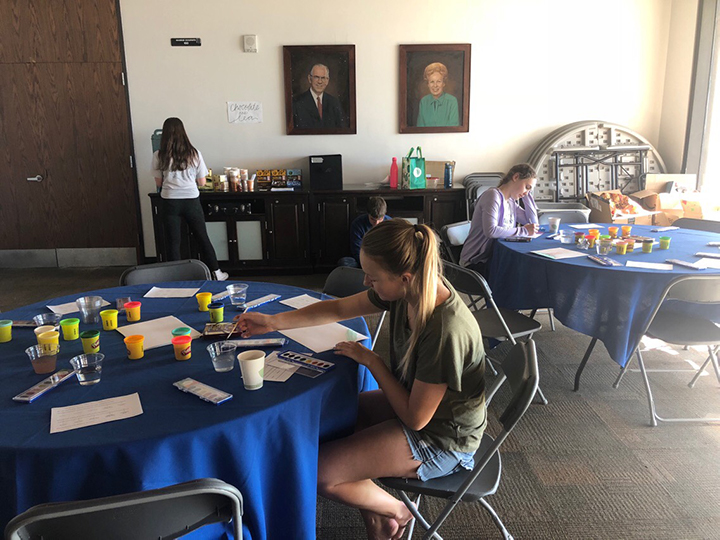 Skinner said the decision to take this 10% from the Board was in view of the fact that the Board’s events overlapped with some of SWAB’s planned events.

“The Board had the biggest budget to start with, and SWAB does programming as well,” Skinner said. “So we’re adding more programming, and we don’t want to program Board events at the same time as SWAB events. So it makes sense to have the Board doing a couple less events a year.”

Senior Annelise Adrian, an event planner for the Board, said this year’s decision-making process has been difficult for the Board.

The main conflict for the Board, Adrian said, is that they don’t want to exclude certain groups on campus by cutting the events that appeal to them.

“Do we like Reel Stories? Do we like Pacific Sounds? These are huge events that different groups on campus love, but they draw different crowds,” Adrian said. “We’re trying to serve the entire student population, so you don’t want to take away from an entire group of people that loves film or loves music. We don’t want to take away the smaller events on the weekends that help freshmen get involved on campus, either.” 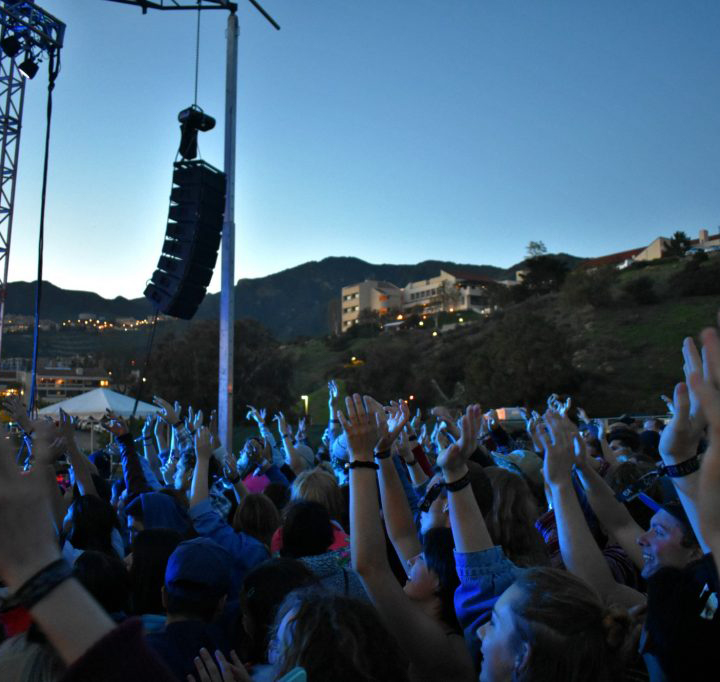 Stacey Lee, an adviser for SWAB, said the main goal for SWAB this year is to get on the student body’s radar.

“We’re receiving a small portion of the Campus Life Fee,” Lee said, “Our hope is that students will really know what SWAB is what SWAB does. I think we can offer a lot of amazing resources and create conversations about what it means to be healthy.”

Most Pepperdine students know very little about how their $252-a-year Campus Life Fee is spent. In four years at Pepperdine, a student will spend $1,008 on this fee, enough to buy a new iPhone X. In the future, Brittany Skinner said the administration hopes students become more involved with how this fee is spent by speaking out to their student leadership.

“Ultimately, this was more of a decision from our team, that we got from what we know about these groups,” Skinner said. “This is something in the future that I hope to have even stronger student feedback on.” 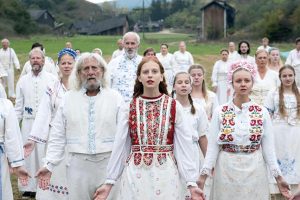