Taggart returns for ‘The Beacon’

“The Beacon,” making its return on Oct. 13 in Elkins, is a mockumentary based on a school newspaper struggling to keep its head above water. The administration threatens to cut funding for the upcoming year if they don’t get their act together quickly. The first season ends with the firing of editor-in-chief, Henry Taggart. Season two, which will premiere this semester, commences right where season one ended, with the firing of Taggart. Jaime Olaez has come back from abroad and has made the choice to take over as the editor-in-chief and rescue the paper from its demise.

“The Beacon” was a simple idea turned into reality by creator, junior Ben Holcomb. It began in March 2011 when Holcomb and a few friends began discussing the possibility of starting and producing a running narrative show on campus. After pitching the idea to adviser Susan Salas, the hopeful Holcomb was granted permission to create a pilot within the course of the semester. Three episodes were done by the end of fall 2011. 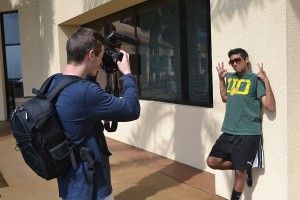 During the summer, they wrote all 6 episodes that will make up season two. Each episode usually runs around 30 pages, meaning that the three writers had to create 180 pages of material in a matter of months.

Comerford explained the arduous writing process of this summer. “We have a fairly collaborative writing process but maybe not as much as we would like,” she said. The three writers wrote the episodes all at once, and since they live in three different states, it was a challenge. They decided the best way to discuss their ideas was to conference call for one to two hours and figure out the plotlines for the season.

Once the school year began, casting took first priority. Holcomb, along with his producers, Olaez, Taylor Heinrich and Josh Alexander, began looking for students to fill the new roles. Olaez explained that the turn-out for auditions was very high this year. They were specifically looking for six to seven roles this semester, and they had close to 35 attend casting. They ended up keeping seven and using the rest of the individuals for featured extras.

“The Beacon” is always in search of extras and tech positions, according to Comerford. It is a great opportunity to get involved with sound, production assistance or even makeup and hair.

“We’re adamant that ‘The Beacon’ is the best place on campus to learn about the business of filmmaking, as we’ve made it our goal to show everyone on our staff how to operate the cameras (Canon 5D Mark II), manipulate footage in professional NLE and compositing programs and understand the little things that go into making a show,” Holcomb said.

The three writers agree that the show has been a wonderful opportunity. It has helped them to appreciate and fully comprehend the work that goes into filming and producing television shows.

“Working on the Beacon, helping with shoots and writing the season with Ben and Isabella has really broadened my view on what it is like to work in the industry,” Olaez said.

It allows them to dip their toes into their future career choice, and let them gauge whether or not this could be something they pursue after graduation.

Filming and editing for the second season of “The Beacon” is currently in progress and the first episode is expected to make its debut during Waves Weekend.

The premiere is in Elkins on Oct. 13 and tentatively scheduled for 12:30 p.m. All who are involved with “The Beacon” suggest that students bring their parents along so they are able to support the Pepperdine community.

The cast and crew see this event as a rewarding experience. “It’s a huge collaborative effort just to make one episode, and it’ll be nice to reward everyone’s hard work with a polished finished product on the 13th ,” Holcomb said.

If you are interested in getting involved with the show or watching the previous season, you can visit their newly constructed website at www.beaconsitcom.com. You can also view the show at night on TV32 or at their monthly premieres in Elkins Auditorium.

CoffeeHouse Kickstart: Students relax with coffee and tunes in the Sandbar

CoffeeHouse Kickstart: Students relax with coffee and tunes in the Sandbar

The first CoffeeHouse of this school year was held last Friday night in the Sandbar. It featured Dana Cargioli, Hunter...
Copyright 2013 Jupiter Premium Magazine Theme
Back to top