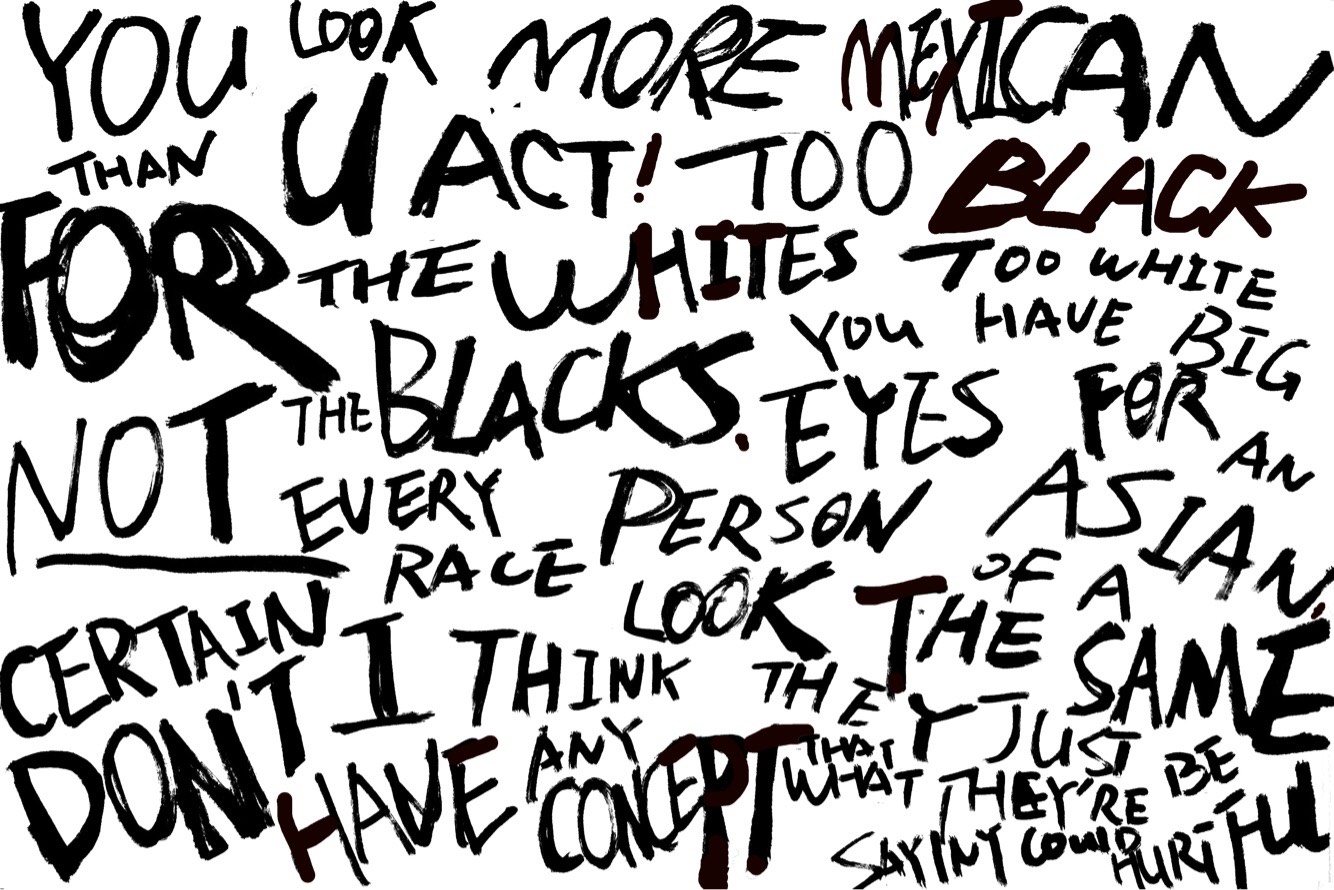 “What are you?” “Where are you really from?” “You don’t act like a normal Black person.” “You don’t look like you speak Spanish.” “I never think of you as a real Asian.”

These statements capture a more subtle form of racism. Known as microaggressions, these phrases are everyday verbal snubs or insults that communicate hostile, derogatory or negative messages.

Microaggressions create and enforce uncomfortable, unsafe and sometimes even violent realities onto people’s everyday lives in their work, home and school environments.

Psychiatrist Dr. Chester Pierce coined the term in the 1970s as subtle racial put downs that degrade health over a lifetime. Pierce wrote that microagressions may contribute to mental health difficulties like depression or anxiety and also physical health consequences, such as pain and fatigue.

This form of prejudice has been used against people in conflicts involving race, gender, intersectionality, people with mental illnesses and ageism.

Sue defined the term microaggression as “brief and commonplace daily verbal, behavioral, or environmental indignities, whether intentional or unintentional, that communicate hostile, derogatory, or negative racial slights and insults toward people of color.”

Sociology Professor Rebecca Kim teaches a first-year seminar on the topic of race and ethnic relations where students focus on the wider structural factors related to inequality.

Kim said these phrases make people feel as if they are different and diverse in a bad way as microaggressions, intentional or unintentional, are targeted to people based upon their membership of a marginalized group.

“Just having to explain their race or things related to their ethnicity, even if those people are not being malicious, it is one less thing minorities wish they would have to deal with,” Kim said.

Senior Alyssa Rosas, who is Mexican-American, said she has always experienced microaggressions, as her physical appearance does not match the stereotypical image of Mexicans.

In high school, Rosas overheard a student who is Mexican talk about her in Spanish while referring to her as “that White girl over there.”

“I turned around and asked them a question in Spanish,” Rosas said. “They had the most horrified look on their face because they had no idea I could understand what they were saying.”

When she studied abroad in Buenos Aires, Argentina, Rosas experienced even more examples of microaggressions.

“I think I heard ‘You don’t look Mexican, you look White’ the most when I studied abroad,” Rosas said. “When they noticed my advanced Spanish, it was very common to hear this comment from others.”

Rosas said hearing these comments have never really bothered her as she usually “just laughs it off.”

Rosas said she likes to give people the benefit of the doubt and assume they are not trying to make a racist remark.

“I think that sometimes people are genuinely curious about a person’s background, race or culture and that their questions are not intended to come off as ‘racist,’” Rosas said.

Kim said she believes while microagressions are committed on a wide range of intentionality and unintentionality, intent should not really matter.

“It doesn’t matter if it was intentional because it was felt by the person who received the comment as a negative emotion,” Kim said.

Senior Rachel Rodriguez, who is half-Hawaiian and half-Mexican, said hearing microagressive comments directed at her makes her feel self-conscious about her appearance.

Rodriguez said it is common for people to ask her where she is from and comment that she is racially ambiguous.

“I feel that people often believe they need to relate to me through my racial background,” Rodriguez said.

She said she does not feel oppressed by this language as she understands these comments stem from ignorance and curiosity.

While attending high school in Upstate New York, Rodriguez said she often got questioned about her race as mixed-race people were not common.

She said she remembers when a history teacher asked about her personal impression on the annexation of Hawaii in front of the whole class after learning she was from Hawaii.

Rodriguez said she often feels like a token of Hawaiian culture as a member of the underrepresented group. She said she feels like people feel obligated to show interest in her racial background in a perfunctory effort to make her feel included.

After growing up in a military family and constantly meeting new people, Rodriguez said she got used to people asking her these types of questions. She said many of her friends who are racially mixed have experienced similar situations.

Rodriguez said she has experienced a slow accumulation of microaggressions, starting from childhood and over a lifetime, making it feel common in her life.

In addition, he said critics believe reporting microaggressions to college authorities empowers administrators to gain greater control over campus life. They argue monitoring speech deprives students of the ability to learn how to coexist without adult supervision or intervention.

The use of microagressions on college campuses have become a popular topic of discussion. Sue wrote that microaggressions are particularly common among the educated and affluent populations of American colleges and universities.

Professor Rebecca Kim argues microagressions are amplified on college campuses as a wide group of students from many different backgrounds are put together in the same space.

“I do not think that having a more or less diverse student body will change this as I have heard these comments from people of all races,” Rosas said. “I don’t think that one group of people are making these comments.”

Rodriguez said she thinks more diversity actually subdues the effects of microaggressions as they will not realize how they come off.

“The more diverse a student body is, the more likely people will become used to seeing other races and the more common microaggression phrases will be,” Rodriguez said.

Kim said some students are advocating for a cultural competency class to add to Pepperdine’s curriculum, allowing students from different backgrounds to come together in important discussions of race.

“It’s not about changing your understanding of American racial history or relations,” Kim said. “But instead asking ‘How can I talk to you without offending you?'”

Pepperdine’s commitment to diversity stems from a Christian heritage that compels us to treat every individual equally with respect and compassion, according to the university website.

“Our faith also confirms that we are finite and therefore our knowledge is incomplete,” the website states. “It is through the inclusion and experience of others from diverse points of view that we often begin to see dimensions of truth previously unseen by us.”

Here are some resources on the topic of race and diversity on campus: