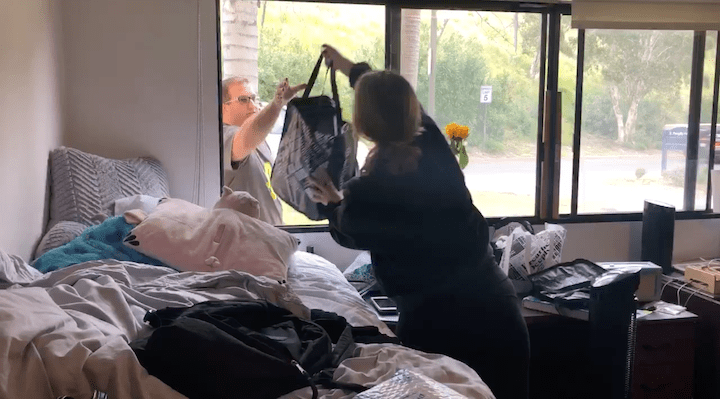 Freshman Mackenzie Bodden hands her father a bag through the window as she packs to move out of her dorm in E. Pengilly House.

For junior Hannah Tu, March 11 started off as a normal Wednesday: She woke up, grabbed her phone and started reading her email before getting ready to go to convo.

One scroll and tap later, her whole day — and her whole world — was suddenly upended.

Pepperdine administrators emailed students at 8 a.m. that morning announcing all students had to leave campus as classes transitioned to online learning for the rest of the semester to prevent the spread of COVID-19.

As an international student from Taiwan, leaving Pepperdine involved more than just packing up her Lovernich apartment. One of the documents Tu needs to enter the United States was outdated, posing a risk that Tu would not be able to come back if she flew home.

After learning it could take 10 days for the Office of International Student Services to renew her I-20 form, Tu worried she would not have anywhere to go once the deadline to leave came in five days. Students were able to petition to stay on campus, but had to wait for Pepperdine’s Housing and Residence Life (HRL) to review their applications.

Tu’s experience was similar to over 2,000 students who were forced to figure out how to quickly move out of their campus housing. In interviews over the past two weeks, a dozen students — now all across the country and around the world — described feeling devastated, overwhelmed and blindsided by the sudden announcement to go home.

“Every ounce of normalcy was just gone within 24 hours,” sophomore Faith Pearlman said.

The Toll of Last-Minute Plans

The scramble to move home caused many to face financial and emotional hardships. Senior Devin Bristow said he had to take out an emergency loan for $1,000 to travel back home to Paterson, New Jersey.

“I didn’t have someone that I can go to and be like, ‘Hey can I come over your house?’ Bristow said. “I didn’t have the money to just up and leave.”

Without the means to go home, Bristow petitioned to stay in his Drescher apartment but was denied.

“When I got that email, I was remarkably disappointed,” Bristow said. “I felt like I was forsaken, like I was given up on.”

Bristow said the rush to buy his flight home and figure out how to ship all his belongings to the East Coast made his last days on campus a taxing ordeal.

“I never felt like I could just sit down and get a breather,” Bristow said. 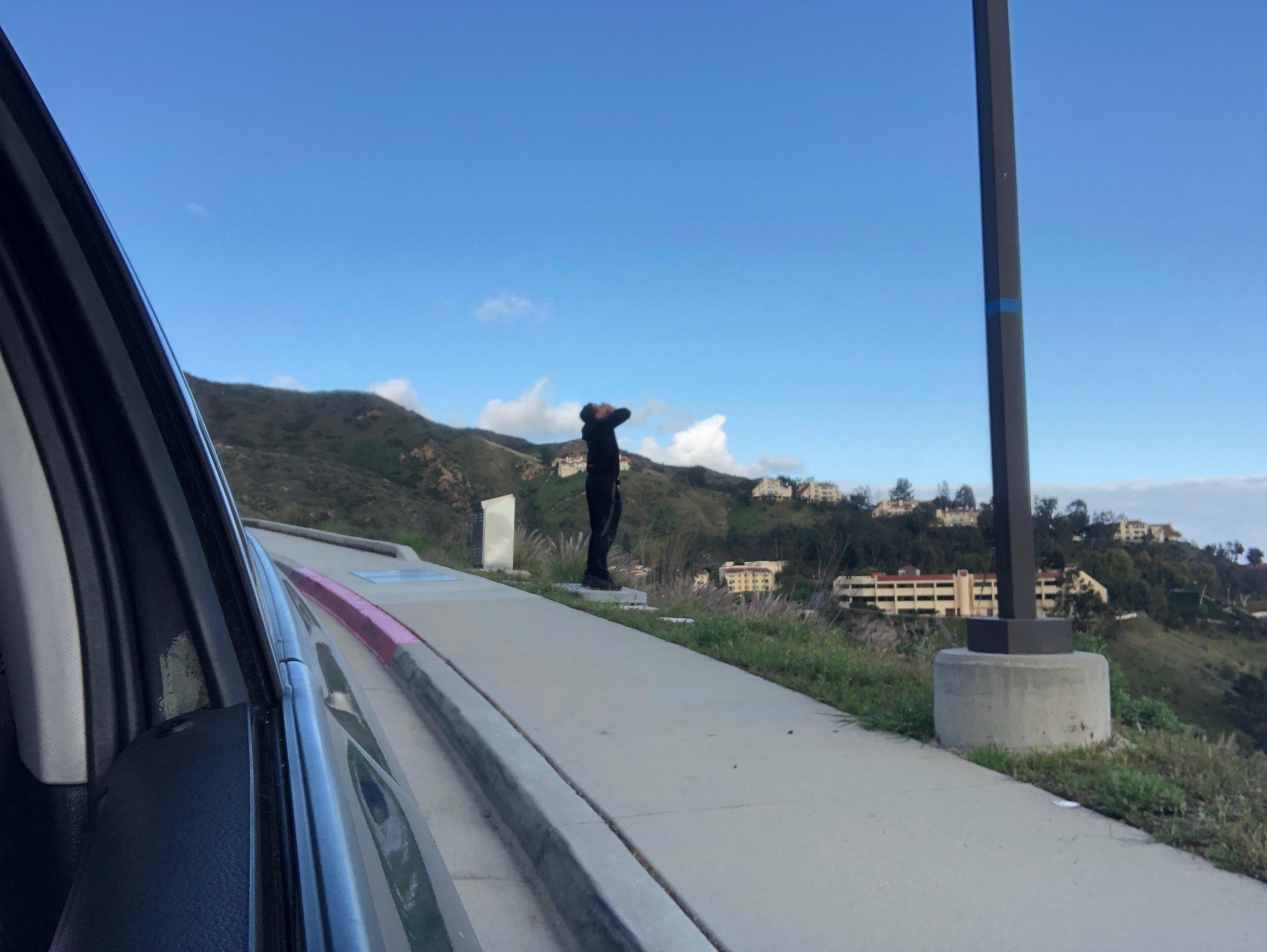 Senior Devin Bristow yells “goodbye” to Pepperdine after moving out of his Drescher apartment.

“Having a hard deadline and having this whole mentality of everything shutting down just made me go into emergency survival mode,” Ramsey said.

To move out in time to drive 24 hours home to Arlington, Texas, Ramsey had to miss the final two days of class in Malibu.

After Pepperdine announced the decision to go remote Wednesday, March 11, the last two days of in-person classes were held that Thursday and Friday. Having to balance academics on top of preparing to leave left many overwhelmed.

Junior Jonathan Cottrill had both a midterm and class presentation that Friday.

“Then the idea that ‘OK, then Saturday I need to pack,’ and then basically ‘Where am I going to go Sunday?’” Cottrill said.

For Cottrill, figuring out whether to go home to Ohio was complicated because his parents are in Florida for the time being.

Cottrill applied to stay on campus to have more time to figure out where he could go. His petition was denied, and he is now home in Ohio.

Sophomore Jasmine Lee stayed with her friend and fellow sophomore Faith Pearlman for five days in Santa Clarita, California, after they both moved out of their rooms in Seaside.

“My mom has rheumatoid arthritis, and with the medicine that she takes, she could be at more of a risk to [COVID-19],” Lee said.

Worrying about her family in Seattle, Washington, stressed Lee out more than packing up her room, but she eventually returned home to avoid travel restrictions that could prevent her from doing so in the future.

“[Moving] out was like a whirlwind,” Lee said. “But at this point, it’s more important to be safe at home with my family than to worry about the little things that went missing along the way.” 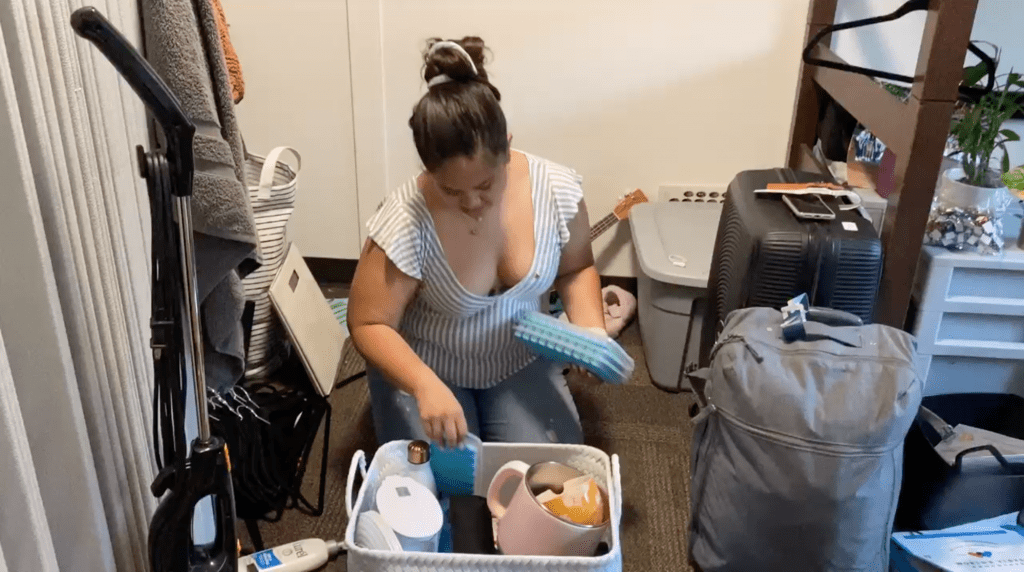 Freshman Nicole Lambert puts her belongings in boxes as she prepares to move out of Pepperdine.

Pepperdine is now in its third week of online classes. Time at home has finally allowed some students to process their emotions over the semester being abruptly cut short.

“I didn’t really start processing anything until I got home because there wasn’t time to,” senior Audrey Rhynerson said. “It was just like ‘Gotta get to the next thing.’”

Rhyernson’s dad flew to Malibu to help her complete the 24-hour drive home to Austin, Texas.

“It’s hard sometimes to reconcile our seemingly small Pepperdine experiences in the midst of everything that’s happening in the world,” Rhynerson said. “But I think it’s important to give them some space, give them some value, process them.”

When asked to reflect on what Pepperdine could have done better to help students move out, many felt the news would have been less of a bombshell if administrators revealed they were discussing the possibility of clearing campus.

“I could have mentally prepared myself a little bit of like ‘Oh, this is an option. What would I do if they made that decision?’” Ramsey said. 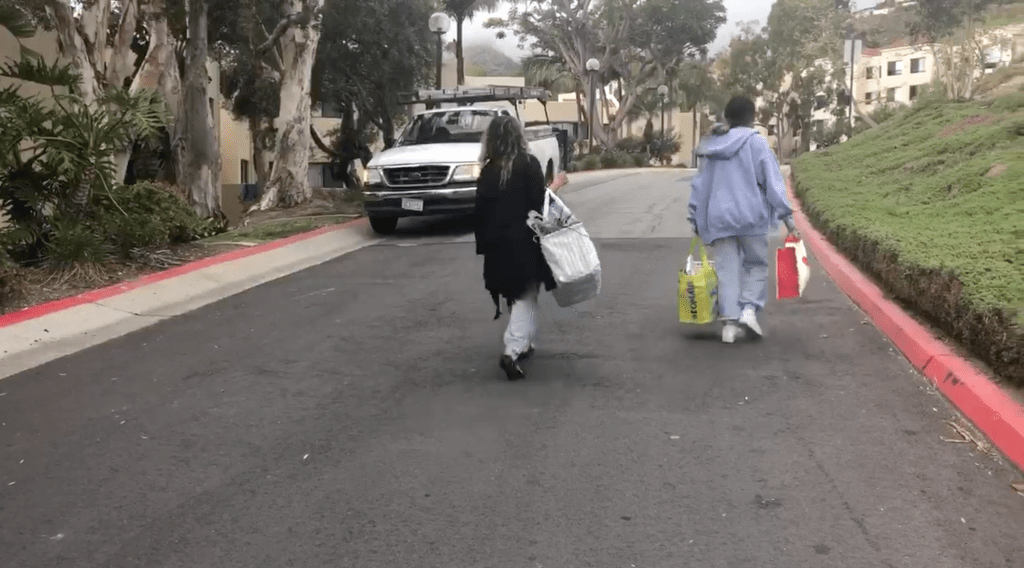 Freshman Kylie Guieb walks on Upper Dorm Road with her mom after they packed up her dorm in E. Pengilly House.

Navigating this new normal has been hard now that the lines between college and home life are blurred.

“I kind of feel like a weird mix between winter break or summer break,” Rhyernson said. “I kind of also feel like I’m in high school and I’ve just given my autonomy away.”

For others, it’s taking classes online that poses major difficulties.

Tu was able to receive her new I-20 form just one day after requesting it from the Office of International Student Services. She is now home in Taipei, Taiwan.

“I can’t predict what will happen, but at least at home back here in Taiwan, everything’s stable, and my parents are here,” Tu said.

Though the unanticipated end of the semester left thousands burdened with figuring out how to get home, many found community and support among each other those last few days on campus.

“Everybody was willing to just make the most of it,” Cottrill said. “I think it shows the resilience of a Pepperdine student and the ability that we’re able to just kind of come together and support each other.” 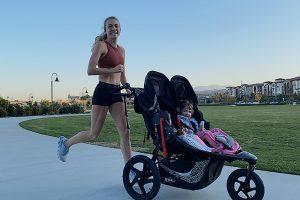 Lauren Floris runs an afternoon double with a double stroller carrying her daughters Liv and Marigold. Floris trained for the Olympic...
Copyright 2013 Jupiter Premium Magazine Theme
Back to top