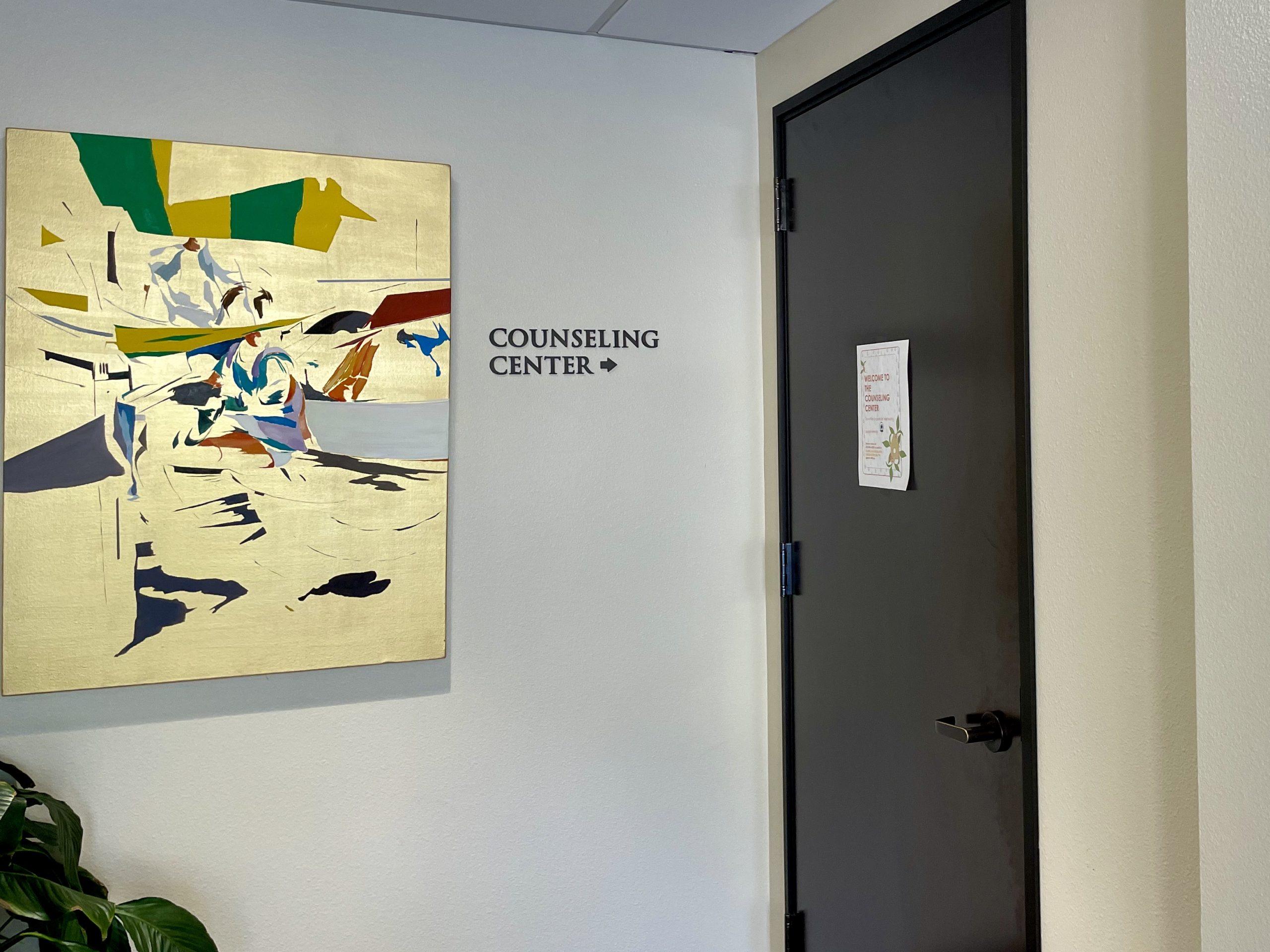 The Pepperdine Counseling Center welcomes all students for mental health services. Connie Horton, vice president for Student Affairs, said the Counseling Center is just one of many on-campus resources for students who are struggling. Photo by Liza Esquibias

As a first-year student, junior Olivia Miller would get ready for a counseling session to speak with a therapist about her anxiety, and her roommate would ask where she was going. Miller said she would reply, “I am going to a meeting.”

Being a college student can come with an abundance of feelings — loneliness, anxiety, self-doubt and fear are just a few. Miller said opening up about mental health and therapy can also bring all those emotions to the surface.

Students, including Miller, said shame around mental health is present on Pepperdine’s campus, and it is vital that students are comfortable sharing their thoughts, emotions and experiences without judgment or feeling alone.

“It is so stigmatized for college kids in general if you say you’re going to a counselor,” Miller said. “But there’s nothing wrong with it. If anything, you have such an advantage for yourself because you’re doing yourself so much good by going.”

How the Mental Health Stigma Still Exists on Campus

Sophomore Yulbee Shin said she felt her mental health declining significantly during the remote 2020-21 academic year, so she called the Pepperdine Counseling Center’s crisis line. Prior to that, Shin said she never spoke about how she was feeling because she did not see mental health as a priority.

This is Shin’s first semester on campus, and being in a new environment with strangers makes sharing personal feelings intimidating, she said. Leaving isolation was an overwhelming life change for Shin.

“Starting college after a pandemic — it’s such a different experience for us, because the last time we were on a campus like this, we were in high school,” Shin said.

Miller is an athlete on the Women’s Track and Cross Country teams and said she has struggled with her mental health for several years. With so much of her life focusing on staying physically fit and healthy, Miller said she hopes society will soon highlight the importance of mental health just as much.

Both Miller and Shin said they know of more students with admitted mental health struggles, but asking for help still seems stigmatized.

“Among my friend group, we’re pretty open about mental health,” Shin said. “We talked about it a lot as well as past experiences we’ve had on and off campus. I do hear a lot of people just being like, ‘I have anxiety,’ or ‘I’m depressed,’ but whether they do something about it, I’m not sure.”

Sophomore Jessica Odishoo, a Healthy Minds ambassador for the Student Wellness Advisory Board, said she has noticed students are becoming more open about their feelings. Many, however, do not speak about diagnosed mental illnesses in particular, which is something she is trying to change with SWAB.

“We all struggle with aspects of anxiety and have times when we’re depressed, but the diagnosis of actually having anxiety and having depression is a bit more stigmatized on campus,” Odishoo said.

Sophia Fang, a counselor at the Pepperdine Counseling Center, said she observed the pandemic worsen students’ sense of loneliness and anxiety more than before. While returning to in-person classes and campus life can be exciting, Fang said some students are struggling to break away from the tendencies of lockdown.

“Since we are coming back on campus, a lot of students are just having a harder time adjusting to campus life,” Fang said. “Loneliness has been the big thing, especially during the pandemic when everybody was isolated, so that’s not a surprise, and it’s reasonable most people still feel more isolated.”

As a licensed psychologist and former director of the Counseling Center, Connie Horton — vice president for Student Affairs — said statistics have shown Pepperdine students experience loneliness at a higher rate than the national average. Emerging from a time of forced aloneness, students seem to experience heightened social anxiety and a loss of interactive skills, Horton said.

“As we’re coming back, we don’t want people to have shame about that,” Horton said. “I get that they do sometimes, but we want to normalize the human condition. We’ve all got a story. Everybody’s got their stuff.”

Horton said there is also a pattern of hesitancy among students to admit how they are feeling because they assume they are the only ones struggling.

“When you’re hurting, you look up here and feel like everybody else is having fun, but what you’re not seeing is other people who are isolated or the people who are even sitting with the group not really connected,” Horton said. “Anxiety, for example, is really common here.”

The mental health stigma on campus has decreased since Horton began working at Pepperdine in 2005, she said. Still, there are many reasons why students continue to uphold the stigma and need help separating themselves from mindsets they held most of their lives.

“Eight hundred others are going to the Counseling Center, so it’s very busy,” Horton said. “But that doesn’t mean somebody who’s really hurting may not have a stigma that’s keeping them from going, so we want to keep working on that issue. Sometimes, it may relate to their family background, it may relate to if they’re an international student — the country they came from — or gender. Men are less likely to feel comfortable going.”

Taking Steps Toward Breaking the Stigma

Miller has continued to visit the Counseling Center since her first year. Therapy has given her an outlet to express positive and negative emotions, Miller said, and she hopes it can become a point of pride rather than embarrassment for students.

“I don’t ever think it should be a secret that you’re helping yourself be a better person for yourself and for other people,” Miller said.

In the past, Miller said she was self-conscious about going to therapy. After much self-reflection, Miller said therapy empowers her to talk to others about mental health.

Off campus, Miller works with nonprofit organization the Hidden Opponent to break down the stigma of student-athlete mental health. On campus, Miller attends the SWAB’s general meetings to speak on behalf of Pepperdine athletes, works with the Pepperdine Counseling Center to raise awareness and utilizes counseling herself, she said.

“Between freshman year through COVID, I maybe had one person ask me if I saw a counselor or if I needed to see anybody,” Miller said. “This year, being back on campus — probably because I’m more outspoken about it — I’ve had probably a dozen student-athletes and friends be like, ‘How can I do this too? How can I get in touch with it?’ I now see how well it works for people.”

Horton said free counseling and the Student Care Team are resources she hopes students take advantage of on campus. There are many other people for students to reach out to as well, Horton said.

“This is what I say to the ones who are nervous to go to the Counseling Center,” Horton said. “If you’re not ready to do that yet, but you need some support — do you want to see a chaplain? Do you want to see a resilience coach? Want to talk to a mentor or have a conversation with your Resident Director?”

Odishoo said the ways Pepperdine’s resources propelled her mental health journey inspired her to help others when she moved to the Malibu campus for the first time in August.

Surrounding herself with people who support, encourage and validate her feelings — along with utilizing the Pepperdine Counseling Center — has been invaluable, Odishoo said.

“Being a part of SWAB on campus is probably the best decision I made regarding my mental health because it puts a strong focus on it in my life,” Odishoo said.

Speaking out about mental health struggles benefits not only the person opening up but also those listening, Odishoo said. Sharing healthy coping mechanisms, lending a shoulder to lean on and making resources — such as therapy — a normalized option can change someone’s future.