Student Teachers Stay Set on Their Career Paths Despite Challenges 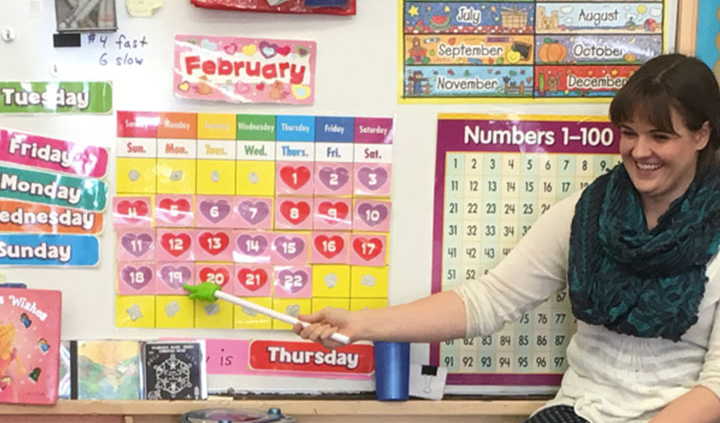 Students opting to earn a teaching credential as part of their undergraduate degree live a double life — that of a student and teacher.

“The students that we tend to have are super motivated because they want to be teachers, and they’re so excited,” Education Prof. Carrie Birmingham said. “So the kind of qualities we see [in student teachers] is they’re not learning to be teachers as a fallback job.”

Aside from learning skills like time management and how to work with diverse students in different school environments, students are having to deal with the uncertainty with becoming a teacher, Birmingham said.

Making the Decision to Pursue Teaching

“I have other family members that are like, ‘What are you doing?’” Shackelford said. “I feel like there’s an assumption that, ‘those who can, do, and those who can’t, teach,’ and so teachers are the people who didn’t have any other better options. That’s really frustrating because in a perfect world, teachers are the most qualified and the most educated. There’s just a prevailing stigma that teachers are incapable of doing anything else.”

Alumna Hannah Coughlin (2019) graduated with a Liberal Arts major and a multiple subject credential. She said she struggled with the idea of sitting in a classroom for six hours a day while growing up.

“Everything seemed almost too routine, lacking innovation and opportunity for play and curiosity,” Coughlin said. “I remember telling my mom, also a fellow teacher, ‘I would love to work with kids and be a teacher, but I just don’t think I could step in to a classroom again; I don’t like the way education looks.’ She listened lovingly and decided to challenge me by replying, ‘Then change it.’”

Students gain firsthand experience working with children of various grade levels in incremental steps. The first semester requires students to teach in a classroom for 20 hours, 50 hours the next semester and part-time teaching for 160 hours followed by full-time teaching during senior year. While the teacher preparation program is relatively small, with about 40 students total, these students are diligently working through the requirements, Birmingham said.

Steps to obtaining a teaching credential in California. Infographic by Anastassia Kostin.

“They always have concerns at the beginning, and they can’t imagine how it can be done,” Birmingham said. “But it’s incremental so just about everyone manages it just fine.”

Though the teacher education program is 34 units on top of a student’s major, more than half finish their bachelor’s degree and teaching credential in four years. The rest receive their credential after finishing the semester of full-time student teaching, Birmingham said.

In addition, teacher candidates have a culminating assessment called the edTPA.

“We basically have to prove in 50-ish pages that we are competent teachers,” Alumna Caitlin Menez (2019) said. “It consists of creating a three lesson unit, filming your lessons, analyzing your teaching as well as student work, and writing as much as you possibly can about it.”

Despite the amount of steps required to become a teacher, salaries are often low — $54,720 is the average salary for those working in the Los Angeles Unified School District, according to Indeed.

“If you were to pay teachers like you would a decent babysitter, let’s say, you know, $10 an hour per kid and you’re in a class of 25 kids and you times that by the eight-hour school day and times 180 [days], that’s still around $100,000 that teachers should be making,” Shackelford said. “In Oklahoma, I saw one teacher’s payroll was like $36,000 before taxes.”

Aside from low wages, student teachers can expect other challenges.

“Some challenges I expect are long work days, politics, interacting with students’ parents and differentiating instruction for different academic and learning levels,” said Christina Haug, a senior Liberal Arts and Teacher Education major. “I think these challenges just add to the importance and quality of the profession. I’m a little nervous about them, but they do not dissuade me by any means.”

Faith in the Classroom

Haug said she looks to the Bible verse John 1:1-14 when she needs to be reminded of why she wants to become a teacher.

Coughlin said she sees teaching as not only a creative endeavor, but also a ministry that she gets to be a part of every day.

“Matthew 18:3 tells us, ‘Truly I tell you, unless you change and become like little children, you will never enter the kingdom of heaven,’” Coughlin said. “To love and to learn myself from these little ones has been humbling and trying. I see daily the work of my hands within the classroom.”

Whereas the U.S. Constitution prohibits public school-sponsored prayer or religious indoctrination, Shackelford said she believes that having a religious background as a teacher can help teachers approach their job from an empathetic worldview.

“When you think about it, Jesus was a teacher, first and foremost,” Shackelford said. “I think the fundamental necessity, regardless of what religion teachers have, is just empathy and an ability to encourage and listen to students.”

Teachers in the News

The wave of teacher strikes sweeping throughout the nation in 2018 began with the nine-day West Virginia strike in late February when about 20,000 classroom teachers shut down schools across all 55 counties, according to Rethinking Schools.

That same month, Los Angeles teachers, representing the country’s second largest school district, reached a tentative deal to conclude a six-day strike. Yet, the movement is evolving into something deeper than calls for school funding, teacher wages and benefits, according to Axios.

Although the strikes are inconvenient for both students and faculty within schools, they are important in ensuring that the needs of both students and teachers within the public school system are met, Coughlin said.

“As long as there is a federally funded education system, we can expect to see teacher strikes,” Coughlin said. “This reality does not deter me away from this career, but only empowers me to live up to the undaunted and bold teachers before me.”

“I think politics and education have always been intertwined — it’s part of the story that education tells,” Haug said. “Sometimes the politics part is louder than other times, and that’s just part of it.”

Preparing to be a teacher can be an emotional process as one essentially pours their personality into . This is what drives today’s students to pursue their paths toward becoming teachers, despite the political ties with the career, Birmingham said.

“People still want to be teachers because teaching at its best is an essentially human activity, deeply rooted in human relationships,” Birmingham said. “Even though there is a lot of negative press about teaching now, there are still people growing up with the gifts and the calling to engage in these kinds of intense relationships.”

Shackelford said teachers are expected to have everything together, despite them being flawed human beings just like anyone else.

“In my personal experience, the teachers I have the most respect for are the ones who have been incredibly vulnerable and open with me about their own shortcomings and struggles,” Shackelford said. “I think a good foundation of good pedagogy is the understanding that you are giving so much of yourself to your class, and they are giving so much of them back to you. It really is reciprocal.”

One of the best things about the teacher preparation program, according to several Education students, is the guidance of the Education professors such as Birmingham, Elizabeth Yomantas, Stella Erbes, Carrie Wall and Michael Gose.

“Mentorship stretches far beyond the classroom,” Coughlin said. ”I have been given a gift far greater than words by the love and continued support of all of my professors.”

Aside from connections with professors, Menez said the connections with the children helped her realize that one of the best feelings is seeing her “kiddos” understand a concept they first struggled with.

“Being a teacher helped me realize that I might be the only person in a child’s life that is rooting for their success and actively pushing them to pursue their education,” Menez said. “I love being able to support my students and help them become kind-hearted adolescents with a passion for learning.”

Haug teaches through the Jumpstart program at Malibu Methodist Nursery school. She recalled a memorable story where she was riding a trike along a path when 4-year-old Gavin waved her down from across the playground, screaming.

“He reached down and grabbed a little furry black thing off my black trike wheel and said, ‘There was a caterpillar on your wheel. I didn’t want you to run over it,’” Haug said. “I asked Gavin how he could see the caterpillar from 50 feet away since it blended into the color scheme of the wheel. ‘I just saw it,’ he answered. Gavin taught me that day that I had been looking, but not actually seeing for a long time. I’m working on seeing now, for real.”

It is moments like these that remind student teachers why they choose the career path they did, despite the strikes, the many steps to earn a credential and the need to balance the role of a student and teacher.

“I’m very passionate about literature and language,” Shackelford said. “I just hope that that passion translates not into like, ‘Oh, I want you to love this as much as I do,’ but just show students how nice it is to have something that they love and care about. Hopefully that helps students find what it is that makes them happy to be who they are, and also challenge them to think critically about their world.” 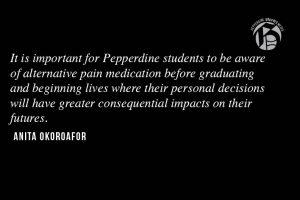 It is time for society to focus its efforts on pain remedies that do not lead to addiction. This is necessary, especially...
Copyright 2013 Jupiter Premium Magazine Theme
Back to top