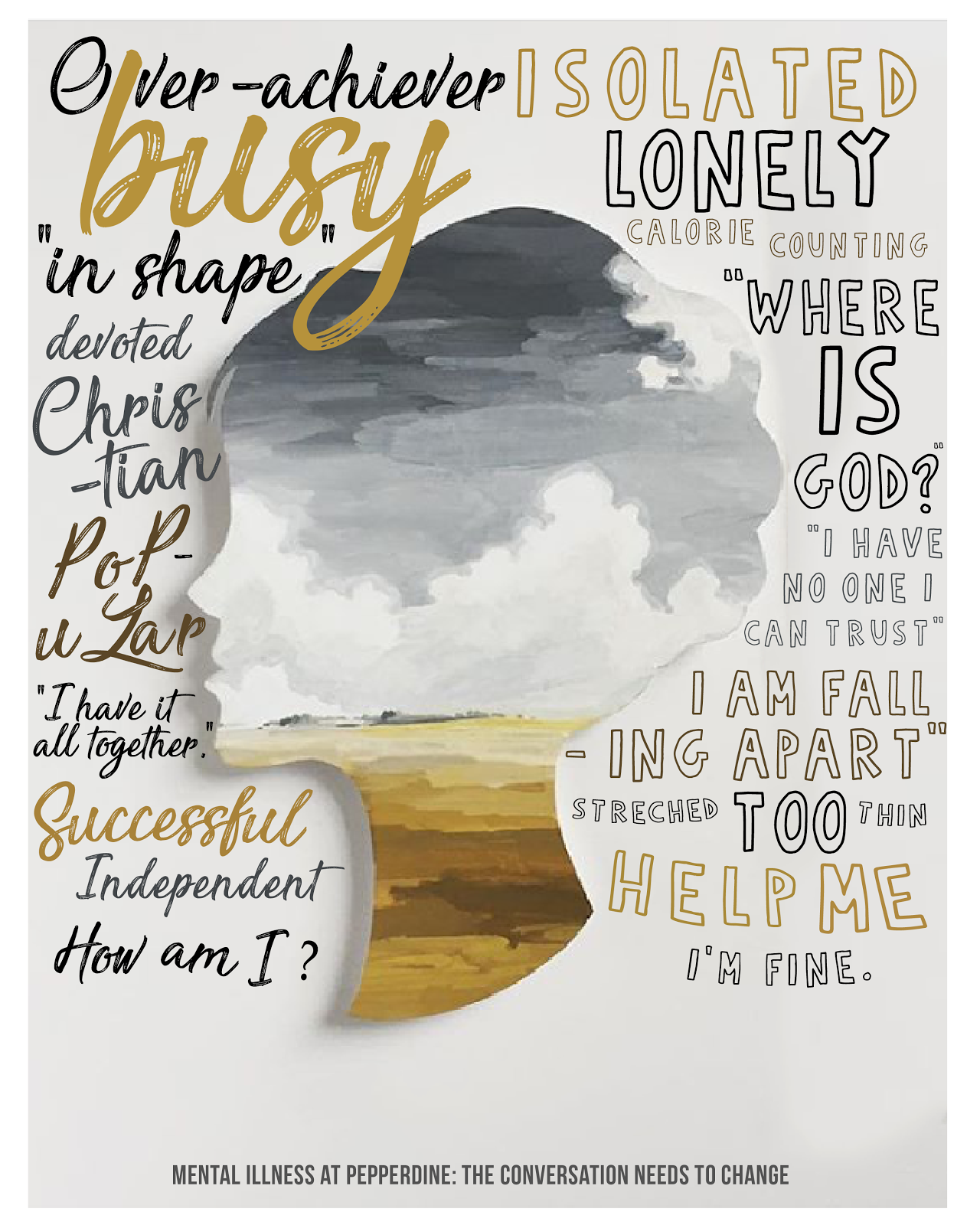 The stigma behind seeking mental health treatment at Pepperdine is going away— slowly but surely. Pepperdine University is home to approximately 3,500 undergraduate students, all of whom are eligible for free services at the Pepperdine Counseling Center.

Use of the counseling center has increased dramatically over the years, according to Counseling Center Director Connie Horton. When Horton arrived in 2005, the center had seen only 270 students the year before — a stark comparison to this year’s 750 students utilizing services.

This data jump is consistent nationally as well, as the Center for Collegiate Mental Health 2015 Annual report stated that the average level of counseling center utilization grew by 30 percent whereas enrollment only increased by 5 percent. As a result, universities nationwide have been increasing their counseling employment rates or implementing hotlines for extreme circumstances.

The Pepperdine Counseling Center offers a variety of services from individual counseling sessions to group therapy, as well as hosting a number of targeted sessions for certain concerns. Although the center is free, the stigma behind receiving treatment may deter some students from seeking services.

Adjunct Professor of Psychology Amy Di Francia said that there is a stigma around receiving mental health treatment, but that it has gotten significantly better in the past 50 years. Once an undergraduate at Pepperdine herself, Di Francia said the stigma has lifted even more since her time there. The reason for the still existing stigma is based in history, as typically people only went to counseling if something was terribly wrong, or if they were deemed “crazy,” she said.

“Nowadays the trend is more to go to therapy to talk through life transitions, day to day problems, it’s not always about really big diagnoses but people are still afraid that if anyone finds out they’re in therapy they’ll automatically assume you’re crazy, there’s something wrong with you,” she said.

The stigma can also exist specifically amongst college-aged students because they are expected to rely on their friends for advice, and sometimes view counseling as something only for older people. For students it can be hard to recognize the line where friends are no longer enough, and outside help is needed, Di Francia said. The stigma also can be perpetuated in a culture where we are constantly expected to be self-sufficient and not need additional support.

“You’re expected to be strong and independent and not need to kind of admit that you need help sometimes, so that’s hard,” Di Francia said.

Religious ties to the stigma traditionally depend on the particular church a person is part of or the particular family’s view on the matter, Horton said. Some incorporate the need for mental health professionals into their faith worldview, whereas others believe concerns can simply be “prayed away.”

In studying people’s justification systems, Henriques has encountered the tension people face when they attribute their mental health to science or religion and how it manifests itself when that tension isn’t adequately navigated.

Charlotte Wallace is a freshman at Pepperdine and has suffered from anxiety since she was a small child. During her first semester at Pepperdine, Wallace sought out the Counseling Center to help with her anxiety, although she didn’t tell anyone she was going to counseling.

Wallace had never heard of anyone going to the counseling center and felt awkward even making her first appointment, so she didn’t discuss it with anyone. Wallace ultimately decided to seek outside counseling in Malibu, which she continues to do. Eventually she opened up to a friend, who she found out also sought out mental health counseling.

“We were able to bond over the fact that we both were doing this thing that nobody talked about, but everyone was kind of thinking about,” Wallace said.

Mental health in general seems to be something that people just don’t talk about, and tends to be very taboo, Wallace said. Because of the strong culture of individualism and perfectionism at Pepperdine, no one wants to open up, especially to people they don’t think would understand them, Wallace said.

“Everyone wants to look like they have it together, and because of the stigma around counseling, no one wants to say, ‘I’m struggling and I need help,’” Wallace said.

Despite the subject still being slightly taboo, there has certainly been a movement toward less of an explicit stigma surrounding mental health and the idea of therapy, Henriques said. The stigma does still exist, however, and society seems to be generally confused about how to think about mental health as a whole. Although the concept of stigma is incredibly complicated, there seems to be a basic narrative in society to reduce the stigma surrounding mental health, he said.

“A lot of people are dealing with mental health issues and they are terrified about sharing them, and if we can help people reduce the shame of the fact that they’re dealing with this, they can get more help,” Henriques said.

A lot of the reduction in stigma can be attributed to the “psychologizing” of our society in the past 30 years, Henriques said. The mental health industry has grown significantly, and in some places such as New York or Hollywood, seeing a therapist is seen as a status symbol or a badge of honor. Additionally, there have been a number of de-stigmatizing movements as well as educational efforts to remove some of the shame behind seeking mental health treatment.

Although the explicit attitudes of college students would typically be more accepting about mental health than older folks, or the less educated, there is still a rising rate of loneliness, Henriques said.

A survey at Pepperdine in 2011 indicated that 64 percent of Pepperdine students reported feeling lonely, a number that was higher than the average of 57 percent at other universities.

Some of the loneliness issues stem from a lack of emotional awareness and ability to process and deal with negative emotions, Henriques said. We are increasingly living in a world run by social technology where we form “snap chat connections” and face a deficit in real authentic connection.

“There are enormous expectations for perfectionism and kind of a shallow public self to be on display, and very limited capacities for breaking through those filtering barriers to present the public self into an intimate, authentic connected way,” Henriques said.

People are generally not well-educated about their psychological needs and don’t understand the profound need to be known and valued as a human being, Henriques said. Because we live in a society that hasn’t adequately cultivated the need for emotional value, we face extreme loneliness, and people turn to suicide as an escape solution.

One in every 12 U.S. college students make a suicide plan, according to National Data on Campus Suicide and Depression. Even though they may not go through with it, suicide continues to be the second leading cause of death amongst 20 to 24 year-olds.

Kayla Martin is a senior psychology major at Pepperdine and also seeks outside counseling. The stigma of mental health at Pepperdine seems to be paralleled with the standard of perfectionism, according to Martin. Because many students appear to have it all together, having a mental health problem can make people feel like they are falling short of that standard.

Martin said she is not sure if the stigma has changed since she was a freshman because she wasn’t really paying attention to it as much as she does now as a psychology major. Lots of times mental health problems are seen as shameful because we can’t see them, she said.

“Mental health problems are seen as shameful primarily because you can’t see them, and people assume they aren’t real or as serious as they are,” she said. “There’s no shame in breaking your leg, because you can see that.”

Martin has no shame in telling people that she is in therapy, but has been the recipient of some judgment as a result of saying so.

“People get really weird and awkward when I tell them I’m in therapy,” she said. “Especially if someone asks me to hang out, and I tell them I have therapy instead, they really don’t know how to handle it.”

Martin also said that she thinks religion plays a role in perpetuating the stigma, and making people feel less than for having a mental illness. Asking someone if they have prayed about their problem can feel very demeaning and oftentimes diminishes the severity of the issue.

“There’s this weird belief that if you pray hard enough and believe enough and you and Jesus are tight enough, then you won’t have a mental illness,” she said.

Martin thinks that the stigma will only lift when people are vulnerable enough to share their experiences and really talk about mental health. Most people at least know someone with a mental health problem if they are not afflicted themselves, and the conversation needs to become normalized if it is ever going to change, she said.

Although the Counseling Center treats a wide range of conditions from schizophrenia to normal developmental stressors, the most prevalent are mood disorders like anxiety and depression, Horton said.

A big part of the problem is increasing levels of stress and less social support. Many students will have high social contact, but lack really deep friendships. For these students, many feel like they are constantly surrounded by people, but rarely have a connection where they are comfortable speaking into others’ lives.

“The answer for many of us is, is there anything we can do to bring down the stress or at least the way we are thinking about it, and then how do we increase relationship. Because there is so much research about that — social support is critical,” Horton said.

Seeking counseling can help jumpstart this search for meaningful relationships, as the therapeutic relationship can be a metaphor for true connectedness. The loneliness statistic at Pepperdine is still prevalent and is still concerning, Horton said. The Counseling Center is waiting for this year’s annual review to see if the statistic has changed at all.

Discussing therapy and being honest about it will help the subject to become more normalized, and hopefully more acceptable, Di Francia said.

“Overall it’s just nice to know that you’re not alone,” she said. “And I think that’s what makes me so sad about when people go through things and they let the stigma hold them back because If you break counseling down to its heart, it’s a relationship.”