Staff Editorial: Those who fail to educate themselves, fail 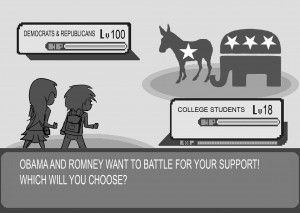 As Election Day approaches, college students across the nation are witnessing one of the most polarized presidential races in their lifetimes. This year, however, marks the first time most college students are eligible to vote in a presidential election. Throughout the election season, the candidates have sparred on the topics presenting Americans the most concern, such as the economy, domestic issues and foreign policy. Meanwhile, the main question that many young undecided voters are asking remains: What exactly does each candidate stand for and how will the future president’s policies affect me in the future? The trivialization of the debates by the media and on the web has only exacerbated the challenge of getting to the core of the issues and where each candidate stands.

Ironically, the takeaway from the debates often perpetuates indifferent attitudes from the younger crowd. Many college voters have walked away from viewing the debates just as uninformed on each candidate’s stances as before, recalling only mentions of Big Bird, binders full of women and horses and bayonets. Nonetheless, it ultimately falls on the individual to educate oneself on the candidates and the issues. More than ever, the college voice needs to be heard. Not only is it a civic duty to make informed choices at the polls this November, but the outcome of the election will also play a part in shaping younger voters’ future educational, professional and social statuses.

Most college-age voters either aren’t registered to vote or don’t actually bother to go out and vote at all — and this is a critical mistake. If we allow only the voices of our parents, grandparents and college professors to be heard in this crucial election, we will have to live with the consequences of our silence. However, we can and must make a difference in this election in order to secure the future of our educational pursuits and impending struggles entering the workforce.

Although the most discussed and polarized subjects this election season have included the state of the economy, the national debt and defense, college students should especially have informed opinions in regards to the federal budget for education, especially concerning aid programs like Pell Grants and Stafford Loans. Such programs, which have been expanded under President Barack Obama, make it possible for hundreds of thousands of students across the nation to attend college. However, Obama and Gov. Mitt Romney have different ideas about the costs of education and the paths they lay out for the future are very distinct. The choices that the winning candidate makes in the White House will have an impact on the financial outlook of college students continuing their education and soon-to-be young professionals alike.

Furthermore Obama and Romney have discussed vastly varying attitudes toward dealing with the current economic downturn, especially considering the costs of higher education. The president and his Democratic allies in Congress have increased funding for Pell Grants, reformed Stafford student loans and advocated for higher subsidies to public higher education. Obama has been fighting for these reforms on the campaign trail for the last year. The president and fellow Democrats believe that by investing in two- and four-year-college students and by lowering the cost of attending college, more college graduates can be produced who will be better able to compete in the modern day economy. This will spur the innovation and revitalization the American economy needs to sustain the future generation.

On the other hand, Romney wants to drive down the cost of higher education in the United States by supporting educational institutions that are pursuing innovative ways to reduce costs, rather than increasing government spending on universities across the board. Romney’s plan focuses more on producing college graduates earning more from their salaries after graduation so they will not only be able to repay their loans, but they will also have ample money left over with which to live.

Since education is the future of our generation and all those to follow, it is crucial that the opinions of current students are heard in the upcoming election. The right candidate will ideally help move us to a better-educated and more successful future. But the fate of the presidential race depends on the public being informed and making it to the polls Nov. 6. Regardless of party preference, college students should embrace the opportunity to be a part of shaping the future of the country, realizing that our choice this November will result in real world consequences.

Not too long ago, our university’s very own women’s soccer team upset the No. 5 team in the country Boston College Eagles....
Copyright 2018 Pepperdine Graphic
Back to top