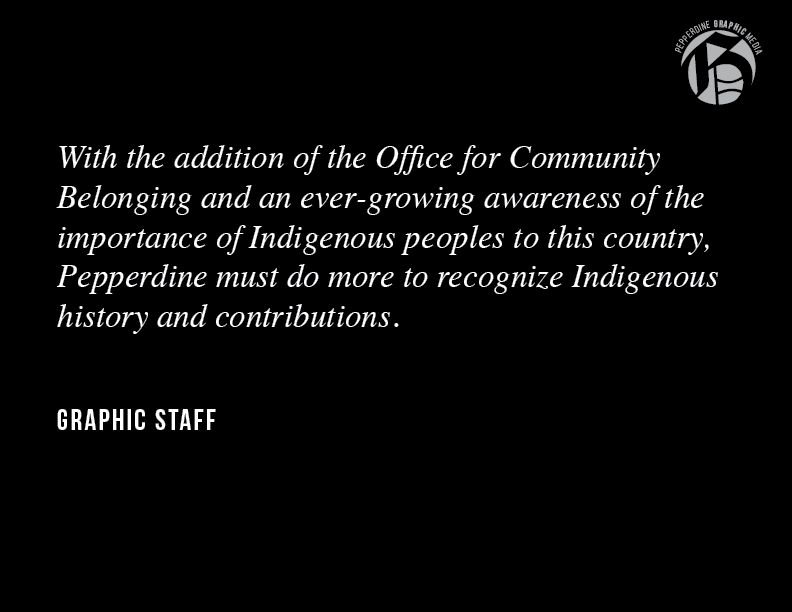 Correction: The article’s art was replaced to correct a misuse of the Santa Ynez Band of Chumash Indians’ official logo.

Pepperdine is built on the land of a people who have been here for over 4,000 years, and it’s time we start recognizing them more.

On Oct. 9, President Biden officially proclaimed Oct. 11, 2021 as Indigenous Peoples’ Day, but he also formally recognized it as Columbus Day, too — both holidays that Pepperdine has rocky histories with.

Thus far, Pepperdine named a small roundabout in honor of the Chumash tribe. After outcry from students, they also removed a statue of Christopher Columbus from the Malibu campus, according to a 2017 article from the Graphic. So, it seems like Pepperdine is trying to recognize the concerns of students and Indigenous peoples.

At the same time, the statue was not fully removed but merely gifted to neighboring Thomas Aquinas College, according to a 2018 press release from the college. In cases like these, Pepperdine sends conflicting messages about whom it should honor for the land it uses.

With the addition of the Office for Community Belonging and an ever-growing awareness of the importance of Indigenous peoples to this country, Pepperdine must do more to recognize Indigenous history and contributions.

The Statue and the Circle

On Pepperdine’s campus, the issue of the Columbus statue came to a head with the removal of the statue in 2017.

In 2015, students protested the statue, arguing it violated the University’s mission, according to the same article from the Graphic. Students said they felt the statue was a symbol of murder, genocide and and that it praised Columbus for essentially stealing land from Native Americans. To this day, a plaque remains in the same spot, denoting, “The Columbus Section Seating.”

To recognize Malibu’s local Indigenous people — the Chumash — Pepperdine named Chumash Circle in their honor. The circle is located near the Drescher apartments, a small roundabout most Pepperdine students are unaware of.

“Honestly, whenever I drive past that street, it actually makes me very angry,” said junior Samantha Wuensche, president of Pepperdine’s Indigenous People’s Club. “Every time I see it, I cringe; it’s such performative activism, it’s disgusting.”

At their greatest population, the Chumash people numbered over 20,000. Today, there are roughly 4,000 people of Chumash descent, according to the LA Times. They inhabited the coast of California, from modern day Malibu to Paso Robles — about 7,000 square miles. Now, most live in Ventura and Santa Barbara counties.

Chumash culture largely centered around the ocean, including fishing and boat making, but they also used caves throughout the coastal mountains to create colorful charcoal paintings. Even the name “Malibu” is derived from the Chumash word “Humaliwo,” which translates, “The surf sounds loudly.”

Most Pepperdine students, and even Malibu residents, are unfamiliar with the impact the Chumash people have had on the Malibu area — this needs to change.

A small roundabout tucked in a rarely visited spot on campus is insufficient for the recognition the Chumash deserve. If Pepperdine wishes to honor the Chumash by renaming a part of its campus after them, it should be a central place constantly used by students, like Alumni Park.

The Chumash people also have a national flag that could easily be flown alongside the American, California state and Pepperdine flags commonly seen on campus. In addition, a mural or painting from the Chumash people should be displayed in Payson Library or somewhere frequently visited by students to serve as a constant visual symbol of the Chumash people and the contributions they have and continue to make.

Since 2019, there’s an Indigenous People’s Club here at Pepperdine with a goal to “come together and immerse themselves within the Indigenous community. By providing enriching events and activities, the club hopes that students will grow in advocacy, inclusion, socialization, and leadership,” according to its statement on The Peppervine.

According to Wuensche, Pepperdine needs more meaningful actions like connecting with the Chumash Tribal Council instead of small performative acts. “Just having guest speakers or literally anything to educate the people on this campus and recognize that Pepperdine this is not their land, I mean this entire country isn’t their land, but Pepperdine specifically is on Chumash territory,” Wuensche said.

The Office for Community Belonging should make a public effort alongside the Indigenous People’s Club to engage with students and organize events that bring an Indigenous presence on campus.

In addition, for over 20 years, the city of Malibu holds an annual Chumash Day Powwow at Malibu Bluffs Park, typically in April. This event is a free, two-day gathering that showcases elements of Chumash art and culture. Pepperdine should encourage students to participate as well as volunteer when possible.

Ultimately, Pepperdine should make a greater effort to recognize and celebrate the people whose land we use and meet on daily.