Staff Editorial: It’s a Great Big World and You Might Be Missing Out 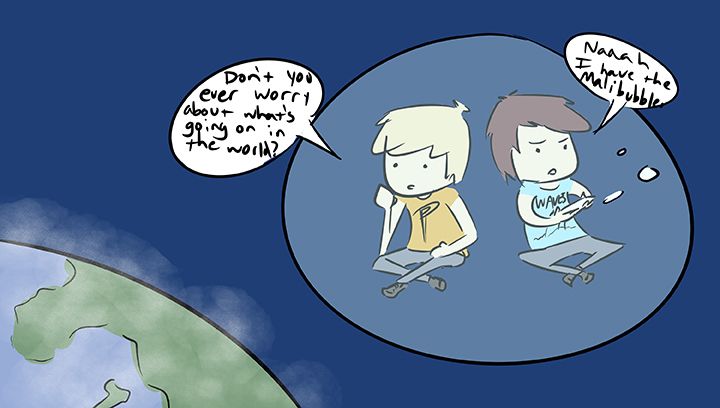 Think of our world as a giant body of water and every event that occurs is a stone cast upon its surface.

Some events are merely grains of sand while others are boulders, but each sends out ripples that cover the entire world in varying degrees of distortion.

Think of yourself and the rest of humanity as buoys resting on the surface of this hypothetical pool; each anchored to a specific part of the world. How sensitive are you to the constant waves being cast across our global community?

World events affect us whether we realize it or not, and it is our human responsibility to know why.

This generation has access to so much more information than any before it.

There are eyes and ears everywhere in the world as well as links to past events that are all only a couple clicks away via the World Wide Web. This abundance of information is an incredible privilege; the wealth of which is in danger of being squandered due to sensory overload.

The world around us is bustling with activity, and we will be affected by it.

We have the ability to know about it and do something about it, yet too often, we accomplish neither.

Media literacy, the ability to access, analyze, evaluate and create media, is a moral responsibility. But do not feel daunted by the immense amount of information because guilt is counter-productive. Social media can sometimes limit your scope of knowledge by catering to specific affiliations and interests, but it can also act as a siphon to funnel news directly to the tips of your fingers.

While staying up-to-date with the news of every nation is virtually impossible. Simply attempting the feat will give you a deeper, richer connection to the world than you might expect. It is easy to become comfortable within the “Malibubble,” but greater truths lie outside.

Sure, Pepperdine International Programs are great, but they are neither necessary nor exclusive to encounter the world beyond the Pacific.

Looking past scantrons and GPAs, true education refers to our ability to engage the world in a meaningful way. This requires context. This requires balance and compassion.

Do not become so distracted by education that you forget to learn.

The opinion of the Graphic staff, illustrated and coupled with the quotes from international students below, follows that in order to be a responsible global citizen, your actions toward knowledge must reflect a deep sympathy for those around the world.

“Although many Egyptians are culturally and politically uneducated, they demonstrated against repressive regimes to assert their rights to “life, freedom and social justice.” More than 30 million Egyptians went out to streets and squares expressing their indignation and dissatisfaction with their president’s performance, claiming that he was not on the right path. The most impressive thing is that these unplanned revolutions were made possible by simple people who had no knowledge about politics or culture; their only desire was for a decent life. Students at Pepperdine should pay attention to the situation in Egypt and in the Middle East in general. The world has become a small village and every single country is affected by other countries’ situations. Also, many students from the Arab world come to Pepperdine and California to study, therefore students here should have an understanding of their political and social movements in order to have fruitful discussions which reflect mutual understanding of such changes. Students should be aware of the changes surrounding them as this contributes to solidifying personalities and individual analysis skills.”

“We live in a globalized culture. As the future generation, we have to be informed about what is going on around the world. What is happening outside America actually influences the system because American businesses feed and even depend on foreign countries’ products. I have noticed that many students are unaware of the location of Ecuador and oblivious to important events that occur there. A lot of raw materials come from my country, such as cocoa, coffee, etc. Right now our president has communistic tendencies and he is limiting the private system of our country, the one that provides jobs and basically maintains the economy. If our president limits that area, it is going to affect Ecuador’s economy, exportation and essentially our relationships with foreign countries.”

“As humans as well as God’s children should help each other out regardless of where we live, who we are, our skin color, gender etc. We should put aside everything that sets us apart and help one another. But before we can give our aid, we must first know our surroundings. In Indonesia, we are famous for Bali, a surfer’s paradise, and California is packed with surf enthusiasts. Indonesia is facing a serious poverty issue and it really is impacting the young children as many of them are not able to afford an education.”

“I would venture to say that Singaporeans know slightly more than Americans about what goes on outside their country, mainly because Singapore is so small that basically everything that happens outside affects us. On one hand, it’s good that it’s so peaceful and nothing ever happens, but that’s kind of like Malibu too. Nothing ever seems to affect Pepperdine and the danger in that is thinking that just because it doesn’t affect us, we shouldn’t do anything about it. Martin Luther King said, “injustice anywhere is a threat to justice everywhere.” I’m sure that Jesus has called us to show love in any capacity to our brothers and sisters around the world.”

“Americans have a bad reputation in Europe for being ignorant of other cultures. This is ironic since most Americans can trace their ancestry to other countries. As a Frenchman I often hear jokes about the French using white flags and surrendering during World War II. While I understand that it is in the spirit of humor, I don’t believe they fully understand the circumstances and it ends up coming across as offensive. The same is true of the understanding of current events in Europe and I often feel lost or misunderstood. I think it’s important for people to explore other cultures and that is one of the reasons I support the international programs.”

“Most Pepperdine students are unaware of what is going on around them. During my journey at Pepperdine I’ve noticed that a lot of people are ignorant about my religion and where I am from. I think it is very important to be aware of what is happening around the world since we live in a global community with all sorts of new technologies that link us together and can build our thinking and appreciation in regards to culture.”

“Growing up in a family that repeatedly moved from one hemisphere of the world to another has never been easy. Living abroad has, however, taught me the importance of international awareness. Expanding my knowledge and interest in international news has encouraged me to be more culturally sensitive and accepting of diversity wherever I may be traveling or living. Having a general knowledge of international issues has also enhanced my abroad experience as I am more likely to have a mentality that is focused on understanding the political and social situation and problems affecting the country. Everything that happens outside our hometowns affects us in some way or another, so we should take a little extra time to educate ourselves about world events.”

“I believe California is one of those places on Earth that has a stable ecological, political and economical situation compared to many other places. Of course, there are things to work on to make California a better place, but here in California we don’t have much to worry about like what to eat, whether we have a water to drink or if it is safe for us to stay in our homes. However, we need to pay attention to what is going on around us on other continents because even though we may not be directly affected by any of those situations, it could affect us in the long run.” 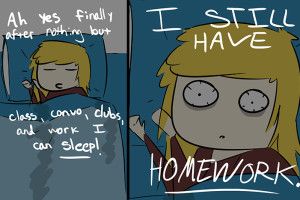