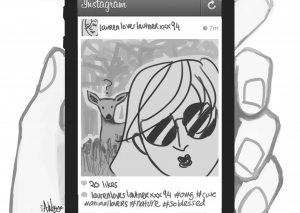 For those of you who have failed to notice, Pepperdine is no typical college campus. It is actually an idyllic paradise built into the side of a hill and overlooking the Pacific Ocean. With this inevitably comes the burdens unique to living in a Disney-esque wonderland, burdens that students of more urban universities will never understand. Among these is the burden of sharing living space with all manner of ridiculously cute and demure wildlife.

Generally speaking, reactions that accompany the fact that there are actual baby deer frolicking in green fields, ducks splashing in ponds and rabbits leaping among shrubbery seem to be positive and uplifting. This is mostly just judging from the Instagrammed visions of natural beauty. Also, the word “blessed” and variances thereof are hashtagged with wild abandon.

But let’s come down to reality for a second and remember that sharing a campus with these creatures requires human cooperation — more than just the aesthetic enjoyment of baby animals. And so, we’re going to take you through a brief run-down of things to avoid, in observance of the animals with which we cohabitate. Do NOT:

No. 1: Leave food out for the deer on the side of the road.

We can only assume this act is being carried out in hopes of befriending a family of deer via displays of kindness and benefaction. We are going to go ahead and dash that dream: The deer will never be your friends. Also, they do not need to be fed by humans. Unlike people, deer are not a co-dependent species that needs to be supplied with food. They are probably fairly accustomed to fending for themselves.

No. 2: Stop in the middle of Seaver Drive to take pictures of the deer.

This is only vaguely acceptable if you are a tourist — not a tourist to Malibu, a tourist to the planet Earth, witnessing greenery and sunshine and furry animals for the very first time. If this is the case, then by all means, stop wherever you please and take copious pictures of everything you see. Document the hell out of that monumental, world-altering experience. Watch the deer with wide-eyed wonderment as they make their way down the hillside, their majestic and graceful forms silhouetted against the sunset. Take it all in. Drown out the sounds of that line of cars impatiently honking behind you by imagining choirs of angels instead.

This is the single exception to the rule. If the above does not apply to you, please resign yourself to simply googling pictures of deer. You could even post them to Facebook and say that you took them — no one will care. If anything, they will thank you for not bounding in front of their moving car with your iPhone.

They all look exactly the same. And they certainly don’t know your name.

No. 4: Speed recklessly through campus.

Deer are not very bright. As a result, they have been known to spastically throw themselves in front of cars from time to time. Try to be aware of this deficiency on their part by doing your part not to bulldoze them over with your car at 60 miles per hour. Not only could you save a deer’s life, but you could prevent your own car from being totaled. Everyone is a winner.

Also — and we hope this goes without saying — there are people crossing the street. Maybe that should be your primary motivation for not driving like a crazy person.

How do you show your spirit? To show my Wave spirit, I just show up. That’s 95 per- cent of the equation — filling...
Copyright 2013 Jupiter Premium Magazine Theme
Back to top