Staff editorial: AKB not to blame for son’s actions 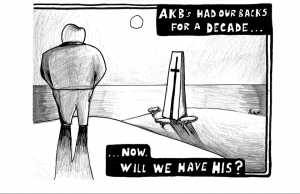 Though justifiable in some respects, many of the negative reactions seem misplaced, as it is important to recognize Christopher and the university as mutually exclusive entities. We, as staff, students and members of the Pepperdine family, must do our best to understand the Benton family’s current situation with the information available to us.

Here is what we do know:

Christopher Benton came to campus on Thursday, Aug. 23 with a loaded gun. He was arrested in the Thornton Administrative Center not long after his arrival on campus.

Christopher was previously involved in the case surrounding the death of 25-year-old Katie Wilkins in April, who was found in her parents’ garage on West Moon Shadows Drive on the evening of April 28. Christopher was the last person to be seen with her before her death; however, he was never officially charged in the investigation.

President Benton released a statement shortly after his son’s arrest affirming his son’s past and current problems with drugs as well as his concurrence to involve law enforcement concerning the situation with his son. Below is a portion of his statement to the students, staff and administration of the university:

“For about 14 years Debby and I have dealt with issues emerging from the presence of drugs in the life of our son, Chris, and those with whom he has chosen to associate. For the most part, this issue has been kept private, as we have tried a number of treatment methods. We have not given up, but we have not been successful…. Chris will not be returning to campus for some time, probably a long time. All parties involved — the Court, the District Attorney, University leaders tasked with assuring campus safety, as well as his mother and I — agree with this decision.”

Although Christopher’s drug problems were not kept secret, they were not openly disclosed to the student body. This is understandable given that President Benton, the most visible member of a high profile university such as Pepperdine, had to consider the best interests of both the university and his own family. This was, after all, a particularly sensitive family matter that, in most cases, would be entirely unrelated to campus life — the fact that the president is required to live on campus complicates the matter as his son’s actions became a part of the university simply because of location.

Of course, this is no excuse when the safety of the Pepperdine community is placed in jeopardy as a result but, at the same time, these were the voluntary actions of the Benton’s adult son whose affiliation with the university begins and ends with his family ties. The Benton family has remained consistent in their vision for members of the university community in that they too agree with idea that Christopher should be held accountable for his own actions in the same way that any university member would be held accountable for his or hers.

As controversial as the situation may be, it is important for we as active members of the Pepperdine community to remember what makes our community so strong, namely, that we are able to lend support and understanding in times of hardhsip to all who seek it. While President Benton and his family are in a unique position as leaders of our university, we must also acknowledge and respect their personhood, and the idea that this is an unfotunate situation for all parties involved.

A factual assessment of the recent happenings with Christopher Benton affirms that the anger felt by the Pepperdine community is warranted. It also affirms that Benton was as transparent as possible regarding the entire situation. Judgment should be passed not on the President or the university, but simply on the grown individual who made a conscious effort to carry out the actions resulting in his arrest on Aug. 23.

For freshman sports medicine major Tori Vollmer, sports is not just part of her academic curriculum — it has always been...
Copyright 2013 Jupiter Premium Magazine Theme
Back to top