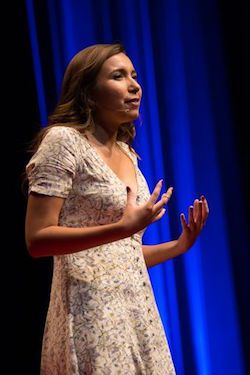 Sophomore Isabella Ordaz took the stage at the TEDx event in Livermoore, California on June 24th to reflect on her experiences growing up as an ethnic minority in the Bay Area.

Ordaz, the second to last speaker of the day, opened her talk relaying her experience of being called into the principal’s office after a commentary she wrote on the racism she experienced in school aired on a local radio station. She went on to propose a model of “beloved community” in the classroom.

The organizer of the event sent Ordaz a Facebook message asking her to speak after hearing Ordaz’s commentary on the radio show.

“It happened to be that the one time that it aired she was in her car listening to it,” Ordaz said. “She jotted my name down, and the spring semester of my freshman year she sent me a Facebook message and asked me if I’d be interested in the opportunity.”

Branching off an assignment from her COM 180 class, Ordaz began writing her speech in June after returning from a month in Buenos Aires.

“We were asked to write a reflective essay about an experience in our life, and I happened to write about that same experience, so that was like my big rough draft of the speech essentially,” Ordaz said. “I worked through more ideas over the summer, and I wrote it all out. I was working with a speech coach TED assigned us over the phone.”

Not relying solely on her own experiences, Ordaz researched to add to her speech.

“I did sight a lot of research and a lot of ideas and theorizers in that speech and that required a lot of reading and a lot of listening to lectures on YouTube that I had reviewed before writing the speech,” Ordaz said. “I had been looking through all that literature and engaging with all those perspectives for a while.”

Ordaz spoke to an audience of approximately 100-200 listeners, a crowd that had dwindled down as the day wore on.

After the event Ordaz was hesitant to share her speech online.

“It was really funny because the video had been released two days before I posted it on Facebook and I was hesitant to post it on Facebook because when it first got posted, it had seven dislikes and zero likes,” Ordaz said.

“That was all my feedback initially, and that kind of paralyzed me for a little bit and it made me reevaluate my message, but I ultimately shared it, and it was fine,” Ordaz said.

Sharing her experiences did not always come easy for Ordaz.

“Part of the training [at the radio station] was to create a commentary on something in our life, a perspective or opinion that we had,” Ordaz said. “I wasn’t sure what I wanted to write about and the woman who was my mentor at that station encouraged me to write about that experience because it stood out to her. I started crying when I was writing the piece. I didn’t want to talk about it. It brought up a lot of emotions. It was really hard for me to get it out the first time. I was encouraged to write that story again and again.”

While Ordaz has no current plans for future speaking events, she hopes to involve the campus in a discussion on inclusiveness and diversity.

“I’m working with the Latino Student Association on reestablishing the club and allowing it to foster a more inclusive campus and provide space for people of more diverse backgrounds,” Ordaz said. “I’m a senator on SGA, and I’m an intern for the Intercultural Affairs Office. A lot of what I’m doing is planning and providing space and action. I’m more about the action than getting in front of people and talking.”