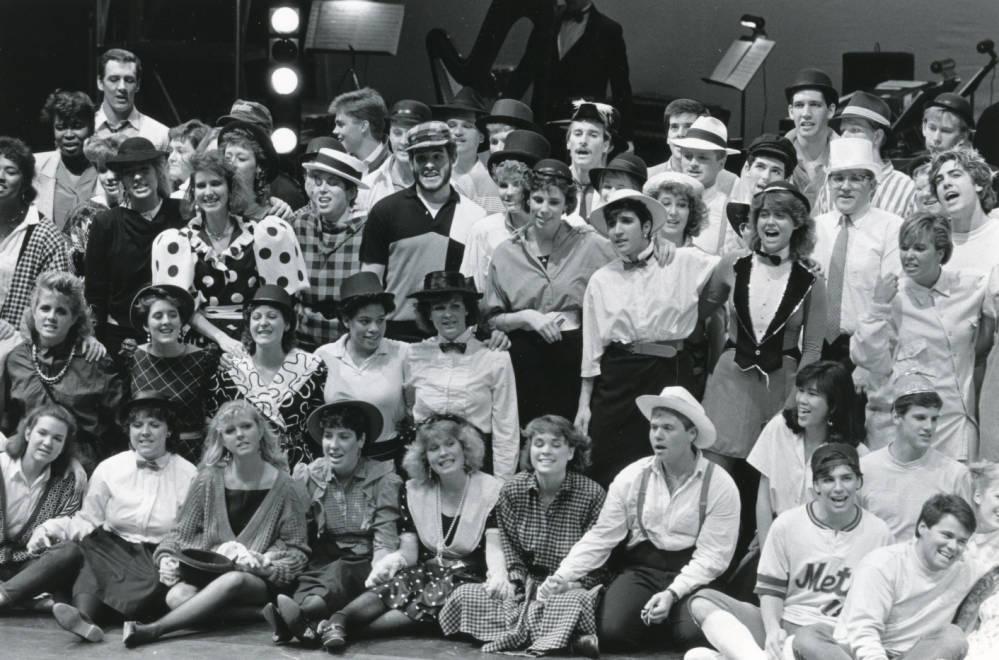 A student group poses after their performance in this undated photo of Songfest. Songfest dates back to 1973 and has taken place each year until 2020, when COVID-19 disrupted the show. Photo courtesy of the Pepperdine Library

Songfest is the oldest tradition at Pepperdine, and this year, it’s not a guarantee.

Following a Student Affairs restructuring in May, the University has not yet shared plans for the musical event. Student leaders said they’re not ready to abandon the tradition but lack key information as the show draws closer.

“I’m sure there are people working at Pepperdine and attending Pepperdine who have no idea that Songfest is even sort of in jeopardy at the moment,” former Songfest Director Sam Parmelee said. “It would be a real shame for it to be gone before there was even really an awareness of it or conversation about it.”

The event is a singing, dancing, acting whirlwind of a competition in which each group gets 12 minutes to perform. Surprise celebrity judges evaluate the competition each year and the winner walks away with the Sweepstakes Award.

“We are hesitant to end this long-held, much-loved tradition completely,” wrote Connie Horton, vice president for Student Affairs, in a Nov. 15 email to the Graphic. “However, interest (gauged by participants and audience) has been steadily declining as new traditions have emerged. We are exploring a potential new model for Song Fest [sic].”

Starting in August, organizers work with student leaders to arrange music, hold auditions for Songfest hosts, and by Thanksgiving, the event would have musical arrangements for groups to sing through.

This year is missing all of those elements, Stivers said.

“We don’t have groups, as far as I know,” Stivers said. “We don’t have shows written. We don’t have hosts selected. So that’s why I say it’s unlikely that, if there is a Songfest next term, it’ll be like what we have done before.”

The biggest change this year — the lack of a Songfest director.

In May, the University let go of Parmelee, who has produced Songfest shows since 2001. Since his layoff, there has been no communication to the general University community regarding the future of Songfest.

This year would be the 50th Songfest, and Lauren Whittington, senior director of Songfest group Eta Theta Tau (HOT), said the group wants the show to go on.

“We want to make this happen, but we haven’t been told a ton of stuff,” Whittington said.

Pepperdine hasn’t had a traditional Songfest since 2019 due to COVID-19 campus closures, leaving the memory at risk as well.

“Right now, because we haven’t had Songfest for two years, we’re about to lose memory of Songfest within our current student body,” Stivers said. “So I don’t know that most of our students at Pepperdine now would even know what it is that they’re missing. And that makes me truly sad that there aren’t others in senior management at Pepperdine who see this as a huge loss.”

Parmelee echoed Stivers’ thoughts — Songfest is unique at Pepperdine because Seaver has so few traditions that have spanned this long and remained the same.

“I mean, name one other thing that’s been going for 50 years that students regularly do,” Parmelee said. “What’s crazy about Songfest is it’s one of the only things we do where the way somebody did it 30 years ago, and what their experience was doing it, actually matches the current students.”

HOT conducted its own virtual show for 2021 without much help from the University, Stivers said. But the pre-recorded format lacked the elements students remember — late-night rehearsals, working with an 18-piece band and the same ending number every year: singing, “Let There Be Peace on Earth” with Songfest alumni.

“We’re hopeful about the spirit of Songfest,” Whittington said.