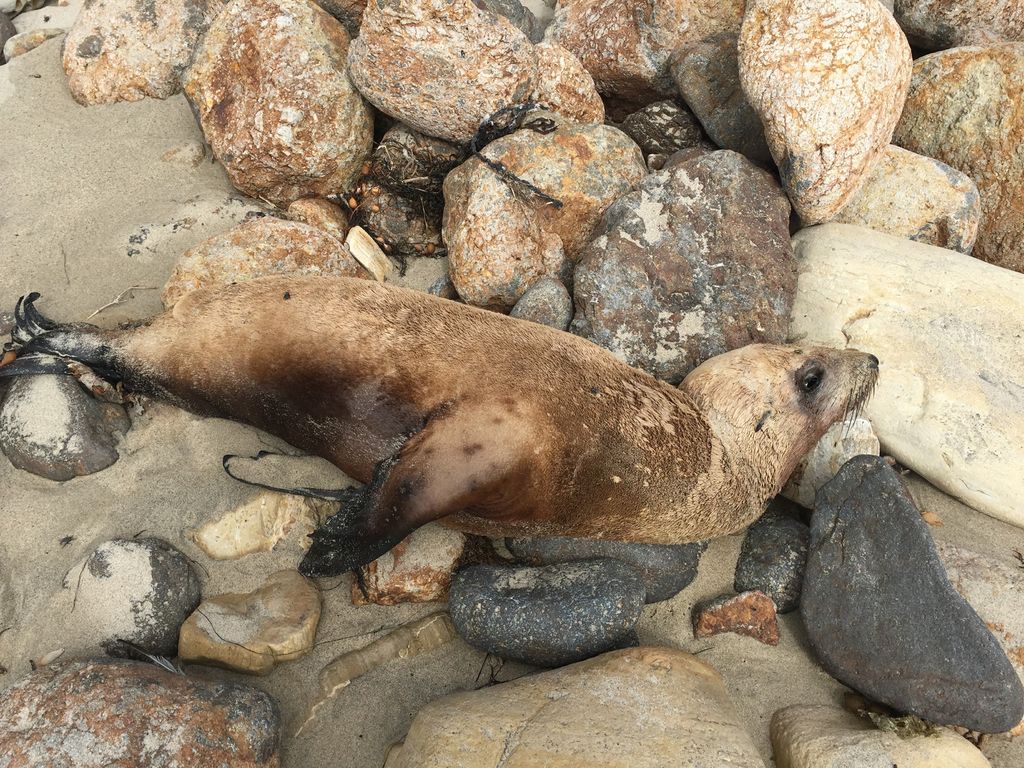 A walk on Point Dume’s beach recently resembles a graveyard of washed-up sea life. On the stretch of the Pacific Coast between Little Dume and Westward Beach, one finds a surplus of dead sea lions, tuna crabs and crows littered on the sand, a defunctive and rotten smell permeating the sea air.

It’s the fourth year in a row that there have been mass landings of California sea lion pups in Malibu, according to the California Wildlife Center of the Marine Mammal Department. Since the government declared the issue an Unusual Mortality Event (UME) in 2013, stranded sea lions have become a regular sight for those who frequent Point Dume, as beach-goers stretch their towels yards away from the rotting corpses.

“This has been a coast-wide problem for the past four years,” Seasonal Assistant Marine Coordinator Colleen Weiler said. “Every rehab center in California is kind of stretched to the limit.”

Weiler said causes behind the sea lion deaths include El Niño and climate change, though a possible algae bloom may also be to blame. She said this year the numbers are high, but last year was particularly bad. Pepperdine Professor of Biology Karen Martin, who helped found the Beach Ecology Coalition in 2004, also said El Niño is one of the leading culprits for the stranded sea lions.

“Usually an El Niño event is a short period of events where the water current reverses,” Marin said. “Instead of coming from the north to the south, which is cold water coming down, it goes from the south to the north, so it is warm water coming up. It’s an actual change in current water flow on the side of the ocean, not just a change in temperature.”

Due to the reverse of the currents, Martin says there have been some unusual fish in the water, such as a sea snake that washed up on the beach in Ventura. This also explains why some parts of Malibu beaches are covered with dead tuna crabs, which — native to Baja, Mexico — have moved north with the warm water. 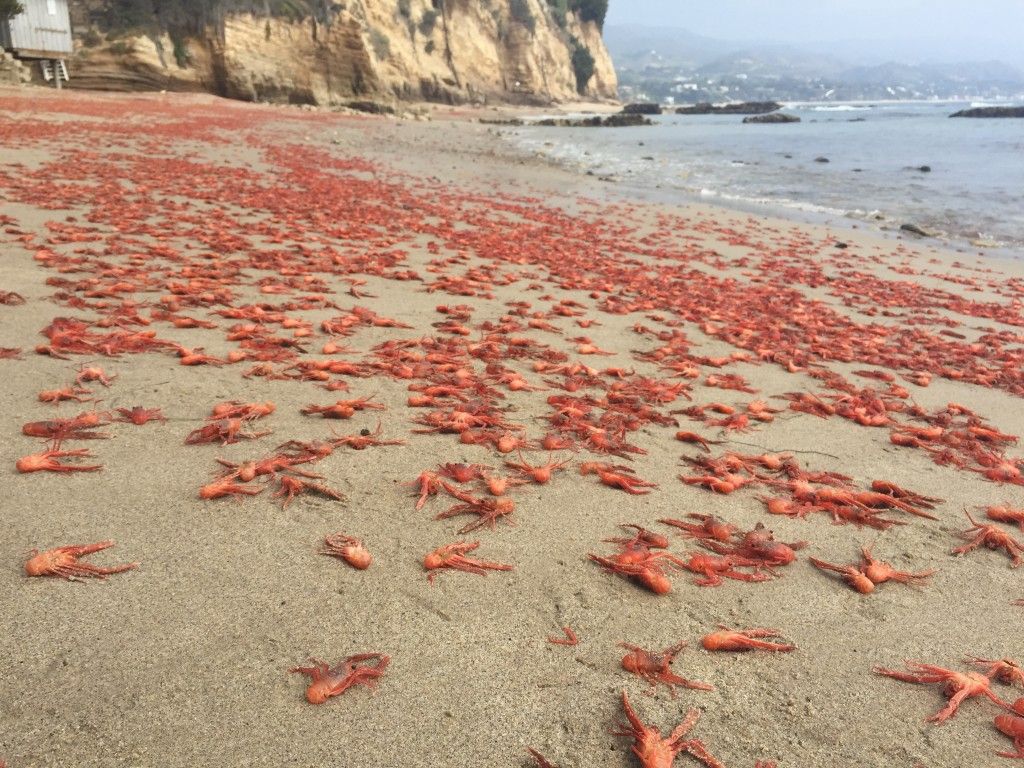 “The El Niño event is global,” Martin said. “It’s a Pacific Ocean event. In Australia, they’re seeing a lot of coral bleaching, which is temperature-related as well. So that’s a big concern.”

One of the most concerning side effects are the sea lion pups, which Weiler described as “really skinny, emaciated and dehydrated” due to a food shortage in the water. While pups should be around 40 pounds, the ones that have been rescued weigh closer to 25 pounds.

“The water has been warmer than normal, which pushes the fish they should be eating really far offshore and deep in the water columns,” Weiler said. “So the little pups physically can’t swim that far and get the fish. The mothers have to swim farther off shore to feed themselves, so they aren’t spending as much time with their pups as they normally would be.” 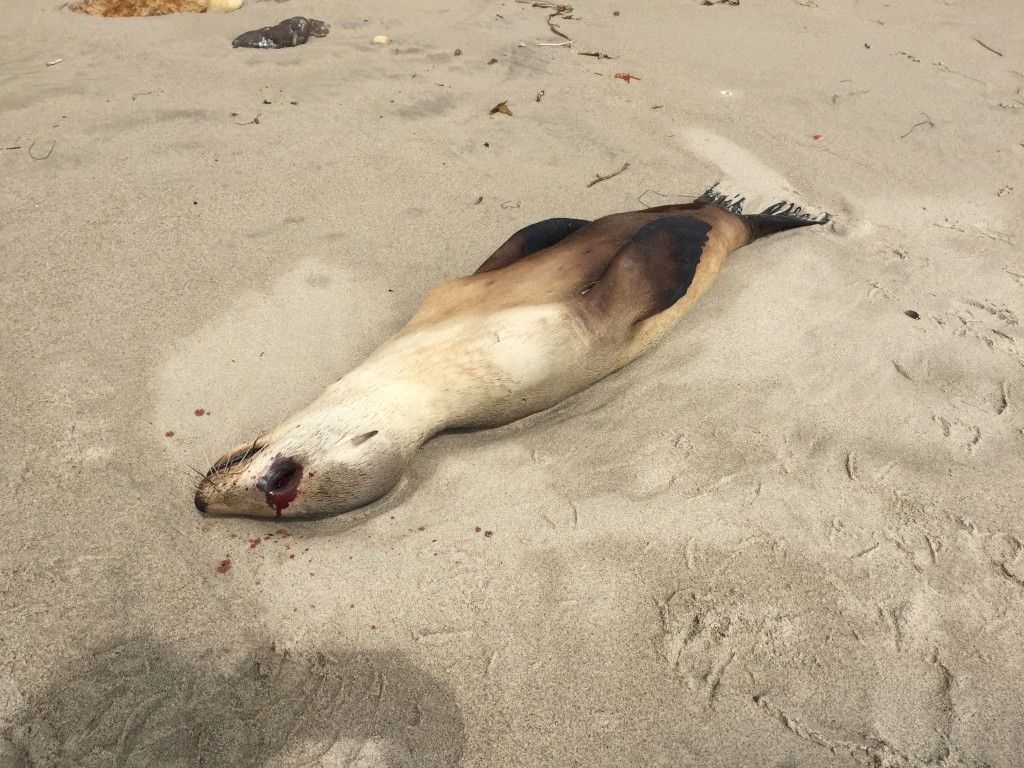 Additionally, there is added competition for food, as Martin said the area has a higher-than-usual sea lion population.

“I think the evidence is that the other species are already being affected [and] that the numbers of fish are lower that they are trying to eat,” Martin said. “[Point Dume] is where [sea lions] congregate. The sea lions can go swimming wherever they want, but they go to rocky places to haul out.” 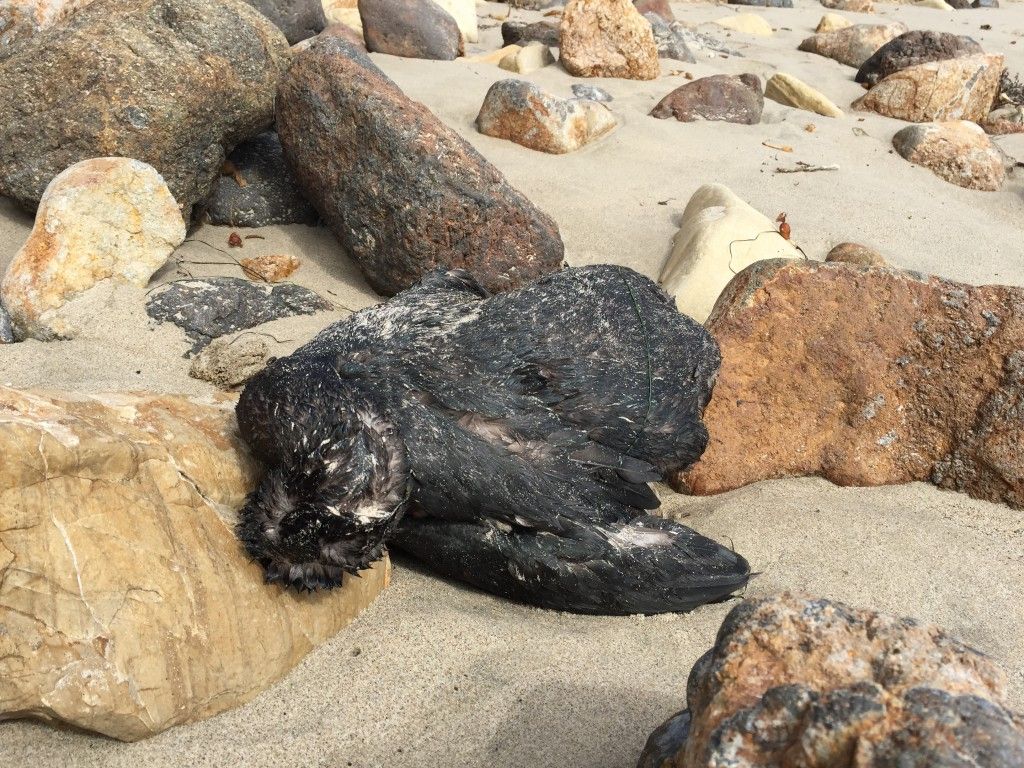 “We have no idea what their normal population is, because this group of sea lions has not been studied before, and this location has not been looked at,” Palmeri said. “I think we’re the first group to check data on the [sea lions] residing there.”

Twice a week, the four students visit Point Dume to study the habits of sea lions for their Behavioral Ecology class, focusing on human interaction with the species. Palmeri said the group works to advocate more beach management and signage about the sea lions to educate the passersby. During one of their visits, for example, Palmeri said she spotted a beach-goer taking a selfie with a sea lion.

“There’s no signage or anything,” Palmeri said. “People rock climb in the area, and it’s a very popular site. There’s a sign on the other side of Point Dume that talks about the tide pools, but that’s it.”

In fact, no one is allowed to be within 100 feet of a sea lion under the Marine Mammal Protection Act. Martin said that unlike beached dolphins or whales, sea lions can do just fine out of the water.

“A lot of people have this connection that since it came from the water … it must need to be wet or go back in,” Weiler said. “So they will try to pour water on it or put it back into the ocean, and that’s the last thing we want to do for these pups that have no body fat.”

Instead of trying to interact with the sea lions, Weiler recommends calling the WIldlife Center if someone finds a sea lion on the beach. 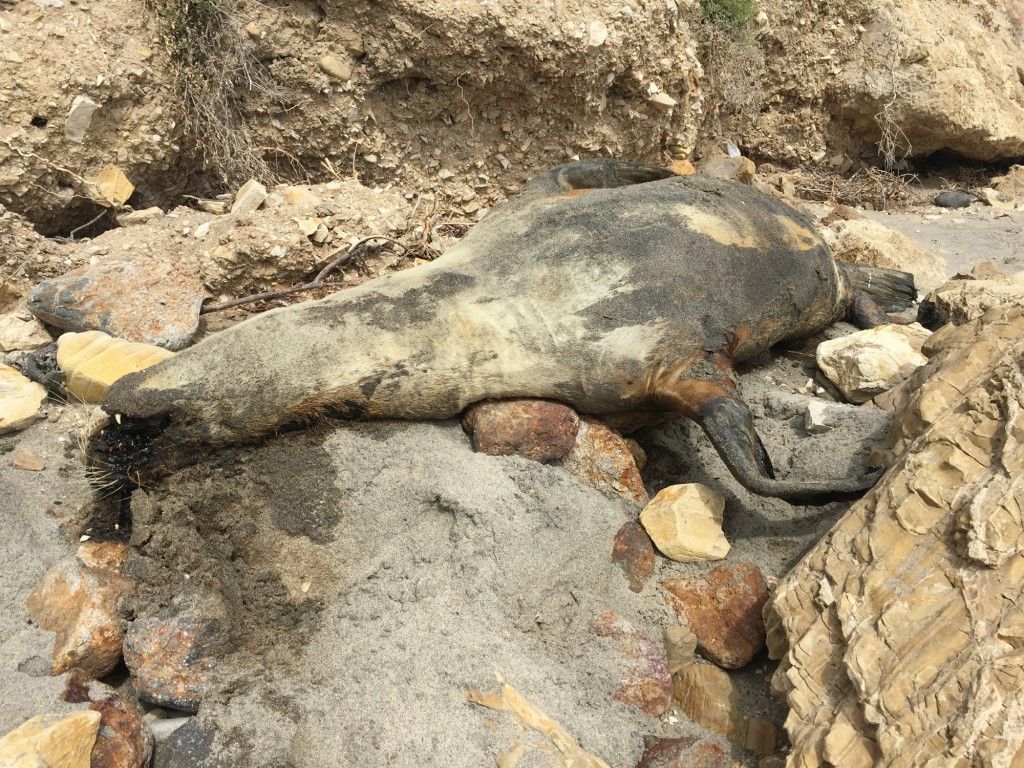 “If they are out of the water, they need to get rest and stay warm, so we definitely recommend that they don’t disturb and harass them,” Weiler said. “Having a lot of people around can stress them out and they are already so sick, so that is obviously really bad for them. It’s something that you wouldn’t know unless you look it up. People don’t realize that the best way to help them is to give it a lot of space.”

“It’s face looked like a puppy dog,” Lammerding said. “There were other people there giving it food. They cracked open oysters and tried to feed it to the [sea lion]. I moved the food away because it looked like the [sea lion] was irritated by it.”

Currently, the Wildlife Center through Malibu Canyon is at full capacity for sea lion rehabilitation. Weiler, who works in the Marine Mammal Department with three full-time staff members and one other seasonal staff member, said they can take roughly 25 sea lions at a time. However, they are looking to relocate to a larger location to take in more animals once they have done enough fundraising. 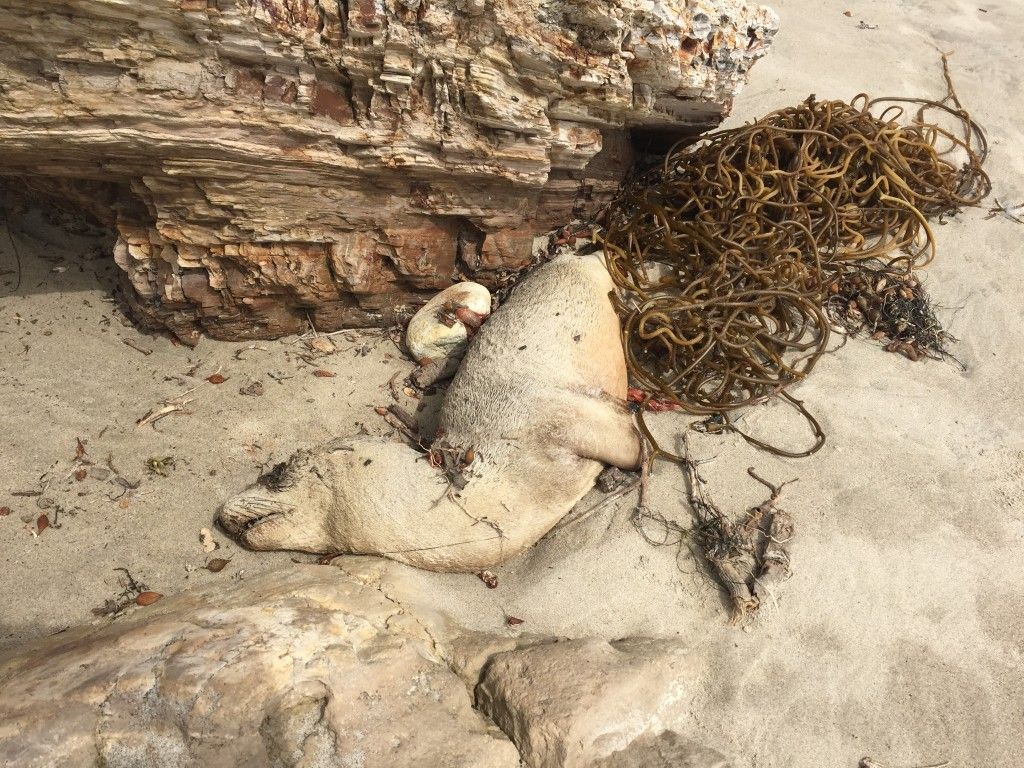 In the meantime, she recommends recycling, cutting down on waste and reducing one’s carbon footprint, as the problem is due to the climate change.

“You go to the beach and see trash, pick up trash,” Weiler said. “You can help the center directly by donating or having a fundraiser. We always need just stuff for the day-to-day, like bleach or soap or towels.”

While she said it’s mostly a fun job and that she loves working with “the little guys,” the situation is frustrating for Weiler as there is no easy fix or solution.

“It’s definitely tough when we can’t do anything to help,” Weiler said. “We don’t know if it’s going to go back to normal next year, or if this is the new normal.”