Soccer Scores Back to Back 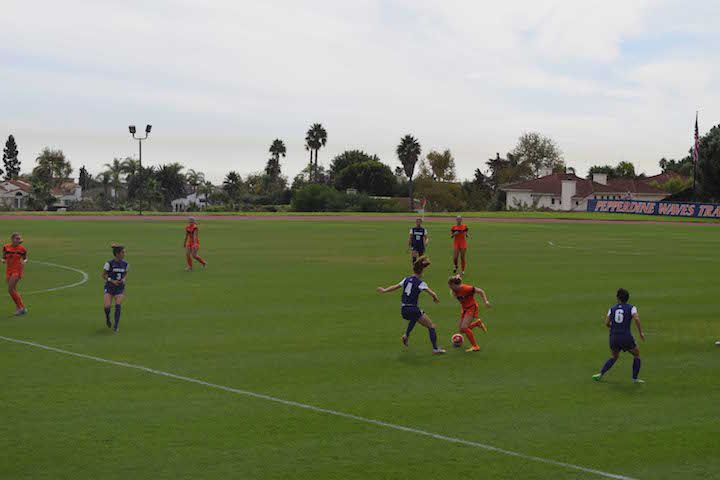 Six wins, six losses, two draws and fear that the postseason might not be happening for Pepperdine’s women’s soccer team—that is how the past weekend started for the Waves. But if things started out tense, they certainly didn’t end that way.

A 4-0 thrashing over Gonzaga on Friday and a 1-0 dramatic overtime win against Portland on Sunday showed the fans what a high-caliber NCAA Division I team like Pepperdine should be doing: winning.

“This weekend’s results are a true testament to the abilities of this team. We started to find the back of the net, which I think gave us some confidence and self belief,” junior goalkeeper Hannah Seabert said. “The two wins give us some good momentum going into the last few games of the season.”

It’s been a while since the Waves scored more than one goal in a match. The last time they did so was in a 2-2 draw against top-ranked Virginia in September. And even then, the fluid, beautiful game you’d expect from the Waves just wasn’t there.

Well, the 4-0 beating put an end to the goal-scoring drought in an exhibition of nothing-but-high-quality football. Freshman attacking-midfielder Christina Settles started the show. She picked up a poor clearance from Gonzaga in the 14th minute, dribbled into the inside of the box and snuck home a beautiful cross shot in the bottom corner. 1-0 Waves.

Based on how difficult scoring has been in the past few games, you’d expect that 1-0 would be the final score. Well, you’d be wrong. Just before halftime, freshman attacking-midfielder Hailey Harbison got on the end of a beautiful long pass from senior defender Courtney Assumma and chipped the ball past the Gonzaga keeper to put Pepperdine ahead at 2-0.

Sophomore Bri Visalli — one of the stars of Pepperdine’s campaign so far — put 3-0 on the scoreboard just three minutes into the second half. Harbison, putting together an all-around stellar performance, beat the Gonzaga keeper on the end line and set up Visalli for the third goal with a short pass into the box.

Gonzaga ventured forward and forced junior goalkeeper Hannah Seabert to make a top-class save in the 71st minute, barely getting a hand on it to send the shot wide. But any Gonzaga threat didn’t go any further than that.

If Settles started the show, then by all means she should end it as well. And she did. Beautifully. Feeding off a pass from junior forward Taylor Alvarado, the first-year midfielder dribbled past a Gonzaga defender and blasted home a shot in the bottom left corner. 4-0 on the scoreboard, and the seventh win of the season.

Two days later, on Sunday, came the thrilling 1-0 win over Gonzaga. At least on paper — and on the field — Pepperdine looked the better side. The Waves accumulated a total of 17 shots on goal against just four from Portland, but getting the ball to the back of the net, as seen numerous times this season, appears to be a struggle.

Freshman forward Michelle Maemone had a pair of solid goal scoring opportunities, but saw one of her shots get swept off the line by a Gonzaga defender and the other go off the crossbar early in the second half. Junior midfielder Meghan Schoen also came close to scoring, but saw her shot go inches away from the framework in the 77th minute.

It was senior day — Courtney Assuma, Oksana Nicholis and Amanda LeCave were all honored before the match – but it was a sophomore that ended up making the difference. As the match seemed to be headed for a draw, Visalli got on the end of a poor clearance from the Gonzaga backline, carried the ball towards the inside of the box and fired home the winning goal in the 100th minute, just 15 seconds shy of the end of the first period of overtime.

In the last home game of the season, there couldn’t have been a sweeter way to seal Pepperdine’s eighth win, with the Waves amounting for a 8-6-2 record so far.

“These games finally revealed how hard we’ve worked all season and it is awesome that we have finally found the back of the net,” said Visalli, who is now Pepperdine’s top-scorer in the season with four goals. “Working hard for our seniors is what really makes Sunday’s victory so sweet.”

Coming up, the Waves will make the trip to Utah where they face BYU today at 6 p.m. They return to California on Saturday, when they face San Diego away from home.

Waves Fall to Cougars and Toreros, but Stay Strong 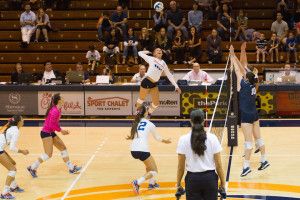 Waves Fall to Cougars and Toreros, but Stay Strong