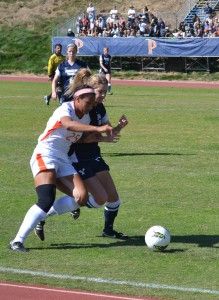 The women’s soccer team has finished the regular season with an overall 12-6-0 record, winning five out of eight conference games in 2012.

The Waves were coming off of a 2011 WCC Championship win, and continued their success throughout this season. They scored an average of 1.85 goals per game and outscored opponents 37-25.

Other highlights from the season include the Waves 1-0 upset of No. 5 Boston College Sept. 29, a 1-0 double overtime win at Dartmouth Oct. 1, the 1-0 shutout of Gonzaga Oct. 28 and senior goalkeeper Roxanne Barker’s receiving the Player of the Week award on Oct. 15.

“It’s tough enough to be a successful Division I student-athlete, but to do so while maintaining academic excellence is a testament to their intelligence and strength of character,” Head Coach Tim Ward told pepperdinesports.com.

The Waves look to carry this strength into the first round of the NCAA playoffs, taking on No. 23 Cal on Nov. 10 in Malibu. It is the Waves’ second consecutive postseason appearance and their seventh overall.