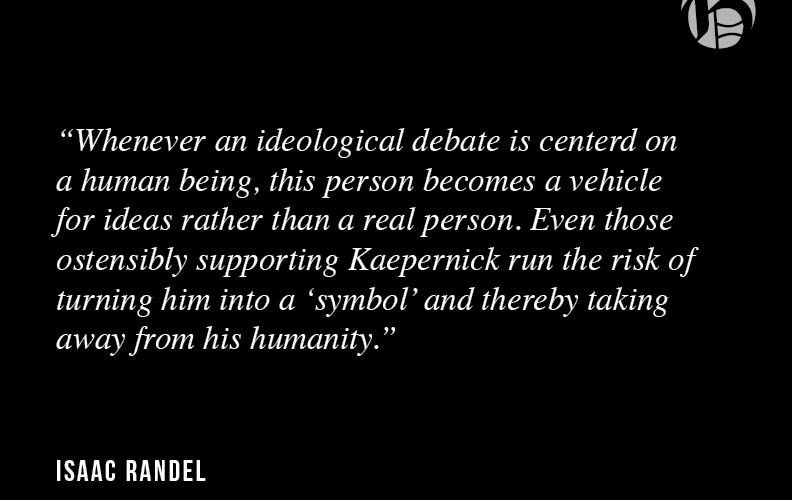 Outside of the Super Bowl, I don’t watch professional football, and I’m certainly not familiar with many players’ names. Recently, however, I’ve found it impossible to avoid one name in particular: Colin Kaepernick, quarterback for the 49ers.

After refusing to stand for the national anthem during a preseason game against the Green Bay Packers on Aug. 26, Kaepernick has attracted national coverage. The act, he told interviewers, was a protest against the “[oppression of] black people and people of color” in the United States.

Commentary on the protest has appeared in such varied sources as Business Insider, The Atlantic and Al Jazeera, and has attracted attention from figures no less formidable than the President of the United States.

This sudden publicity has the adverse effect of eliciting strong opinions –– positive and negative –– about Kaepernick’s character from people who previously knew nothing about the man.

Unsurprisingly, there have been accusations of disrespect for veterans, unpatriotic contempt for his country and perhaps more unusually, a suggestion made by television host Sean Hannity that Kaepernick converted to Islam. Conversely, there has been wide support for Kaepernick’s outspokenness, but the coverage shares one major characteristic: it isolates his human identity within his act of protest.

Many, like myself, who were unfamiliar with Colin Kaepernick until recently, have found ourselves forced into showing one of two responses: outrage or support for Kaepernick himself. Neither can be truly authentic or meaningful. I can superficially condemn the idea of an American “disrespecting” his flag, or support the idea of an American “standing up” to racial injustice, but cannot offer any judgment of Kaepernick’s character, motivation or justification if I know nothing about him outside this one action.

Such judgments aren’t only superficial, but dehumanizing as well. Whenever an ideological debate is centered on a human being, this person becomes a vehicle for ideas rather than a real person. Even those ostensibly supporting Kaepernick run the risk of turning him into a “symbol” and thereby taking away from his humanity.

For those of us whose first introduction to Kaepernick is the controversy surrounding him, it makes sense to refrain from overeager personal attacks or praises, at least until we have a fuller understanding of the man himself. 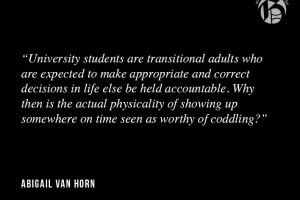 Graphic by Nate BartonTo me, syllabus day is important for two reasons. First is to claim a territorial dibs on whatever...
Copyright 2018 Pepperdine Graphic
Back to top