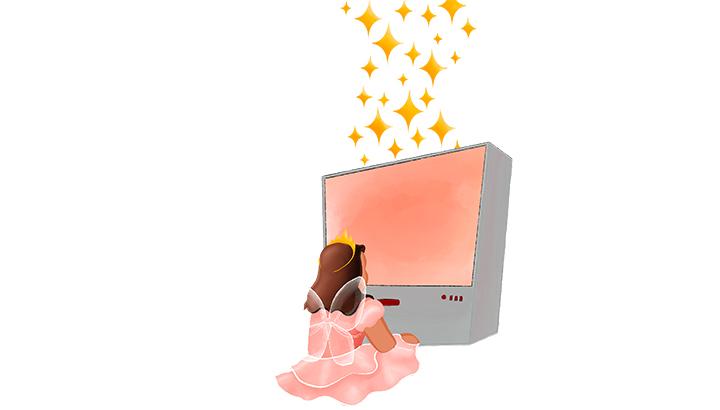 In a world where girls have historically been limited in opportunities, diverse and powerful female characters serve as much needed role models.

As a child, senior English major Anemone Hansen felt most drawn to storylines with strong female leads who were confident in themselves despite not adhering to traditional gender roles or expectations.

“She’s the funny one; she’s the main character,” Hansen said about Lucy Ricardo from “I Love Lucy.” Lucy was a rarity, especially in the ’50s, when strong women weren’t usually included in the picture. Hansen felt disconnected from media in which women only served underdeveloped supporting roles.

Books, TV shows and movies influence children at a young age. They shape how young people see themselves and who they want to become, but those options seem limited when girls can’t find themselves in the narrative.

“I remember reading ‘Treasure Island’ when I was little,” Hansen said. “I hated it because the only female character is the mom, and she’s this scaredy-cat lady.”

Hansen said she enjoyed reading “Anne of Green Gables” and “A Wrinkle in Time” because of confident protagonists Anne and Meg, respectively. Other students recalled loving series such as “Pippi Longstocking” and “Junie B. Jones” as well as novels such as “The Secret Garden,” all of which also feature independent female characters. Female authors crafted each one of these rebellious young girls.

Despite what one might assume, the representation of male and female characters in children’s books has not become more equal over time, according to a 2011 Florida University study. The fewest female characters appeared between the 1930s and 1970s. For each year between 1900 and 2000, less than one-third of children’s books published included female adults or animals as central characters. Similarly, women comprised only 33% of movie characters worldwide and spoke half as much as male characters, according to a 2019 study by the Geena Davis Institute on Gender in Media.

“I definitely was attracted to watching more shows and reading more books where the characters — main characters — were girls,” Cho said. “But especially what was important to me — what was exciting me — was when I saw characters who were Asian or people who looked like me in stories.”

Cho recalled one time in particular when she was excited to find a new book about a girl who looked like her.

“I don’t even remember what the book was called, but the cover had an Asian girl on it,” Cho said. “And then I read the back and it was about a Korean girl, and I’m Korean, so I was like, ‘Oh my God, I really want to read this book.'”

Multimedia platform Disney Junior currently features ethnically diverse and empowered female leads in animated television shows “Doc McStuffins,” “Elena of Avalor” and the new “Mira Royal Detective” for preschool audiences. An LA Times article also points out the rise of the ‘Latina genius’ protagonist in shows like “One Day at a Time,” “On My Block,” “The Expanding Universe of Ashley Garcia” and “Diary of a Future President.”

“I had brown hair as a child, and in my mind, all princesses had blonde hair,” Harriger said. “So I didn’t feel like I could be a princess because I didn’t have blonde hair.”

Harriger said while she thinks Disney and other companies are creating more diverse characters regarding hair and skin color, the majority of female characters still conform to traditional beauty standards.

“What we found was that the messages about appearance for females had not changed; it was pretty consistent,” Harriger said.

Across live action and animation, Harriger said protagonists are more likely to be thin and stereotypically pretty because positive personality characteristics tend to be associated with the best looking characters. Animation especially features unrealistic body types, and women who do not fit the narrow beauty standard often play the comedian or sidekick.

Harriger has found that even preschool-aged children are aware of cultural stereotypes founded in appearance. In one particular study, Harriger found girls as young as 3 consistently preferred thin individuals over larger or average-sized people.