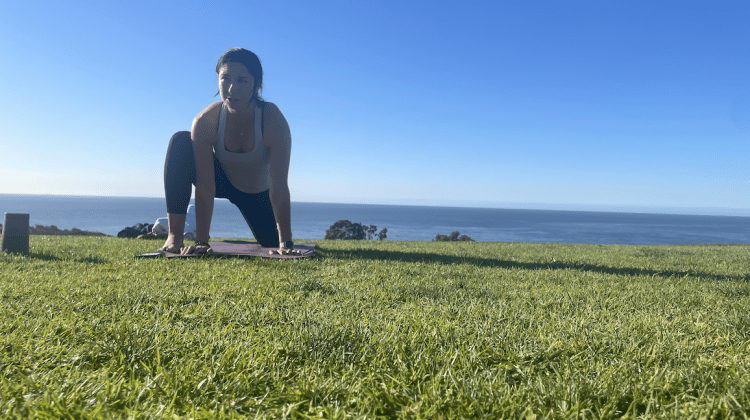 Assistant Chaplain Shaya Aguilar leads the Seaver 200 yoga class breakout group at Alumni Park. The group meets almost every Wednesday for an hour to help students destress in the midst of their stressful weeks. Photo courtesy of Georgia Puckett

Music. Walking. Meditating. Hanging out with friends. Going to the beach.

These are some ways that Pepperdine undergraduate students said they balance the stress of their classes and various workloads.

“I have a very stressful schedule right now,” Lucey said. “I’m in Biology, Chemistry and Calculus.”

First-year Lorenzo Mars said regardless of one’s major, stress affects everyone on a regular basis.

“I think just in general, stress is supposed to be part of life,” Mars said. “However, I feel like sometimes, the extent that I let it get to me is not good.”

Amid the rush of her classes, Lucey said she struggles to take time to relax.

“A lot of times with my heavy schedule, I often forget to make time for myself,” Lucey said. “I try to give myself at least five minutes every day to meditate and get back to a peaceful mindset.”

Lucey is also a part of a yoga Seaver 200 breakout group that meets most Wednesdays at Alumni Park. Lucey said she is grateful for the group because it is a designated time in the week that she takes for herself.

“I chose it because as much as I want to make time for myself, I often push it to the side because I have more important things to do,” Lucey said. “But because it’s a required class for me, it forces me to go and destress in the middle of the week, which is the perfect time.”

Mars said when he has a lot of work or a particularly stressful assignment, he takes a moment to work through his stress to move forward.

“I freak out first, and I think I kind of need to freak out to get it out of my system,” Mars said. “Then I get some work done but I like to take breaks.”

It is important to reward yourself, Mars said. Mars typically spends his study breaks hanging out with friends or watching YouTube.

“Usually, I get some work done, and then I’ll go out and do something with my friends or my girlfriend,” Mars said.

Pepperdine’s location allows students to visit the ocean with ease. First-year Nathan Fitch said when he is stressed, he will typically hangout with his friends or go to the beach.

“I definitely get stressed at times,” Fitch said. “Usually what I do is for exams and stuff, I’ll just try to talk to my friends or we will all go to the beach and just take a minute to calm down.”

Fitch said he recognizes the importance of learning to deal with stress now and its benefits for his future education and professional career.

“College can be a really stressful time in our lives, but it is important to learn the ways that you best deal with stress in order to be successful in the future,” Fitch said.