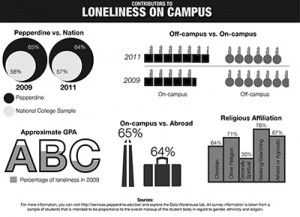 Loneliness is a problem at all college campuses, but Pepperdine has significantly higher numbers of lonely students, according to the National College Health Assessment, a survey Pepperdine students can voluntarily take every two years.

Some 64 percent of Pepperdine’s student body reported feeling lonely in a 2011 survey, as opposed to an average of only 57 percent at other universities.

Counselors in the Counseling Center speculated that the isolated campus location, mental health issues such as depression and anxiety, an empty campus on weekends, busy schedules that prevent the development of deep relationships and feelings of inadequacy with such high academic, behavioral, social and financial standards all contribute to the loneliness on campus.

But these issues wouldn’t be so powerful if people just talked about their loneliness, according to junior William Cohen, the founder of the new club S.A.D., Students against Depression.

Cohen first had the idea when he started struggling with depression in April 2012 but did not act on the initiative until last semester, when he struggled more and watched others go through symptoms as well. Though the club is still in its preliminary stages, Cohen said he intends for it to serve as a community that will confront depression on campus.

Cohen said he hopes to gain funds and hold events and host speakers.

Albert Hawks, alumnus of Seaver College and office worker in Career Development at the law school spoke at a Wednesday Convocation last year about some of the causes of loneliness on campus.

“So sin and behavioral stresses, we don’t like to talk about it because at Pepperdine and in Christian communities, we feel this constant pressure to be a perfect saint and to not struggle and to have everything together.”

While Pepperdine has acknowledged the problem, it’s not a simple fix, said Connie Horton, Counseling Center director and associate dean of students.

“We can’t just establish a loneliness program and expect it to be solved,” Horton said. “If people are more attentive, there will be more success. Pepperdine students are to be commended because many of them want to make a difference in the world. But what many don’t realize is that there is a lonely person on the other side of the cafeteria or someone in the suite that needs someone to make a difference in their lives.”

Senior Bailey Taylor said she often felt she could not discuss her feelings.

“I often felt forgotten, out of place, not good enough and simply friendless,” Taylor said about her junior year, which she discussed at a Wednesday Convocation. “I found myself in a deep slump and every activity felt meaningless. I was aware of my sadness but felt that being alone was an anomaly, so I couldn’t really admit that being lonely was my problem.”

Cohen said he hopes S.A.D. will help students who are facing these issues.

“I hope that [the club] will help people understand that they are not alone in their struggles. Most importantly, I hope to encourage people experiencing depression to find help in whatever way is best for them. I hope that this group will become popular and important to the stability of Pepperdine’s community.”

Campus Minister Linda Truschke said that even though feeling alone sometimes is completely natural, Pepperdine is still working to dispel feelings of loneliness.

“We’re at a unique place that we even care about this issue,” Truschke said. “There are plenty of universities that don’t care at all about their students outside of the classroom.”

Although Pepperdine students struggle with loneliness more than students at many other schools according to the statistics, there is hope.

“Trust that it will get better,” Taylor said from personal experience. “Because it will.”

There are places and people that are here to serve students, Truschke said, including the Counseling Center, Student Affairs, Housing and Residence Life, and Campus and University Ministries.

But it is also important to remember that this is a community problem and a community solution, Horton said.

Cohen said he hopes S.A.D. can contribute to a greater feeling of community on campus in order to dispel such wide-spread loneliness. S.A.D. will give students a space to talk about their problems and realize that they can ask for and receive the help they need and deserve.