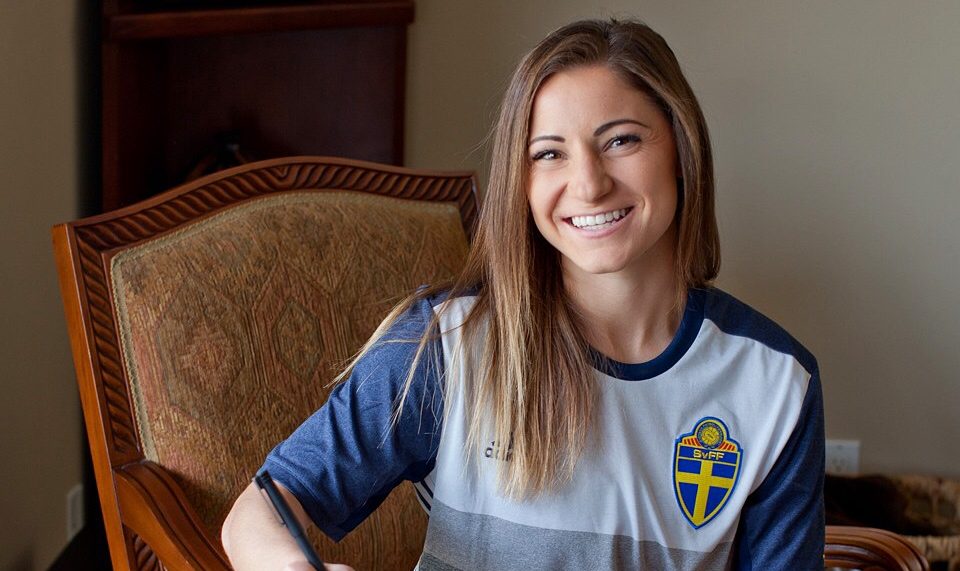 Another Waves soccer graduate has signed a contract to play professionally. Midfidler/Forward Rylee Baisden will leave for West Sweden on April 3, where she will play for Skövde KIK.

“I’m excited to be in a new culture,” she said. “Being a foreign girl on the team is going to be really interesting.”

Baisden registered for the NWSL draft in January, but after she wasn’t selected had to decide what direction to go. She met a woman at the draft who could connect her with teams overseas.

“She was like hey if everything works out with the draft awesome, but if not, here’s my card,” Baisden said. “After I didn’t get drafted, I emailed her a week later.”

This email led to offers from two teams in Sweden. In the mean time, Baisden had also been offered a tryout at the Seattle Reign.

“The week I was going to Seattle I got two emails from this lady saying two Sweden want to sign you, they have contracts ready to go,” she said. “I ended up saying I have a prior commitment to Seattle, but I’ll let you know how it goes.”

After she didn’t receive an offer to come to preseason, she explored the two offers from the teams in Sweden, eventually choosing Skövde KIK.

“I was comparing the contracts of which one I wanted to go to,” she said. “I ended up going with this team called Skövde. They’re in West Sweden.”

Baisden redshirted her freshman season at Pepperdine and started six games her redshirt freshman year and 11 in her sophomore year. Although her performance was consistent early on, she really took off her junior and senior seasons in 2015 and 2016. In 2015, she started all 19 games and was an All-WCC (West Coast Conference) Honorable mention. In 2016, she led the team in goals and assists on the way to All-WCC first team and NSCAA (National Soccer Coaches Association of America) All-Region third team honors.

Pepperdine Head Coach Tim Ward said that Baisden’s growth over the past five years was huge for her personally and for her team.

“Rylee’s story is so very cool in that she has really grown in her time here at Pepperdine,” Ward said in an email. “She had to redshirt early in her career because of an injury over summer and as hard as that was for her and us at the time, it turned out to be a major blessing having her here back for a 5th year.”

As a teammate, Baisden is known for her consistency and spirit, her teammates said.

“She led not only with her voice but by her example,” sophomore Michelle Maemone said in an email. “There was never a doubt in anyone’s mind that when she stepped on the field she was going to give 100%, her consistency was something that always really stood out to me along with her tenacity and unwavering fighting spirit.”

“She is the kind of teammate that you can look at and know that they will have your back in the middle of a battle,” junior Bri Visalli said in an email. “Sometimes when the games get tough, Rylee is a constant factor that you can look upon. Her dependability is a remarkable aspect of her’s and something that I have always appreciated.”

“Rylee will be leaving behind a wonderful legacy, one where standards were raised and goals were accomplished, and all for the love of the team, program and university,” Maemone said in an email. “I am so excited to see what Rylee accomplishes as she begins her professional career in Sweden.”

Baisden is the third Wave to go professional in recent years. Former Waves soccer players Lynn Williams and Hannah Seabert both have also gone professional in the NWSL, Williams with the Western New York Flash and now the North Carolina Courage, and Seabert with the Orlando Pride. Visalli says that this success is encouraging to younger players.

“The relatively smaller Pepperdine program is making some huge waves,” Visalli said in an email. “Not only does this success bring positive press to the women’s program, but it also encourages players with similar aspirations of playing at the next level, myself included. Watching your teammates at the next level is extremely rewarding and knowing that you were able to share in their success is truly a blessing.”

Ward said he is proud of Baisden going professional and that she’ll serve as a great example for future soccer players like herself.

“She is really a role model for any Wave who might find it difficult in their first season or two,” Ward said in an email. “Rylee showed that if you persevere and commit to the process, amazing things can happen for you and your teammates.”

Baisden, who finished her classes in the fall during her redshirt senior season, is returning for graduation at the end of April to walk with her classmates before heading back to Sweden. Then, she will continue playing soccer for a living, which she says is pretty exciting.

“Being able to say soccer is my job is gonna be really cool,” she said.