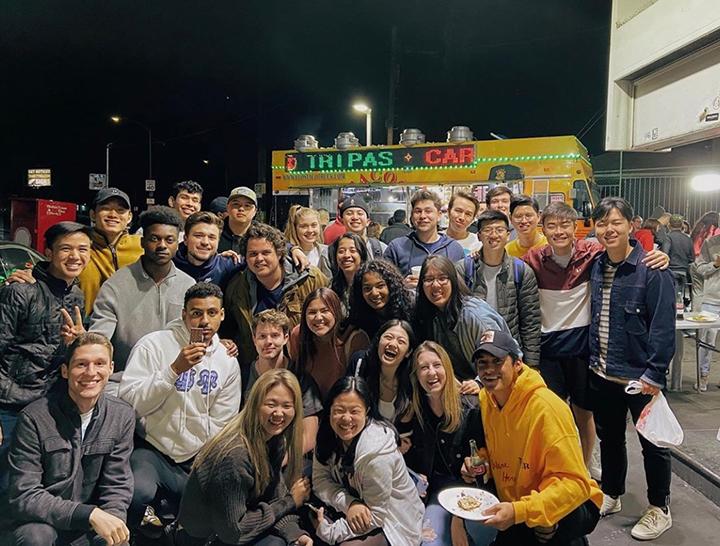 Students from the Shanghai program gather outside Leo’s Taco Truck in LA after returning to the Malibu campus. Pepperdine made the decision to suspend the program on Jan. 28 due to the coronavirus outbreak, and now the 38 students are navigating the unexpected move back to California.

Fewer than two weeks after returning home from Shanghai and just a day before his scheduled return to the Malibu campus, sophomore Mason Chin wanted to attend the biggest game of the year Feb. 15: Men’s Basketball vs. Gonzaga.

Chin, who works as a media coordinator for International Programs, called his office to ask for permission to visit campus one day earlier than they had specified. He did not receive a straightforward response.

“They just said, ‘Please be on campus on Sunday [the scheduled return day],’ but they didn’t really tell me yes or no,” Chin said.

Many of the Shanghai students, including sophomore Megan Villaverde, said they felt confused and unsure about how to navigate being unexpectedly back in Malibu, particularly after months of envisioning what their sophomore year would be like in Shanghai.

“It definitely was pretty devastating to think of the whole situation moving so fast, but in very different directions, because not everybody was around us to really focus on what was next,” Villaverde said.

Shanghai participants received an email Jan. 28 from Executive Director of International Programs Beth M. Laux informing them of the suspension of their program and to spend two weeks at home with their families upon their arrival to the United States. Most students were out of the country for their one-week travel break when they received the news.

It was the first time Pepperdine has ever had to cut short an international program.

With the threat of the coronavirus, Pepperdine has so far suspended two programs this year: Shanghai and Florence. Thirty-eight students in the Shanghai program returned to Malibu on Feb. 15, while 54 students in the Florence program are in the next several days expected to fly back to the United States.

“The experiences that we had with Shanghai and the Shanghai students certainly help us understand student needs during this process [the suspension of the Florence program],” Laux said. “So that has been very helpful as we make decisions moving forward.”

Villaverde said it has been challenging being back and settling into Malibu.

“I know a lot of us really miss Shanghai,” Villaverde said. “And now that we’re back, we’re just trying to get settled in.”

Although sophomore Genevieve Rogers said she felt she was warmly welcomed after coming back to campus, many other Shanghai students have not experienced the same response to their arrival.

Sophomore King Uchekwe said he felt that his roommate was unprepared for his arrival back on campus, which Uchekwe said was an “unpleasant surprise.”

Many Shanghai students, including Chin, said they have heard others target jokes about the virus toward them. Some of the jokes Chin has heard are in reference to the origins of the disease or Shanghai students having the virus.

“I don’t have a big quarrel against [the jokes], but I can understand why that can be offensive to a lot of people from the program or [to people of] of Chinese descent,” Chin said.

Rogers said another challenge she encountered is being able to talk to Malibu students about her experience.

“It’s hard to talk to people from Malibu about it simply because it was such a strange and unique experience in a way that it’s hard to articulate exactly what we’re going through to people who didn’t go through it,” Rogers said.

Chin said a lot of the Shanghai students are experiencing “reverse culture shock” — a term Shanghai Program Director Charlie Engelmann taught them — since returning to Malibu.

“We’re trying to readapt and reevaluate ourselves in this kind of setting [the Malibu campus], which is a bit of a challenge as China’s pretty drastically different than Malibu,” Chin said.

Rogers echoed Chin’s comment about the challenges of unexpectedly having to assimilate back into Malibu culture after becoming accustomed to living in Shanghai.

“I wouldn’t wish the adjustment and all the stress that I’ve gotten from having my program be canceled upon anyone else,” King said. “I have sincere thoughts toward [Florence students] because I know they have a lot to encounter in the near future with getting stuff done and situated for the rest of their semester.”