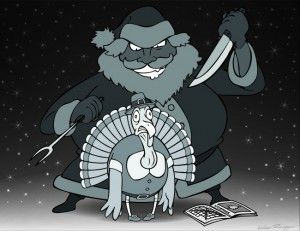 Hey folks, it’s that one special time of the year, when everyone’s happy and full of good cheer. The night air gets cold and the sweaters come out, you’d better not cry and you’d better not pout. Macy’s rolls out the yuletide decor, tinsel and holly strung through the store. The stockings are hung by the chimney with care and the jingle of silver bells fills the air. The excitement is building: Come on, admit it. Can’t you just feel the Christmas spirit?

What’s that? You can’t feel it? It’s only Nov. 10? Well, you never would’ve known. The truth is that Christmas is still 44 days away. That’s well over a month between now and jolly old Saint Nicholas shimmying down your chimney. What’s the rush?

The Christmas season seems to start earlier and earlier each year, and this year it has reached a tipping point. This year, as soon as Halloween was in our rear view mirrors, Christmas started. Look around you. Starbucks is pouring peppermint mochas into Christmas-themed cups. Harold and Kumar’s inexplicable Christmas movie came out last Friday. Justin “Big Daddy” Bieber’s Christmas album hit the shelves Nov. 1, and its lead single, “Under the Mistletoe” came out way back on Oct. 17.

Every year, on the fourth Thursday in November, America celebrates Thanksgiving. You may have heard of it. It’s a holiday steeped in tradition, going all the way back to the founding of our nation. We take this time to remember the first Americans, who after starving on the Mayflower for a year, were pretty thankful for the food of their first autumn harvest back on dry ground. Legend has it that the Pilgrims and the Native Americans sat down together and shared a meal of goodwill before passing out on the couch watching football (or something like that). Today, we continue this legacy, taking time out of our busy schedules to relax, enjoy the kinship bond of our families and eat until we feel like we might explode.

While Thanksgiving is definitely one of the cool kids on the holiday block (three days off of school anyone?), it really can’t compete with Christmas and its flood of presents, vacation time and catchy sing-alongs. Thanksgiving essentially brought a knife to a gunfight here.

People like Christmas for two reasons: It’s awesome, and it makes money. The most wonderful time of the year is also the most profitable. The day after Thanksgiving, dubbed “Black Friday,” is the busiest shopping day of the year. And considering that an integral part of our celebrations includes decorating everything in sight and giving and getting gifts, a large part of our economy receives a substantial Christmas boost. Given the current state of the economy, a lot of us are asking why not get the ball rolling sooner rather than later? The collective retailers and advertisers of our nation understandably want to milk the season for everything it’s worth, and a longer Christmas season leads inevitably to more Christmas spending. From 1939 to 1941, President Roosevelt, doing anything he could to ease the Great Depression, moved Thanksgiving up a week so that the Christmas shopping season could start earlier.

Christmas is fantastic, but it needs Thanksgiving. You will vomit profusely if you eat nothing but chocolate for two months. In the same way, we can’t imbibe the saccharine sweet Christmas aura for too long, or we might get societal diabetes. Our national psyche won’t be able to take it. Think of the music. Every radio station plays nothing but Christmas music, and by the end of December, most of us are ready to punch something if we have to hear “Rudolph the Red-Nosed Reindeer” one more time.

Plus, the natural order of things needs to be able to run its course. Thanksgiving is the gatekeeper for the winter wonderland. It’s the Ed McMahon and his “Here’s Johnny!” announcing of the main event, Christmas. Rushing through Thanksgiving is like going for the dessert first. We need to take the time to reflect, and realize how much we have to be thankful for. It’s the necessary mental preparation to make sure the Christmas spirit moves beyond “Presents! Presents! Presents!” Realizing how thankful we really are is what leads to the selflessness that makes peace and goodwill toward all possible.

Remember friends, November’s not done. The holiday season has only begun. It’s moments like these that make life worth living. So have yourself a merry little Christmas — just after Thanksgiving.

Independents vote for influence over ideology