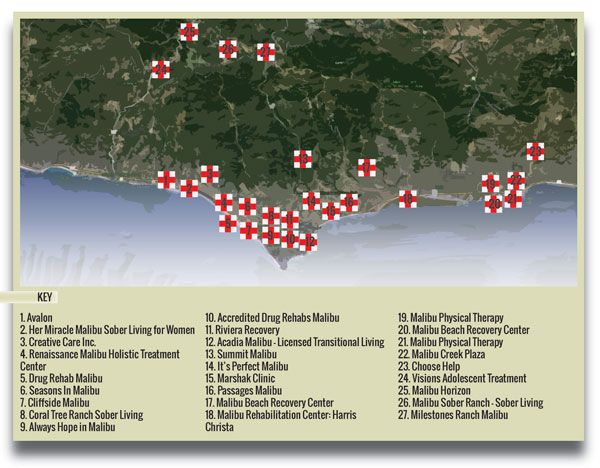 Malibu, once best known for its iconic Malibu Pier, Zuma beach and Surfrider Beach, has now become the top destination for people to kick their drug and alcohol addictions. According to the 2012 census, Malibu’s population was 12,832 at the time, and 35 state-licensed rehabilitation centers, not including “sober living homes,” were located within the city.

Rehabilitation facilities such as the 10-acre Passages Malibu and opulent Cliffside Malibu have become a flash point for anxiety. Some residents and City Council members have begun to speak out.

At least one man has concerns for the safety of his family, especially for his 13-year-old daughter. Rey Cano, who has lived in Malibu for more than 20 years and owns an appraisal and consulting firm for real estate, experienced the intrusiveness of the rehab facilities and its patients firsthand.

“I came back from a business appointment, and there was a naked man in front of my house,” Cano said. “He wasn’t wearing a stitch of clothing. He had cuts and lacerations all over his body and was bleeding as if he was climbing through a forest.” Cano was made aware that the man was from a rehab facility because the man asked Cano if he could be taken back to the facility. Cano called the police who returned the man to the rehab facility.

Malibu City Attorney Christi Hogin has expressed public concern about rehab centers. She cited a 2007 complaint by the city that accused Passages of violating zoning laws by providing false information to the state by applying fake addresses to the facilities to guest its patients. The facility is only legally allowed to operate with six beds per address in order to comply with the Americans with Disabilities Act, which consists of laws created in 1990 that protect individuals with disabilities from discrimination.

Malibu City Council Member and former Mayor, Lou La Monte explains how the once small rehab facilities have become the enterprise they are today. “While it has become is an incredibly lucrative business … the intention of the law was to have only six beds in house, but they just kept buying the house next door. Pretty soon the whole street is filled up with a single facility.” He explains that it greatly affects the local atmosphere because, “You no longer have a neighborhood, but a hospital zone.”

One of the top rehab executives responds to residents’ concerns.

“Everyone recognizes the need for top-notch drug and alcohol treatment, they just don’t want it in their backyard,” said founder of Cliffside Malibu Richard Tatie.

The debate frustrates Taite because, “any time someone or a facility does something wrong, it negatively affects Cliffside.”

Sobriety doesn’t come cheap in Malibu. At Passages, the cost for the 31-day program ranges from $55,000 to $90,000, depending on special accommodations such as a private room or extended stay at the facility. Cliffside Malibu costs slightly less, with the tab running from $53,000 to $68,000 per month.

Healthcare Global magazine rated Passages Malibu the No.1 rehab center in the world in 2012. Pax Prentiss, the founder and CEO, explains on their website that Passages doesn’t view addiction as a disease, but rather something that can be cured by focusing on the underlying personal issues affecting each patient. Passages declined the Graphic’s request for an interview.

Cliffside Malibu’s website promises that it has “distinguished itself among treatment centers for its true commitment to your recovery. We have created a safe, comfortable home to remove every distraction we can for you and enable you to focus on reclaiming the life you deserve.”

Celebrities such as Britney Spears, Charlie Sheen and Lindsay Lohan have each allegedly flocked at one point or another to the safety and comfort of Malibu’s upscale rehab facilities to treat their drug or alcohol addictions, according to Taite.

Lohan was forced to check into Cliffside following a court-mandated 90-day sentence in March 2013 after pleading no contest to reckless driving and lying to a police officer about her involvement in a car wreck in June 2012 as reported by TMZ.

Taite said that there has been much speculation about the actual number of celebrities who are treated in Malibu, and what actually happens once they arrive.

“The rehabilitation facilities don’t bring in a lot of celebrities. That’s media nonsense. If you don’t know where they’ve gone, they’ve been here. The public has only known about one person in the history of my center [Lindsay Lohan] and every other high profile person that’s been here no one’s ever heard about them,” Taite said.

Still, some members of the Malibu community remain upset, and complaints made to the city against the centers have included illegal construction, increased traffic and the never-ending hunt of the paparazzi to get the perfect shot.

“The houses begin to overwhelm the neighborhood. Pretty soon you can’t get a car through the streets, because there are so many people there. The strain on medical infrastructures is enormous. It overwhelms every facility we have to cope with, including the medical field, police, ambulances, and everything else,” La Monte said.

Ken Kersey, former Malibu mayor (2002-2008) and retired school teacher, who has lived in Malibu for more than 52 years said: “We don’t object to the rehabs, what we object to is the commercialization and turning our private street into a medical neighborhood.” Kersey explains that in his Sycamore park neighborhood there are about 40 homes, of which seven of those are rehab facilities, including one specifically for teenagers.

The street on his neighborhood is only about 12-15 feet wide. “For the Super Bowl, someone had a huge party, so there were many cars parked up and down the streets. The fire trucks had trouble getting through to Passages [the rehab facility located at the end of the street].” Kersey explains that this isn’t the first time the overcrowding of his street has posed a serious problem. “In July, we had 35 different times fire trucks and ambulances were called up to the rehab facility.”

Malibu Mayor Joan House agrees: “They are a drain on our resources. More calls are made to the police and fire fighters from the rehabs than anyone else in the community.”

Taite, however, refutes those complaints. “I choose to live in Malibu. I work from home most days,” he said. “Reality is that I would never do anything that would contribute negatively to a place that I love to be. I live next to another small center, and I don’t mind living next to it. They don’t do anything that’s inappropriate. Traffic comes in the summer and in the morning when people are going to work.”

Cano made it clear that he doesn’t dislike the rehab facilities and wishes the patients success in receiving treatment, but rather has concerns about the security. “The facilities don’t monitor their patients so they can ensure the safety of their neighborhood,” he said.

Taite is quick to point out the extra precautions that Cliffside takes to not only ensure the safety of its patients but also the surrounding neighborhood. “I hired a 24/7 off-duty police officer for 45 grand a month when I had a high-profile celebrity here to make sure that my neighbors weren’t pissed off and to ensure that paparazzi wouldn’t be a problem.”

According to Taite, the uniformed police officer stood at the top of the drive-way with his patrol car parked nearby. When the paparazzi came he told them to leave or that he would arrest them because they were on private property.

“I did this for my neighbors, because we always do the right thing,” Taite said. “I also had other high-profile people there at the time who I didn’t want to feel unsafe.”

La Monte also points out larger issues at play. He explains that the rehab facilities are becoming an issue which is encompassing the whole state, not just Malibu, but also communities such as Long Beach and Riverside. La Monte also said that, “the real issue is going to start to come soon, which is ‘Sober living homes.’ What they are is any single-family house where they provide a drug and alcohol free environment. There is no licensing requirement for these types of homes. And they are beginning to pop up all over the place, Malibu specifically.”

Taite sums up the debate: “There’s a lot of noise, but it’s really simple.” He made it clear that his rehabilitation center is here to stay.

La Monte said he has mixed feelings about the rehab facilities in the local beach town. But more than anything, he makes it clear. “What we’re asking these facilities is to simply follow the law, and to not have more than the legal amount of patients treated at a time in the facility,” La Monte said.

La Monte, who has lived in Malibu for many years and is a leader in the fight against the proliferation of luxury drug rehab centers in Malibu said, “The rehab facilities are kind of taking us over, but we’re fighting back. We will find a way to get legislation done. Not just for the neighbors, but the patients too.”

“We’re not worried about one drug rehabilitation being in Malibu, what we’re concerned about is the overconcentration which changes dramatically the characteristic of a neighborhood.” Mayor House said. 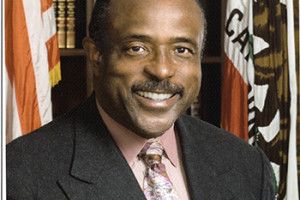 Former Wave state Sen. Roderick Wright of Inglewood, a Democrat, made splashes in Sacramento, Calif., after recently being...
Copyright 2018 Pepperdine Graphic
Back to top