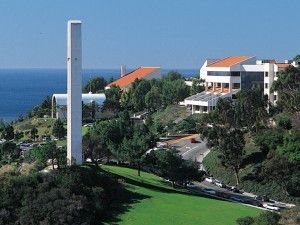 The latest U.S. News & World Report ranking of Best Colleges placed Pepperdine at 55 among “national universities,” tying with The Ohio State University at Columbus and University of Maryland at College Park. Pepperdine’s administration remains unruffled by the small dip from last year’s placement at 53.
President Andrew K. Benton sees a certain level of flattery in being placed in the national university category, one in which universities are described by the U.S. News & World Report as “offer[ing] a full range of undergraduate majors, master’s and doctoral degrees. These colleges are also committed to producing groundbreaking research.”
“In many respects we are miscast as a ‘national’ university since most of the schools in that category have a full-range of doctoral programs. We don’t,” Benton wrote in an email. “While we might top the charts in the category where we do belong, I always feel a bit complimented when compared with theresearch universities and the oldest and best-endowed institutions in America.”
Benton pointed out that there are vast differences between the similarly ranked institutions. The University of Maryland at College Park, which tied with Pepperdine at 55, was founded in 1856, enrolls nearly 30,000 undergraduate students and is a “comprehensive research university,” according to the school’s mission statement.
According to the U.S. News & World Report, the process of ranking colleges is broken into three steps. First, schools are divided according to their missions, whether they are research based or more liberal arts intensive. Next, the college is assessed on 16 different academic excellence indicators. Lastly, the colleges are compared to one another in each category, being evaluated on numerous things like student retention, faculty resources, alumni giving and graduation rate. The overall score of the three areas then determines the numerical ranking among other universities.
Despite the relatively mathematical process, there still seems to be an element of fluctuation in the system, according to Benton.
“The formula changes a little bit almost every year. Last year we benefited from the change in formula, but not this year,” Benton wrote. “On balance, we don’t manage to the USN&WR survey standard, but because students and alumni care, we pay attention.”
While Pepperdine moved down two spots overall, certain areas did improve from last year. This year, Pepperdine jumped 10 positions in terms of academic reputation, a change that Benton accredits to faculty and alumni.
Several other categories experienced a change in the negative direction this year. Benton expects the consequences of some recent financial decisions to blossom on the survey in future years.
“The decisions we made during the Wall Street crisis in 2008 and 2009 to reduce our budgets in certain areas and to hold tuition down as low as possible are now being reported,” Benton wrote. “I expect the benefits of those decisions to appear in future years.”
Alongside many other major universities, Pepperdine’s administration considers minor shifts in the ranking relatively trivial. However, as Pepperdine closes in on its 75th anniversary, Benton remains proud that Pepperdine is placed among the highest-regarded and longest-established universities.
“In our 75th year, to know that we are considered among the top schools in America is a bit amazing.”

Monday at 10 p.m., students waited in anticipation to find out what service opportunities would be offered...
Copyright 2013 Jupiter Premium Magazine Theme
Back to top