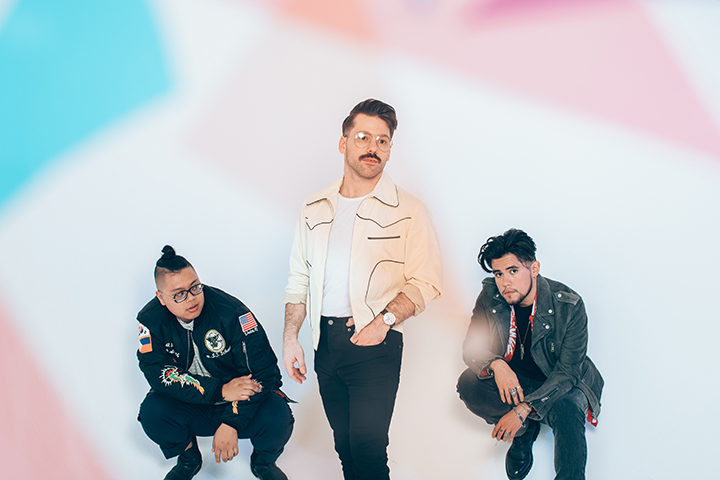 Electric-indie pop band A R I Z O N A headlined the Pepperdine Waves Weekend annual concert Oct. 12. The band’s three members, including Zach Hannah (vocals), Nathan Esquite (guitar) and David Labuguen (keys), are originally from the East Coast and have created music together since 2015. With over a billion streams on various platforms, A R I Z O N A has created worldwide waves through their ingenious brand, according to its website.

A R I Z O N A has produced several hit songs, including “Oceans Away” and “Cross My Mind.” The band recently released its second album “ASYLUM” Friday, Oct. 11 prior to performing at the Waves Weekend Concert.

How did you get started, and how did you come up with the name A R I Z O N A?

David: Well it starts with friendship, and it ends with iced tea.

Zach: We’ve been making music for a long time together. It was just [us] hanging out most of the time and making music, and at some point, it turned into us producing and writing for other artists together, and we continued that for a while. It was something that we did for years and years, and we always knew that we loved making music and creating stuff together. [One day] we wanted to have fun on our way, so to speak, and for us, that was staying up late one night making songs just for fun, but we didn’t know it was gonna be like a band. We just made some stuff, and it was fun. What do we call [the band] if we do put [our music] out on SoundCloud or something, and Nate was wearing an Arizona iced tea hat. He just pointed to the hat and said ‘Arizona’, and we laughed and we had a good time about it. We wanted to just have fun and it wasn’t really about the name. So that’s kinda how A R I Z O N A became the name of the band and carries that part of the story for us.

Did you always know that you wanted to perform and produce music?

David: I think we all saw ourselves as more behind the scenes people for a while, but Nate grew up in bands but was going to school for production, and [Zach and I] were writing and producing.

Zach: It was the obvious thing, that’s for sure. We always made music together, but it wasn’t like for ourselves, so when we did do it for ourselves, it was sort of a joke, and we were kind of giving up on it all, and it just so happened that those couple songs that we made on our way out turned out to be this.

What inspires you and what fuels your music?

David: When we go and play shows, I think a lot of people come up to us, and they tell us how the music has influenced their lives. In like a really similar but different way, making the music does something for us on like a spiritual level. Being able to create is therapeutic, and being able to create together is this therapeutic catharsis type of thing. I think that that sort of connection is a big part of why we felt like we wanted to do this in the first place.

Zach: It felt better knowing that you can come together with your best friends and create not for a particular reason or a purpose. You’re not aiming for anything, you’re just using your friendship as a way to get things out of you and onto a canvas, so to speak — to turn experiences that you have, negative or positive, just into something that’s productive and good that can go serve a purpose somewhere. But for us, the purpose was always just what the music did for us, and it just so happens that it does that for the listeners as well, but it’s a two way street.

What are some of the biggest challenges that you’ve had to overcome?

Zach: There’s so many challenges that present themselves every day that I feel like there’s not particularly one group of small things you can name. But I think maybe one of the biggest things for us has been accepting where we are and accepting that this is what we do now. It’s OK to be vulnerable in creating and being the people that are sending [and creating] the message and carrying that responsibility. Knowing that that’s something that we do every day now and that there are people out there that it affects, [we keep] that in the forefront of our mind, rather than letting that slip to somewhere else.

What has been your greatest achievement thus far as a group?

David: Not breaking up yet.

Zach: We crowd sailed in a huge unicorn, thanks to Nate, at Hangout Fest.

Nate: It was this massive six-person inflatable unicorn boat with cupholders.

Zach: We blew it up before the set and then during one of the songs, we literally jumped in this unicorn and set sail. I had the US of AZ flag, and at every single point [I was scared] between getting into [the float] and getting back on stage. I was terrified. I wasn’t sure if I was gonna make it in and then I did, [but] on my face, upside down. Then I basically cried inside for six minutes while I finished the rest of the set with joy, fear and adrenaline. That’s probably the pinnacle of A R I Z O N A thus far.

Do you have a favorite festival that you’ve performed at?

David: Imagine if there was a festival down there on the beach. That’s what Hangout is, and every stage is by the water. And there’s an artist area that has its own private beach, which is really nice. They definitely, at least from the artist point of view, take care of us so well. So that’s probably our favorite. That’s one we tell everyone about.

Is there anything on your bucket list that you’ve been able to cross off over the years together?

David: My first time in Europe was on tour with these guys. I turned 28 on that tour. It was awesome, so that’s definitely like a bucket list kind of moment. It was our Euro trip moment.

Zach: This whole thing is a bucket list. Like, who gets to experience some of these things? It’s easy, and fun and difficult and challenging. I think [A R I Z O N A] definitely crossed off a lot of stuff for us.

Do you have a routine or ritual before performing?

Nate: I take off my shoes.

David: We have roundup, a little prayer and then [we] get out there.

If you could go back in time and talk to yourself when you were in college what advice would you give yourself?

Zach: I don’t even know if you could talk to that guy. Me in those college years, at that age, was just so dead set on making it work, doing something, figuring it out, that I don’t even know if there is any advice that he would take. I think that’s possibly what made it so difficult at times for me, but also what got us here was that weird sort of tunnel vision.

David: I think I would tell younger me that it’s OK to take every once in a while to recover and that there’s years and years ahead, so it doesn’t have to happen tomorrow. I would tell my younger self that the big steps are made up of all the little steps put together.

Nate: I was pretty chill in college.

Zach: Nate’s been Nate. Nate’s always been a rockstar. I mean you’re looking at Nate, dude.

Nate: I would have told myself about the no shoes thing earlier.

Zach: Yeah, you would have told yourself to stop wearing shoes earlier.

Nate: I was still wearing shoes in college. Big mistake.

Are there any plans that you currently have for the near future?

David: We just released a new album. It’s called “ASYLUM.” That happened yesterday, so a little bit of sleep is coming up next. But in all seriousness, after today, we’re actually going to Mexico to play a show. [We’re] playing a festival down there.

Zach: We’ve already started working on album three, so we just released album two obviously. We’re getting a head start and gonna kick it into gear and start working on the third album between now and maybe spring and then once we’re done …

To keep up with the band, follow A R I Z O N A on social media @thisisarizonamusic on Instagram and @arizona on Twitter. Additionally, check out its website to learn more about the band and upcoming events. 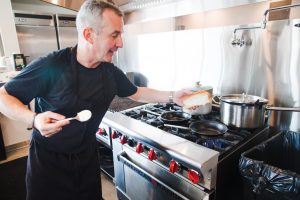 Photos by Milan LoiaconoStanding behind the bar in the sun-drenched space of his newly-opened restaurant is Nicolas Fanucci,...
Copyright 2013 Jupiter Premium Magazine Theme
Back to top