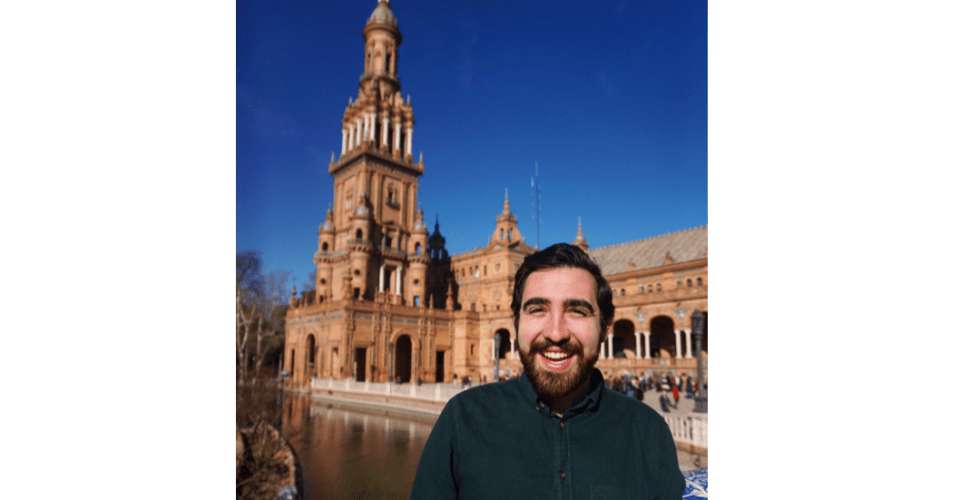 Jaime Del Barrio smiles in front of a Spanish monument while on a trip to Seville, Spain — an excursion he took while studying abroad in Heidelberg, Germany.

To have any and all questions answered about the Heidelberg experience, ask Jaime Del Barrio. Jaime, a senior from Mission Viejo, California, has concentrated on his Business Administration studies while serving as the Spiritual Life Advisor of Eaton house. In an interview with the Graphic, Jaime spoke about his unique travels abroad and connection to the Pepperdine HRL community.

What was your experience like studying abroad in Heidelberg?

Jaime Del Barrio: Because I was an RA, my experience was slightly different from most people, but I wouldn’t have traded the experience for anything — it’s the best program. It’s a small enough town but still felt big enough to explore. I found that as the RA, I loved the role in the sense that I was able to help build the community alongside my co-RA.

You can really explore all of Heidelberg within three hours, but it’s the people that you’re with that make the program amazing. For me, I didn’t have to work as hard to build a community because people already wanted to, they were the ones wanting to do worship nights and dinners together; that made my job a lot easier. I gained the skills of learning to be a good listener or being compassionate and kind which prepared me for freshman SLA. 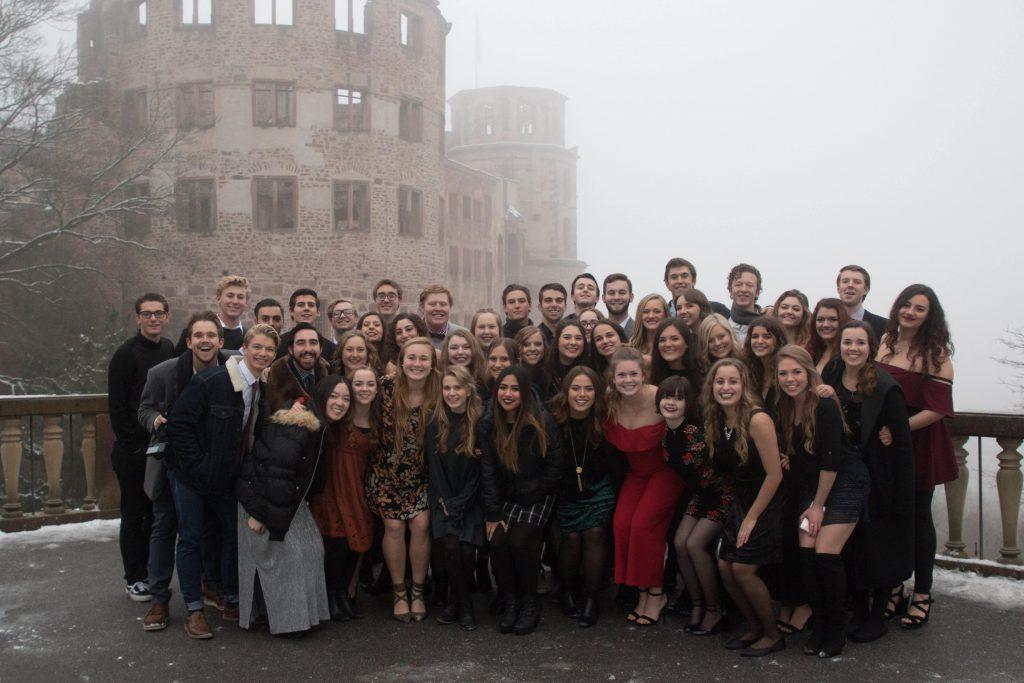 Heidelberg students celebrate Winter Formal together. Del Barrio served as Resident Advisor of the Heidelberg program during the 2019-2018 school year.

What were some of your favorite places you visited while you were in Heidelberg?

JD: I was able to spend time in Spain with my aunt and uncle who live there during winter break — seeing places in rural Spain that aren’t really put on the map by a lot of tourists. We took a field trip to Seville, which was so much fun.

During our trip, we stopped in Madrid at a museum where I actually met my grandma. It was random — I wasn’t expecting her to be there, but there I am, meeting my grandma for the first time since I was a baby with the entire Heidelberg program. That was a cool experience that otherwise, without Pepperdine, I wouldn’t have been able to plan that. Another fun trip was Greece during spring break. It was cool being able to see where the Heroes of Olympus from Percy Jackson was set, I was geeking out a lot. 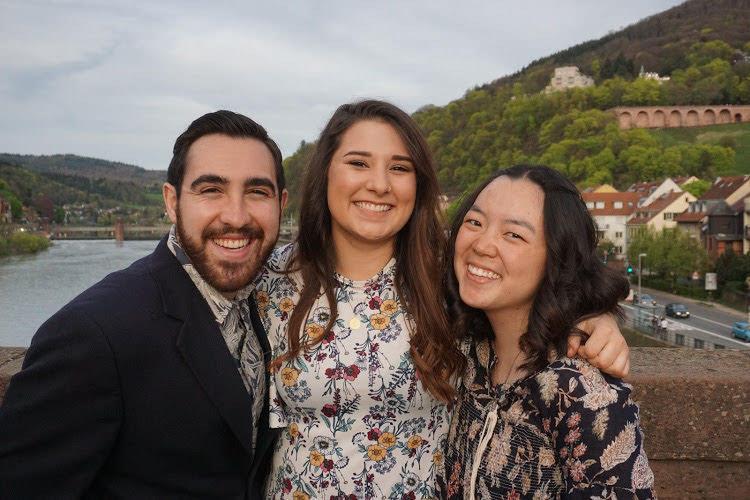 You have been an SLA for freshmen the past two years. What has this role meant to you?

JD: I love it. It’s different being an RA among your peers versus an SLA for freshmen. This year has been incredible with my triad, Logan Wood and Luke Seidman. Being able to work with them has been a lot of fun, as I re-live a lot of freshman year, all the events of NSO, Frosh Follies, but also as an upperclassman and have the experiences I didn’t have as a freshman and being able to lay out the wisdom for others. 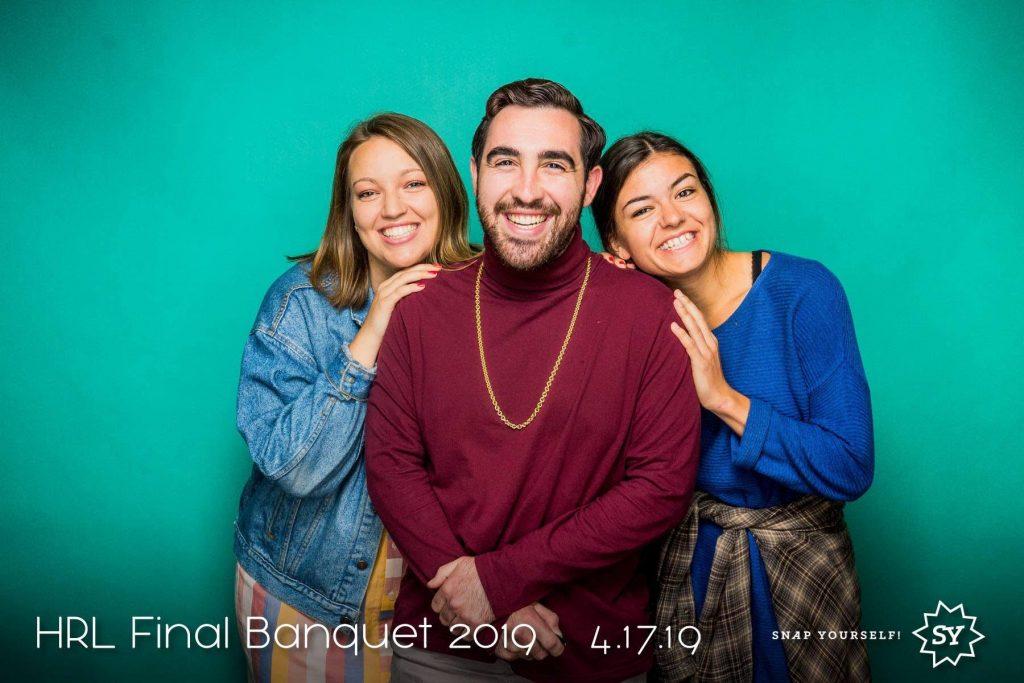 Rachel Jolly (left), Del Barrio (middle) and Josie Utz (right) pose in a photo booth during the HRL Final Banquet in 2019. Del Barrio has served as a Spiritual Life Advisor in freshmen houses for the past two years.

JD: I think that is the question I am trying to answer myself. I am currently working for City Hall of Malibu in the Parks and Rec Department. I really enjoy, as an RA and SLA, planning events and I think that is where I realized one of my strengths — from the beginning of an idea to the execution of events, I am good at planning. To do that on a larger scale for a city is something I enjoy. Another job I was looking at is in interior design. I love HGTV and I’ve always been a fan of architecture.

What advice can you give to younger students?

JD: Freshman year is definitely the best year to try new things, but it’s not the final year. After sophomore year, or after abroad, it’s a reset — you’ve changed and grown from the first two years — you can continue what you were doing freshman year or change it. At Pepperdine, you have the ability to change who you are. Get involved with as much as you can freshman year, but then pick what you genuinely want to do.

A Day in the Life in Buenos Aires: A Photo Series 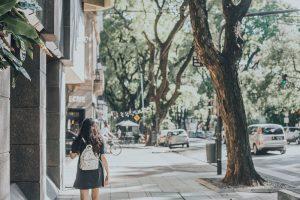 A Day in the Life in Buenos Aires: A Photo Series

A typically sunny street view of the corner of Av. Federico Lacroze and 11 de Septiembre 1888 in Buenos Aires. Photos by Ashley...
Copyright 2013 Jupiter Premium Magazine Theme
Back to top