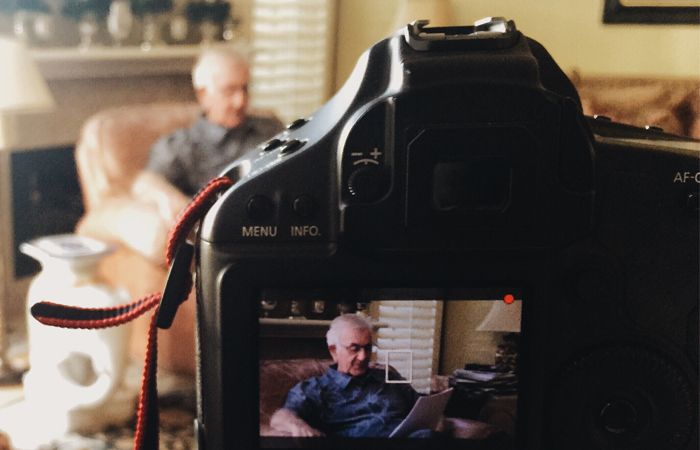 Pepperdine Graphic Media’s Multimedia Producer Alexander Hayes and Digital Strategist Alysha Tsuji visited George Pepperdine College alumnus John Skelly (’56) at his home in Newport Beach where he resides with his wife of 13 years, Norma. We sat down with John in his living room and asked him questions about his memoir, “Today, I am a Negro,” as well as about his civil rights experiences.

PGM: What prompted you or inspired you to go to Selma? In your memoir you said a lot of people were telling you not to go because it was very dangerous, but you felt convicted to go?

John Skelly: Just from my earliest growing up, I didn’t like people being pushed around. During my earlier years I had a lot of friends that were from different racial groups. My best buddies were black. I think being a Korean War Veteran, and experiencing what it was like to fight for the South Koreans against communism, that was embedded in me. And as this whole civil rights movement began to fester and move, I began to think, ‘I need to get involved somehow.’ But the opportunity didn’t really come from me. It was probably when I began to see on television what was going on.

Television was the message, and the message was coming across. It was coming across with Vietnam and the guys were being killed. We saw them in the rice paddies. Then we began to see the students protesting the Vietnam War and they were getting killed, and then we see the racial strife that was going on in the country. The cities were starting to burn a little bit. And then we began to see the black kids being killed and the children being bombed. You saw that in the movie “Selma.” As the movement began to develop more and more, I was under the tremendous conviction that I needed to go, at least to be there to identify in some way.

Right now, this march from Selma to Montgomery, it’s a very crucial point in civil rights movement history. At that moment when you were there did you fully realize the weight of this experience that you were apart of?

I realized it throughout the years because that experience sort of set me up, gave me sort of like an anchor. Wherever I went from there I was always involved in some kind of, dealing with, in some sense of injustice. Everywhere I went with my ministry, there was always an issue. The Ku Klux Klan in Pikesville going after our black students, Topeka, the black student boycott and trying to reconcile that whole community. It could be from way back when my great grandfather stood up to the Ottoman Turks and went to die in his faith and in his conviction and was assassinated.

You don’t know what’s in your system. My theological training taught me that there are two sides to the Christian faith: the believing side in Christ is Lord, the behaving side in what do we do with it. That’s where justiceness comes in. God of righteousness and justice.

But Selma is starting all over again. We’ve got so much strife going on in this nation now. The campus that’s being torn over the stupidity of the boys in Oklahoma. We’re on our road again. It has not ended. The fact that not one single republican candidate went to Selma is indicative of where we are today in our nation. At least honor that particular moment. We have a long way to go. As Martin Luther King said, 50 years ago, ‘If you can’t fly then run, if you can’t run then walk, if you can’t walk then crawl, but whatever you do, you have to keep moving forward.’ Life goes on.

In your memoir you said one of the most impactful moments was when, afterwards when you came back and Irving stood up for you, can you expand on that and the feelings in that moment and how has that impacted you?

Well, that moment, of Irving standing up for me, putting himself before these guys, all of the higher class, the power and the wealth. One of the most powerful men in America was the head of the Seabee base, they built all of the roads and the airfields for WWII, the American soldiers, the naval base for the whole pacific border. For him to stand up and expose himself before them, to show where he came from, that he was a Jew and he was in a concentration camp when he was a young man, for him to stand up for me, it was overwhelming. And I always remembered Irving. I’ve always wanted to honor him somehow. This is the first time I’ve had the chance. Throughout the years I’ve followed and I’ve studied and I’ve seen where the Jews were put in Ghettos from way back before even Christ’s day. And in Germany, I’m seeing those places where they were taken out and they were burned. I’ve been to Dachau and I’ve seen the crematoriums there. That moment, people who were apart of that, for people to stand up for me — a Christian pastor — is overwhelming.

It sort of reminded me a little bit of when I had heard about my great grandfather when he stood up to Islam — the great man that he was, and a humble man. I didn’t tell the story, but a few months later, I was invited to participate in Irving’s son’s bar mitzvah in the temple of Beverly Hills. Irving got up there in his suit and his tie and he got up there and he read in perfect Hebrew from the Torah. Overwhelming.

With your memoir, for people who read it or hear it, what is it that you hope they get out of it?

That they would see the greatness of Martin Luther King and his passion and his love for his people and for all of us. And that the clergymen responded to him. We were sitting on the fence and he pulled us off the fence. He said, ‘Come on, we’ve gotta do this. Don’t be embarrassed.’ He didn’t say, ‘You should be ashamed of yourself.’ And the surprises that we get in our lives.

The big surprises — my new deliverer was Irving Kosowitz. God surprises us, and every now and then, someone will stand up for us like my brother Joe did. I line that up with Dean Pulias did (Dean E.V. Pulias was the one who admitted Skelly into Pepperdine in the ‘50s. Skelly admitted his grades were hideous. He had just come out of his time in the army.). He saw something in me. He saw my grades in high school and he saw me coming out as a mess sergeant, and he said, ‘You got potential.’ We need to see the potential people have, and we need to stand up for people when the opportunity comes. Always go forward, pass it on, and thank God you have breath to even be able to do it. Every day is a gift.

From then until now, has there been a point that you think is most crucial in the civil rights movement that’s happening, would you say that it was Selma or would you say it was a series of events? From what you’ve experienced?

Yeah, Selma was one event, but as I laid out all my different memorabilia here, raising money for the Presbyterian church in Kansas City for the mission of Christ, the big one was Pikeville, Kentucky, when the un-American activities committee was born by the state to investigate our students that we were trying to help through the process of the Vietnam war by having them learn about conscientious objection if it was necessary for them to do that. Standing up to the Ku Klux Klansmen that were trying to murder my black students. We had guns on campus. Pikeville was rough. And when we were accused of being communists by those that didn’t want the people to be raised to another level, to keep them down to a poverty level, we stood firm. But we didn’t last. We all had to leave. But Pikeville today, I’m in touch with them, it’s a thriving university in Eastern Kentucky. They want to hear these stories.

But, yeah, it moves on. It moves on throughout my whole life and through the life of my children. I’ve got grown kids now. A 52-year-old son and a daughter who’s 50 and a son who’s 47. My son Steve was a firefighter who had to put out the fire during the riots in Los Angeles, and now Steve Skelly, my son Steve is the Captain Steve Skelly of the Los Angeles fire department. They deal with the racial problems in the fire department and the city working with all this. There’s sensitivity. My daughter, she went and saw Selma and she said, ‘Dad, I’m so proud of you.’ They got it. Everyone surrounding me got it. And I’m just trying to keep myself in that particular spirit, so that I don’t make mistakes and begin to discriminate. It’s easy to do that, just the way you talk and your attitude.

Along with that, that it’s an endless road and we’re not there yet, what are your thoughts on the progress that’s been made? And what else do you think needs to be done?

It’s amazing. We’ve made tremendous progress. We’ve made tremendous progress in this country. If we were able to somehow raise the level of education for everyone, so that we all have an opportunity for a good education and the costs are completely prohibited, and we have work for everyone, I think will resolve a lot of the issues we’re having today.

I think we all have eyes to see and ears to hear, so we need not be blinded when we see discrimination. We need to say something, speak to our parents, we need to say, ‘That’s not the right thing to do.’ I think sometimes being tied in a little bit more with our faith, that we ask God to give us the strength and the courage to stand when we need to stand to make a decision, and to stand up for what is right. God only expects one thing from us: for us to make the right decisions. We ask the guidance to make the right decisions, we have advisers, we have our parents, we have our churches, but when we see it happening, we need to have the courage to speak out.