Put it out: University considers tighter restrictions on smoking

The University Management Committee (UMC) is considering tightening its current regulations with regards to smoking cigarettes on campus. As early as fall 2012, Pepperdine could become a smoke-free university. Although it would be referred to as a smoke-free campus, smoking would be allowed in designated areas. If the UMC formally approves the policy change, smokers would have to adhere to stricter regulations.

“It’s fundamentally an issue of public health. The university has a responsibility to maintain an environment that is safe and healthy for people that work here and for students that go to school here,” said Jay Brewster, associate provost and professor of Biology at Pepperdine. Brewster and the UMC met last week to discuss the possibility of transitioning to a smoke-free campus.

Currently, smoking inside any University-maintained building or vehicle is prohibited. In conjunction with California law, it is illegal to smoke within 20 feet of an entrance. The new policy would be an intermediate step in smoking restriction. The long-term goal is a completely smoke-free campus, but the administration understands that accomplishing this is challenging. As a compromise, smoking would be allowed only in designated smoking areas.

“Right now, Pepperdine’s policy on smoking is pretty permissive. The new policy would be more restrictive,” Brewster said. The UMC is seeking an open dialogue concerning the issue and came to this compromise after reviewing feedback from students and faculty. “The preference in general we had from feedback was that we should go to an intermediate position, where some smoking areas are allowed — limited but provided,” Brewster said. 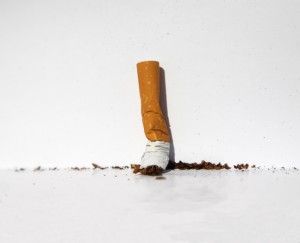 “The Case for a Smoke-Free Campus,” a UMC report, identified concern for student health as a principle factor in the discussion: “Motivated by concern for the student, it is the responsibility of University governance to put policies in place that protect the health of students, and to generate a respectful environment on campus.”

The UMC, subcommittee and campus planning committee are carefully mapping out areas that would accommodate smokers, yet are not in high traffic areas. The designated smoking areas would most likely be on the periphery of main campus.

Enforcement of the new policy would be mainly peer enforced. This means that if someone was violating the policy, another student could notify the Department of Public Safety or the Dean’s Office and proper action could be taken. Disciplinary action could range from a warning to a fine. But, according to Brewster, the University is not interested in a heavy-handed policing effort.

Statistics show that smoking is a common behavior among Pepperdine students. Twenty percent of males and 10 percent of females surveyed reported that they had smoked recently. Tobacco use among undergraduate students increases during their four years at Pepperdine. These statistics are concerning because addictive behaviors are often established during the college years.

“I definitely support this new policy because it is exhausting dealing with secondhand smoke all the time,” freshman Annie Jeong said. “One person smoking in a high traffic area affects so many people negatively.”

However, some students are a little skeptical of the changes. Freshman Elliott Bassile said he is already mindful to minimize the impact of his smoking on others.

“I understand the health concerns and I would be fine as long as there are at least some spots to smoke. But, one thing I do already is try to avoid people when I do smoke,” Bassile said.

The data on the risks of secondhand smoke reveal serious impacts on health. The U.S. Environmental Protection Agency (EPA) has classified secondhand smoke as a Group A carcinogen, meaning there is clear data that identifies these agents as a cause of human cancers. The number of deaths attributed to secondhand smoke is beginning to multiply. The Centers for Disease Control estimates that environmental (secondhand) smoke kills 46,000 people each year.

If this policy is implemented, the UMC will look at its effectiveness and at a later date discuss the option of becoming completely smoke-free like other colleges across the country. According to the American Nonsmokers’ Rights Foundation, approximately 648 college and university campuses are 100 percent smoke-free with no exemptions in the United States.

Last week after an unexpected rainfall, residents parked in Rho Parking Lot walked to their cars to discover a flyer promoting...
Copyright 2013 Jupiter Premium Magazine Theme
Back to top