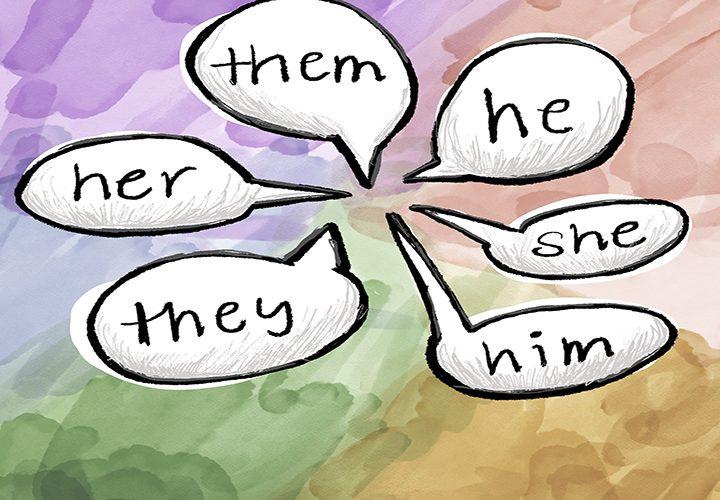 Pronouns are not just grammatical tools for clarity. They are also thoughtful means of self-identification and expression. With the increased global dialogue on the use of gendered pronouns in the identification of those in the transgender and gender-nonconforming communities, two questions arise: Why are pronouns so important, and what are the implications of using the incorrect pronoun?

While personal pronouns such as you and me come with no implication of gender, this linguistic concept has the ability to affirm one’s identity or to tear it down through its more gendered uses.

In the U.S., 1.4 million individuals identified as transgender or gender-nonconforming in 2016, according to the Journal of Language and Social Psychology. Even if only a portion of those who answered the survey are publicly out and have clearly stated they use an identifier different than that imposed upon them at birth, those individuals and those who have not publicly identified their pronouns face the risk of being misidentified every day.

Because gender and appearance are not mutually inclusive, misgendering has the potential to permeate casual discourse, according to the University of Wisconsin’s Lesbian, Gay, Bisexual, Transgender, Queer Plus Resource Center. This includes incorrect usages of he, she, they, neo-pronouns not yet officially recognized in traditional language constructs and other pronouns.

To solve this problem, there is a communal push across American higher education toward sharing pronouns, even manifesting in the official, institutional collection of student’s pronouns at universities like Harvard.

University of California, Davis, among other similar-minded universities, go so far as to provide their students with educational articles about the proper use of differing identifiers, distributed through their online LGBTQIA Resource Center.

The discussion has even spread to high school-level extracurriculars such as speech and debate. The National Speech & Debate Association publicly supports the use of inclusive language and has digitally published a best practices guide for pronoun usage.

This propagation of knowledge and understanding throughout the world of academia, however, does not always translate to society as a whole.

Languages are often conducive to a cis-sexist narrative, some being established with decidedly male generics, as told by the Journal of Language and Social Psychology. This only heightens the importance of using correct pronouns to provide a space in which people feel comfortable to identify as they are to combat the inherent oppression of male-dominated linguistic systems.

Misuse of gendered pronouns, while possibly coming from ignorance, can also come from a place of discrimination and intentional disrespect. Regardless of intent, the effect is further cisgenderism and stigmatization of these communities, leading to “victimization, isolation and discrimination from society at large, as well as among peers, family members and schools,” as told by the International Journal of Transgenderism.

Beyond psychological impacts, misgendering someone can have negative physical health effects as well. The minority stress model, a model that links sexuality-based discrimination to health, provides a more specific lens when applied to gender rather than orientation. A study by Quality of Life Research found a similar trend of negative health effects leading to an increased risk of somatic disorders in those who are gender-nonconforming.

Looking at the health-related quality of life (HRQOL) index, researchers found a correlation between gender nonconformity and risk for a poor HRQOL.

Given the negative social, psychological and physical implications of language — and how it is used — then why do people refuse to use correct pronouns when it is in pursuit of the greater good?

One argument that contrarians reference when advocating against gender-neutral pronouns, in particular, is alleged grammatical correctness. The singular they, by design, is a non-gendered pronoun to take the place of she or he. With this in mind, society has stirred up a debate surrounding the validity of the use of the singular they. However, one need not forget that literary greats such as William Shakespeare and Jane Austen used the singular they in their works.

It seems, then, that as language ebbs and flows, this modern focus on gender pronouns and the popularization of using inclusive language should be heralded as a societal change long overdue.

Many institutions, however, have embraced the shift in language.

In 2012, the Washington Post updated their stylebook to include they as a non-gendered option. The Associated Press conditionally updated their stylebook in 2017, stating the singular they is acceptable in limited cases. Likewise, The American Psychological Association formally adopted the use of the singular they in their publication manual Oct. 31, 2019.

More research is anticipated regarding the positive influence that the support of gender identity has on young people. Shows of support from friend groups, including correct pronoun usage, were correlated with “finding more meaning in life and a future-oriented outlook,” as told by the Journal of GLBT Family Studies.

While correlation does not inherently indicate causation, it certainly is indicative of some sort of relationship between support and well-being.

Those who are cisgender and may not find themselves in the position to defend their gender expression have the ability to use their privilege in a powerful way. Normalizing the act of sharing pronouns, using correct pronouns of those they meet and interact with, and promoting positive discussion surrounding non-gendered pronouns are three ways in which they can support and respect those who may be transitioning or who do not conform to a gender binary.

Correction of a pronoun usage mistake can help to mitigate any offense caused and reinforce that the error was not one of malicious intent. Educating oneself about pronouns and their importance can provide further tools to help ally with those who are at risk of being misgendered.

Basic human respect and decency are at stake each time the issue of pronouns arises. Every person deserves to be recognized in the way they wish to be, solely on this principle. Given the clear personal and societal benefits of recognizing, accepting and supporting each person’s gender identity, there should be no question of why one should respect another’s pronouns. 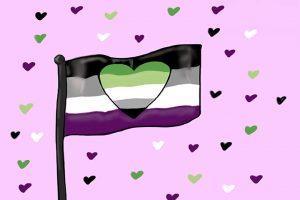 Art by Ally Armstrong A boy and girl fall in love. They have a whirlwind marriage and have three children to round out the family....
Copyright 2013 Jupiter Premium Magazine Theme
Back to top