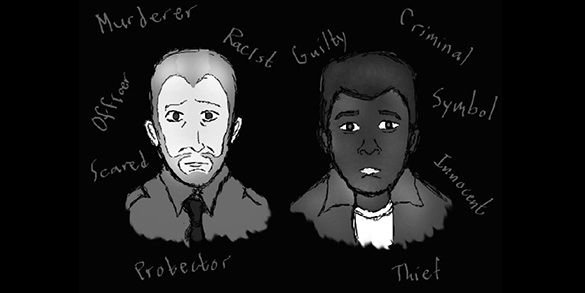 In the advent of Ferguson, misguided efforts to weave an ideological narrative about civil rights crises, or institutionalized racism, only intensifies racial animosity in America while undermining the fairness and efficiency of our justice system.

Of the many regrettable constants of human nature, our yearning to feel that our lives have significant meaning has been prominently proven by the national outrage over a Missouri shooting.

By participating in the outrage, we as Americans also feel that we are making a difference in our communities to benefit future generations, and that we are evolving into a more enlightened and ethical species.

So too, we feel that we are confronting and rectifying institutionalized evils too long abided by our prejudiced and narrow-minded ancestors.

Subscribers of this progressive sentiment often portray their respective agendas as modern-day “civil rights movements,” a term pleaded so flippantly and thoughtlessly in the present day that it has come to shed any semblance of objective meaning it may have originally retained. The most recent of these so-called movements conspires to exploit the shooting of a black man in Ferguson as some symbol of ongoing racism.

The riots ensuing from said local crime story — as it is — have captured the attention of such community organizers and politicians as Jesse Jackson, Al Sharpton, President Barack Obama and Attorney General Eric Holder. The problem is that neither Obama, Jackson nor Holder has the slightest business commenting on the regrettable but by no means concrete events that occurred last month.

The proper administration of justice belongs not to political or racial demagogues but to the due process of law as prescribed by our constitutional Framers and achieved through a fair and speedy trial by a jury of one’s peers. When the former conspire to impose their ideologically driven whims over the latter, not only does justice suffer, but race relations deteriorate even further where they ought to improve.

Regarding the culpability of the officer involved, I write this not to prevail one position or another upon readers, but to dissuade them from forming any position at all for as long as both parties decline to support their accounts with demonstrable proof.

Unlike many on the left and right extrema of the spectrum, I won’t presume to know with definite certainty the circumstances of the shooting in Ferguson, nor will I vainly try to appropriate the tragedy as a warrant for some social agenda.

As the situation stands, neither the police force nor Michael Brown’s sympathizers have presented very compelling evidence for their conflicting narratives, although multiple witnesses have closely corroborated the testimony of the man accused, according to the New York Post on Aug. 19. Furthermore, sources inside the St. Louis County Police confirmed to Fox News a day later that Officer Darren Wilson was indeed hospitalized for a fractured eye socket following the encounter.

Still, none of that should matter in this case anyway, as the burden of proof falls not on the defendant, who rightly enjoys the presumption of innocence until indubitable evidence of guilt is provided, but on the prosecutors, who in the absence of such requisite evidence, have responded thus far mainly by inciting violent mobs, misconstruing unsubstantiated claims as established truth, petulantly reenacting the scenario as they imagine it played out and pleading the ever-useful retreat of the race card.

The grand irony undergirding this whole debacle is that many of the outraged spectators blindly accusing Wilson of racism and demanding his incarceration thereby will turn about and appeal in the same breath for such noble-sounding principles as tolerance, fairness and what we may designate the cardinal relativist virtue of “nonjudgmentalism,” which proponents will usually interpret to mean the absolute and unconditional acceptance of everything a given person says or does (unless, as it is often and illogically implied, said words or deeds violate the tenets of nonjudgmentalism).

Nonjudgmentalism may be a worthy or even a biblical goal in so far as it means withholding from unfounded condemnation, gossip or false testimony, but this aspect appears to have eluded the principal drivers of the Ferguson outcry, whose ideological fervor and unmitigated loathing of Wilson have far eclipsed any slim regard they may have once possessed for interracial understanding. Such displays of hatred, far from mending the wounds of grieving families or bridging racial divides, only aggravate existing tensions between demographics while obstructing the search for the real justice in a court of law.

Whether in the case of Brown, or Trayvon Martin or Matthew Shepard before him, substituting the earnest pursuit of truth for purely political ends has always entailed perversions of justice and the further entrenchment of prejudice in the American psyche.

For the family, friends and innumerable supportive strangers of Brown, spiritual healing can never derive from spite or indignation, but only from forgiveness and a genuine interest in determining what truly transpired that day and why.