Pepperdine’s pick for a win on Sunday 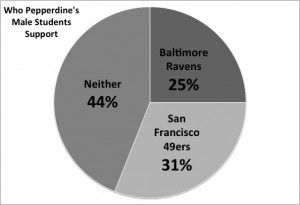 More than 100 students of Seaver College were asked by the Graphic whom they were rooting for to win Super Bowl XLVII: the San Francisco 49ers, the Baltimore Ravens or neither. About one-third

of students surveyed did not know which two teams were playing on Sunday. 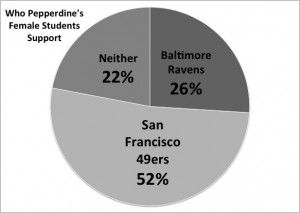 Once informed of which teams were playing, most students were quick to iden- tify with the team from their geographical region (i.e., most 49ers supporters mentioned they were from California), but many students are supporting either the 49ers or Ravens in

relation to their favorite team that did not make the Super Bowl.

Freshman David Hewett, from Midland, Texas, is not normally a Ravens fan, but jus- tified rooting for them on this occasion: “The Ravens beat
the Denver Broncos, and since I’m a San Diego Chargers fan, the enemy of my enemy is my friend.”

Several Raven supporters are hopping on the purple- and-gold band wagon because of Ray Lewis, the lovable 37-year-old linebacker who is playing his last season before retirement.

“I love how Lewis just sparks up the field,” Hewett said.

Despite Lewis’ likability, the 49ers are the most popular team on campus for Sunday’s game in New Orleans. However, the gender dispar- ity shows a lot more male students supporting the 49ers because more female students were either indifferent about the game or unaware about the teams playing. The two pie charts show the data collected from the survey.